Economic progressivism isn't just popular now -- it has been for years

Those suddenly seeing a "liberal resurgence" are missing one big thing: The last two decades of American history 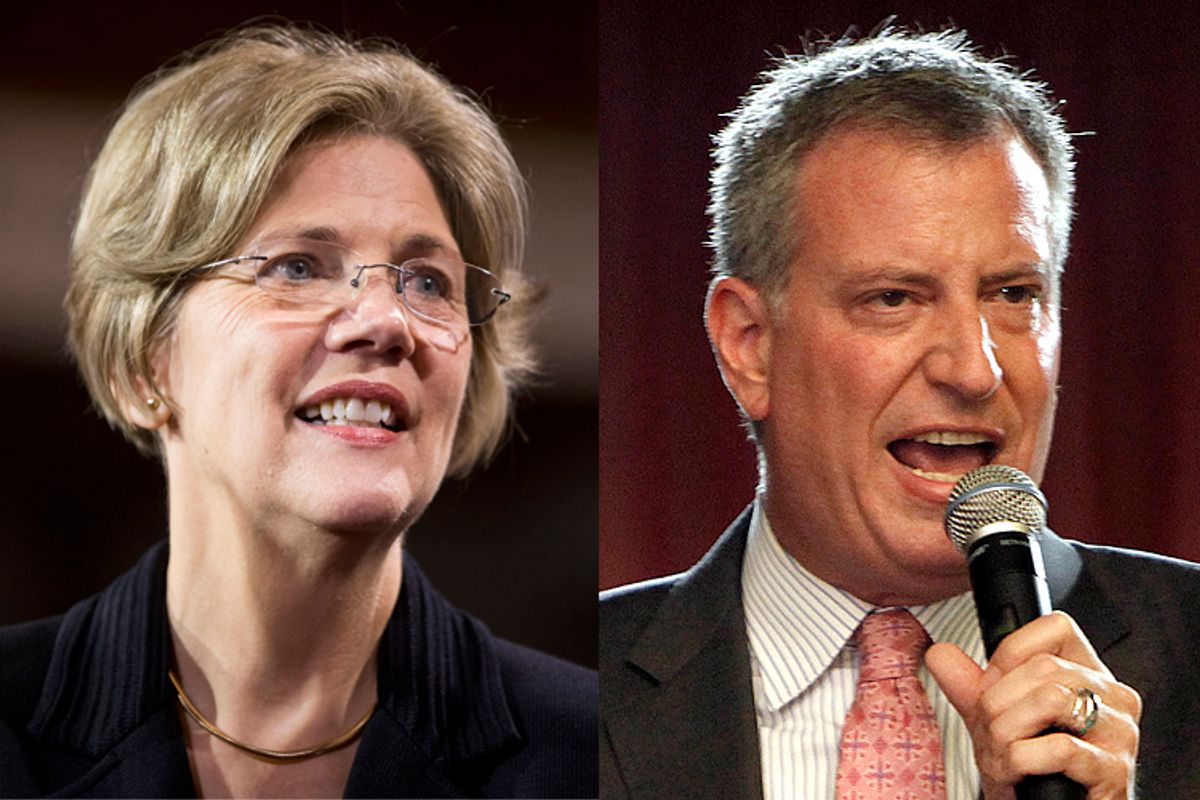 When Bill de Blasio was sworn in as mayor last week, the Washington establishment took it at as a sign of a “liberal resurgence” in America on economic issues. “The progressive wing of the Democratic Party is stirring,” the Washington Post’s Dan Balz observed. “Our Republican colleagues should take note,” warned Sen. Chuck Schumer, vowing to focus on issues like minimum wage and helping the unemployed. “Certainly we’re going to build on the progress we’ve made to reduce the deficit, but it is no longer the most important issue that we face.”

How bad is their blind spot on this? Rewind to the summer of 2012. Elizabeth Warren’s selection as a speaker at the Democratic National Convention was seen as such an outside-the-mainstream, high-risk gamble that pundits – and some rank-and-file party members – feared her presence could up-end the convention and cost President Obama his reelection.

“I wish we could buy Elizabeth Warren some air time,” a GOP strategist snorted. “[W]hat works in Massachusetts isn’t necessarily what will work nationally,” an actual Democratic strategist freaked. “Most Americans are optimists, not pessimists. They don’t see themselves as victims.”

A week later, it was clear that this was another case of Washington failing to understand the rest of the nation. Americans, it turned out, wanted a government that did things like protect social security, provide unemployment insurance benefits in a tough economy, and ensure a living wage for its workforce. Not only did Warren’s speech avoid catastrophe, its themes served as a blueprint for every other major speech at the convention – including those given by Obama himself and Bill Clinton.

Here’s Obama in his prime-time address:

“I refuse to ask middle class families to give up their deductions for owning a home or raising their kids just to pay for another millionaire’s tax cut. I refuse to ask students to pay more for college, or kick children out of Head Start programs, to eliminate health insurance for millions of Americans who are poor, and elderly, or disabled, all so those with the most can pay less.”

“I don’t believe that another round of tax breaks for millionaires will bring good jobs to our shores, or pay down our deficit. I don’t believe that firing teachers or kicking students off financial aid will grow the economy, or help us compete with the scientists and engineers coming out of China.”

This would be unremarkable if it were a speech at Netroots Nation by a progressive House candidate trying to woo the convention hall. But this was the president of the United States using precious TV minutes to connect to a general election audience.

And here’s Bill Clinton’s speech that pundits said was a turning point in the campaign:

“The direction America has to take to build a 21st-century version of the American dream [is] a nation of shared opportunities, shared responsibilities, shared prosperity, a shared sense of community.

Sounds pretty Elizabeth Warren-ish. And, of course, this was pretty much the core message for Obama the rest of the campaign. It would form a contrast with Mitt Romney’s vision of a nation of “makers” and “takers,” where 47 percent of the country saw itself as victims. And, in the face of a struggling economy and “you didn’t build that,” American voters chose a progressive vision for the economy.

Even Romney himself seemed to admit it, saying inartfully, after his loss, “It’s a proven political strategy, which is, give a bunch of money from the government to a group and guess what? They vote for you.”  What he seemed to be conceding, in his own special way, was that Americans wanted an activist government that would help lift up those in need -- something his campaign tacitly admitted when it distanced itself from running mate Paul Ryan's plan to gut Medicare.

It wasn’t just 2012. Way back in 1992, President Clinton ran an explicitly populist campaign, telling voters, “The rich get the gold mine and the middle class gets the shaft. It’s wrong and it’s going to ruin the country.” Clinton didn't always govern as an economic progressive -- nor did Obama, for that matter -- but that's precisely the point. To know what's popular, look at which messages politicians use to sell themselves to voters during campaigns. That's when Americans exert some control in the process, and demonstrate what they want.

Governing, of course, is a different story; we don't make most laws based on initiatives and referenda. Congress often does its real business behind closed doors, sneaking provisions into law via fine print -- so when the legislative process is worked out, many voters are not engaged in each development. But corporate lobbyists and wealthy contributors, who don't necessarily share the same agenda as the electorate, are. The result: campaign messages approved by the broad electorate don't always translate to governmental results. So, if you want to know what the American people actually want and support, don't always look at what was enacted, but what they voted for during campaigns.

Even President George W. Bush wasn’t oblivious to the popular appeal of economic progressivism; while obviously not selling the nation on the philosophy, he famously ran in 2000 as a “compassionate” conservative, correctly reading that Americans want a government that will intervene where necessary to lift up those in need. That's also why his campaign's central message was less about the virtues of trickle-down economics (a message that hasn't worked in years), and more about changing the tone in Washington. (He also touted tax cuts, which admittedly will never be unpopular.)

Americans' hunger for compassion, of course, was a lesson Bush would re-learn in his reelection. Kicking off his second term (won largely on a message of national security), Americans revolted against his publicly aired plan to privatize social security, setting the effort back a generation. While polls from that time suggest Americans entered the social security debate willing to consider Bush's plan, they showed a clear hostility to it when they received more information. The lesson? Americans liked Social Security. (By the way, they still do, continually opposing chained CPI and other mechanisms to cut benefits -- including the political class's prized "grand bargain.")

It turns out they also back programs like unemployment insurance, and an increase to the minimum wage, according to polls. In fact, while current support for an increase to the latter is high enough to potentially spur action in Washington (as of November, 76 percent backed it), it's been even higher than that for nearly two decades. From Gallup, last year:

Although overall support for increasing the wage to $9 is high in absolute terms, it is a bit lower than Gallup found for previous minimum wage increase proposals. In 1996, 1999, and 2000, between 81% and 83% of Americans favored raising the minimum wage with question wordings that indicated to respondents that the change would increase the hourly wage by about $1. In 1995, slightly fewer -- 77% -- favored raising the minimum wage over the next two years from $4.25 to $5.15 when President Bill Clinton's sponsorship of the proposal was mentioned in the question.

So, even if Americans haven't necessarily embraced the label "liberal," a government that seeks shared prosperity by ensuring living wages for its workers, and basic assistance for those looking for work has been popular for a long time. (By the way, that's true both nationwide and in de Blasio's New York, where Fernando Ferrer cruised to the 2005 Democratic nomination for mayor using the exact same "tale of two cities" message -- before drowning in Michael Bloomberg's $100 million avalanche.)

Why has the myth persisted, then, that economic progressivism was until now in popular remission? One possibility is that there are many powerful groups -- from Republicans to business-backed Democrats to financial interests, and the corporate media that covers them --  that benefit from (and have little cause to discourage) such a misconception.

Either way, the languid economy has propelled the need for strong government action now. But those who think that the nation's support for that approach is either new or confined to the far left, are missing what's really been going on in America.