The embattled New Jersey governor tells us all that he was the real victim, “betrayed” by “stupid” aides 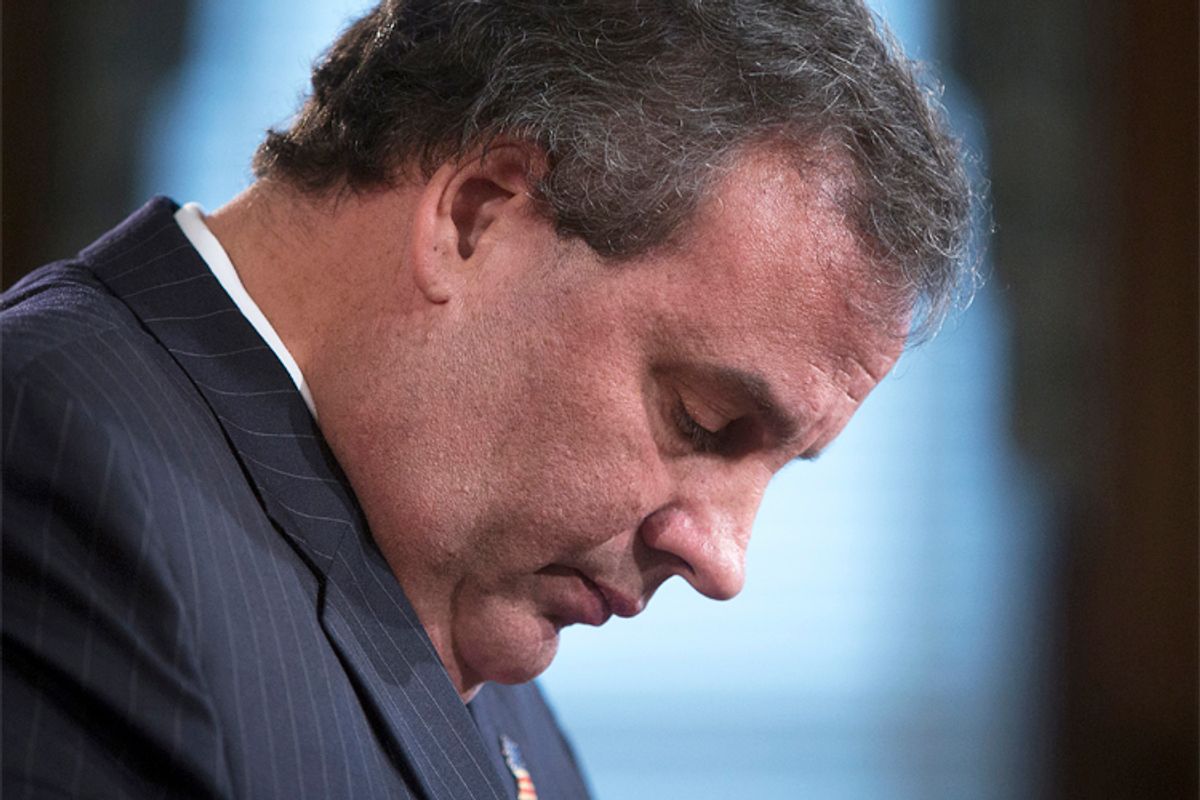 That’s what he told us Thursday, in a two-hour implosion of narcissism, self-pity and even a little bullying, although he also reassured us, "I am not a bully." It was a shea-culpa: He blamed the George Washington Bridge scandal on Bridget Kelly, his deputy chief of staff, and said that he’d fired her without even talking to her, deriding her as “stupid.”

Oh, and Kelly’s partner in the plot to punish Fort Lee’s Democratic Mayor Mark Sokolich, high school friend and Port Authority appointee David Wildstein? Not a high school friend. In fact, in high school, Christie told us,  “I was the class president and an athlete, I don’t know what David was doing.” Burn. And Sokolich? Christie never met him – although there are photos of the men meeting – and in fact, “I didn’t know his name until yesterday.”

In Christie’s telling, he was just another victim of the scandal: When he found out about the damning email published by the Bergen Record Wednesday morning, he’d just finished his workout for Chrissake! Over and over he said he’d been “betrayed” by his staff and he was “heartbroken.” He shared his “stages of grief,” and confided he hasn’t reached the anger stage yet. “The emotion I've been displaying in private is sad," he said weirdly. “I am a very sad person today.”

But he missed a chance to express sadness about the 91-year-old woman who died when paramedics were delayed by Fort Lee traffic, saying, “It’s awful to hear,” but adding callously: “I've also heard conflicting reports about the cause of death.”

“It’s awful to hear” was interesting phrasing, typical of the two-hour pity party: It focused on the experience of the person who heard the news, not the person who died or their family. It was all about Chris Christie.

National reporters are already, unbelievably, saying Christie saved himself with his performance, but that’s just the need of political sportswriters to have a competitive game to cover. Christie raised more questions than he answered with his two-hour tour de force of self-regard.  He continued to insist that maybe there really was a traffic study that motivated the lane closures, when New York officials have vehemently denied it. Christie insisted he didn’t believe the lane closing could be “political retribution, because I didn’t think [Mayor Mark Sokolich] ever did anything to us.” (As if retribution might have been OK if Sokolich wronged him?)

The former prosecutor declared his determination to get to the bottom of the plot – but he didn’t bother to talk to Bridget Kelly before he fired her: “I am not interested in the explanation” of why she lied, he said. He didn’t talk to former campaign manager Bill Stepian, either, before asking him to step down as head of the state Republican Party. He said he didn’t want to be accused of interfering with an investigation; he might have also wanted to maintain plausible deniability.

There were other small, weird contradictions: He said he’d just found out about the emails yesterday – but he also claimed he had two sleepless nights over them. He told us he rarely raises his voice, even though he’s got staffers trailing him and proudly posting his blowups on YouTube. I suppose it’s possible he only yells at teachers, reporters and uppity constituents, but not his staff. He made self-aggrandizing and fairly easy-to-disprove claims, like he’d never even heard Sokolich’s name until Wednesday.

Just when you’d think it was about to end, he’d go back to how “heartbroken” and “betrayed” he was. It was all about “me, me, me,” with only occasional flashes of semi-genuine contrition.

If you like Chris Christie, this is probably the kind of thing you like. (Joe Scarborough, for instance, tweeted that questions remained, but that Christie "did a good job in his press conference today.") But Christie did not help himself on the national stage. It was reminiscent of his narcissistic 2012 Republican convention keynote speech. Big donors can’t be reassured by the lingering scandal. Even in the best case scenario, Christie comes off as an incompetent manager whose aides plotted against his political enemies behind his back.

In the worst case scenario, Christie knew more than he admitted on Thursday, and he won’t have any worries about 2016 – because he’ll be fighting too hard to keep his job as governor.