Move over, de Blasio: Meet the big-city mayor vowing to get his city a $15 minimum wage

Seattle Mayor Ed Murray says public workers will get $15/hr within months, and private sector workers could be next 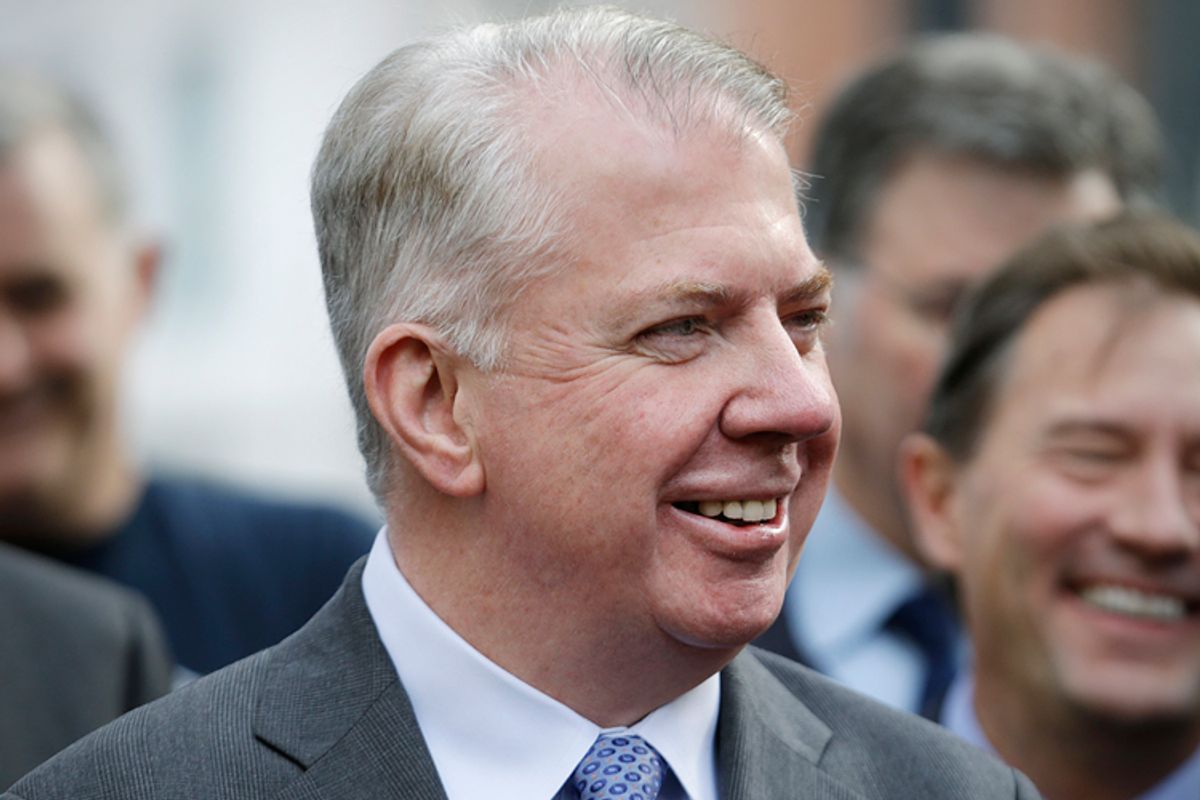 Three days before being sworn into office as Seattle’s Mayor, Ed Murray signed his first executive order: directing city departments to develop a plan to start paying city employees at least $15 an hour. That order follows Murray’s December announcement of a task force charged with developing a proposal to raise private sector wages.

Interviewed this week, Murray told Salon that public employees “should have confidence” they’ll be making at least $15 “in the next several months” and “I think that we are gonna get to $15” for Seattle’s private sector workers as well. The new mayor rejected right-wing claims that government worker raises come at private sector workers’ expense, and a socialist council member’s allegation that he’d initially avoided the $15 issue as a candidate. Murray credited fast food strikes and a $15 referendum in nearby Seatac with raising public awareness of the need for a raise.

“You can’t build a strong middle class by selling yachts and derivatives,” Murray told Salon. A condensed version of our conversation follows.

This executive order, regarding public workers, talks about “development of a minimum $15 per hour minimum wage …” How much of a concrete commitment is embodied in this order, in terms of public workers actually getting to $15 an hour in the foreseeable future?

We are dealing with city employees, and there’s about 600 who are making less than $15 an hour. And the estimate at this point is that would cost the city about $700,000. And I believe, with council approval, that we will be able to do it in a very short time, in the next several months.

It appears -- and again, signing the executive order was signing an order instructing our new budget staff to begin the research -- but it appears that the city, Seattle itself has been moving out of the recession faster than the rest of Washington state, and it appears we can find it within existing revenue.

People who are among those 600 workers, how much confidence should they have that a year from now they will be making that $15 an hour?

They should have confidence that they will be making it in the next several months.

The wage standard or workers Seattle employs directly -- what’s the significance of that for the city of Seattle?

Seattle is a city that is booming. And one of the downsides of the boom -- and it’s a blessing to have an economic boom, don’t get me wrong. But one of the -- one of the byproducts, I guess is a better word – is a city that’s becoming less and less affordable for average-wage, but particularly for lower-wage workers.

And I have convened a group of business and labor leaders to look at raising the minimum wage for all employees in the city. But I believe I have to lead by example and begin with city employees.

And what we’re trying to get at here is, you know, we know that the middle class has shrunk. We know the disparity between those who are wealthy and those who are not has grown significantly. And we see that in our own city.

So that’s what we are attempting to do, and I feel like we need to lead by example.

Did this executive order grow out of the commission that you announced in December that’s looking at the minimum wage more broadly?

They are related. It did not grow out of it.

Gov. Scott Walker in Wisconsin talked about an era of “haves” and “have-nots,” where the “haves” are the public workers and the “have-nots” are the taxpayer. This argument that better wages for public sector workers come at the expense of private sector workers – what do you make of that?

Well, I couldn’t disagree more. Now, of course I’m not aware of their economic -- the economy in Wisconsin. But we are an economy where people are doing tremendously well, yet others are not doing well at all. And I do not see by raising the buying power of lower-end workers we’re doing anything but stimulating the economy.

You know, when the middle class shrinks the economy shrinks. You can’t build a strong middle class by selling yachts and derivatives. You need a middle class that can actually buy things like a toaster, and a washing machine, and a microwave, and a computer for their kids. That’s how you stimulate an economy.

So I think this does not come at the expense of the taxpayer. I think it stimulates the economy, and I think it was a missing part of the national disc at the height of the great recession. I don’t believe we stimulated it enough.

This commission that you announced last month on the minimum wage more broadly: What is the range of policy results that we could see come out of it?

It’s a task force … We gave ourselves four months to address this issue of raising the minimum wage for all employees within the city of Seattle. I want an ordinance that I can give to the council at the end of the four-month period.

Now there are a lot of things on the table. There are employers that have come forward and pointed out that they pay their workers 70-, $75,000 a year if you include other kinds of benefits that they supply to them -- and then there are others that offer nothing but the basic state minimum wage. We have small businesses in our neighborhoods that have two or three employees, that are struggling, and really have not recovered from the Great Recession. How does it apply to them?

Those are the sorts of questions we’re asking this group to look at.

So is the result going to be an ordinance that puts into law a $15 minimum wage for some private sector workers in Seattle?

So, I don’t know the answer to that, because we’re asking -- everything is on the table. I mean, if we ask labor to come in, we ask business to come in, and we ask them to negotiate in good faith, then everything needs to be on the table. How we get to $15, I think that’s open to discussion. But I believe we should get there.

And again, I think we need to explore where did the number $15 come from? Is that based in real studies, or is that a slogan? These are the issues that we need to look at. I think it’s really hard for people who make $15 to live well.

So I think that we are going to get to $15. But if I’m negotiating in good faith, I have to be open to what the end product is going to be.

What is the impact of the fast food strikes that we’ve seen in Seattle and around the country, and the referendum that passed in Seatac, Wash., in terms of what seems politically possible or desirable in Seattle?

Well you know, there’s been no polling done, so I can’t give you, you know, a scientific answer. But I do think it has raised the awareness of folks to something that they understand and they see: that there are people that are struggling. That it’s hard for people to live in this city because of the cost of housing and other costs. So I think those things have an impact.

You know, I grew up in Seattle in a working-class family. My father worked for what was then Bethlehem Steel. And we grew up in a neighborhood -- there were seven kids in the family, and my parents could buy a house. Today that is simply not true. My husband and I … before I became mayor six or seven days ago, based on what I made as a legislator and his salary, we couldn’t buy the house that we live in.

And if we want diversity we need economic diversity. Diversity has many aspects to it.

The argument was made to me, by the newly elected socialist council member Kshama Sawant, that both you and your opponent were “very carefully avoiding” the $15 issue until it was brought up by her campaign and by fast food workers. Do you think that’s a fair criticism?

It is absolutely incorrect, and it’s really sad to see progressives questioning other progressives’ motivations.

I have a history as a legislator working on issues related to the – related to poverty, related to civil rights. I’m on film at a forum that the local newspaper, the Stranger, did, and a youth organization called the Bus did. They asked us to stand in a square -- it was done more as a game/forum for candidates – and they asked who supported a $15 minimum wage. I stood in that minimum wage [square]. I had no idea who Sawant was at the time. I wasn’t paying attention to her race.

And the individuals in labor who organized the fast food workers were labor leaders who supported my campaign, and who I have worked with for years.

So again, it is -- given my own history, I think it’s unfortunate that she is questioning folks’ motivation. I certainly am not questioning hers. My experience, particularly in spending 17 years working on gay and lesbian – first the civil rights bill and then the marriage bill – is: When progressives are divided and questioning each other, we lose every single time.

Given the ability of business to pick up and move, and given what’s under the control of the federal government, how much can individual cities do to achieve a level of economic justice that we don’t see nationally?

You know, traditionally cities have been incubators of social change in this country.

Civil rights laws were often passed by cities before they were passed by states and by the federal government.

The first gay rights protections were passed by Seattle, San Francisco and cities like that, before states did it. I think when it comes right now to a very dysfunctional federal government, and many states are not particularly functional, I think more and more people are looking to cities -- particularly the progressive movement -- to be the incubators of progressive ideas and making government work. I mean, there’s a book called "The Metropolitan Revolution" that came out of the Brookings Institution, that illustrates how cities are moving forward in governing in ways that states and the federal government are not.

I think we can be very influential at the state level and at the national level.