More and more local departments are splurging for heavy-duty combat machinery. Here's why we should all be nervous 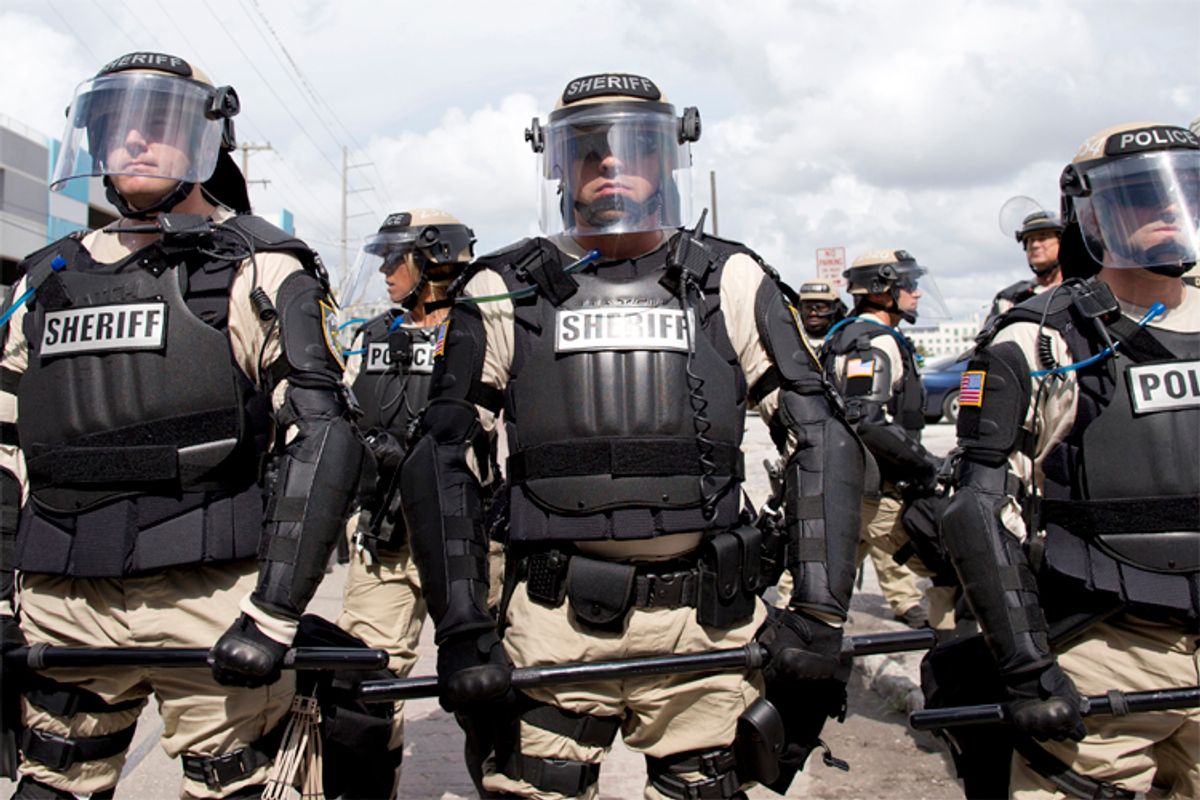 What a Christmas little Bastrop had! It's still a mystery how Santa Claus got it down the chimney, but Bastrop got a nifty present that most children could only dream about: A big honkin', steel-clad war toy called MRAP.

But Bastrop is not a six-year-old child, and an MRAP is not a toy. Bastrop is a Texas county of some 75,000 people, and MRAP stands for "Mine-Resistant Ambush Protected." It's a heavily-armored military vehicle weighing about 15 tons — one of several versions of fighting machines that have become the hot, must-have playthings of police departments all across the country.

Are the good people of Bastrop facing some imminent terrorist threat that warrants military equipment? No, it's a very pleasant, laid-back place. And while the county is named for a 19th century land developer and accused embezzler, it's never been a haven for particularly dangerous criminals — indeed, the relatively few crimes in Bastrop today don't rise above the level of routine police work.

Even the sheriff's department, which is the proud owner of the MRAP tank, says it doesn't have a specific use for the machine, but "It's here if we need it." Well, yeah ... but that same feeble rational would apply if the county decided to get an atom bomb — you just never know when a big mushroom cloud might come in handy!

What we have here is the absurdly dangerous militarization of America's police departments. Our sprawling Department of Homeland Security and the Pentagon (which gave the MRAP to Bastrop) are haphazardly spreading war equipment, war techniques and a war mentality to what are supposed to be our communities' peacekeepers and crime solvers.

Having the technology and mindset for military actions, local authorities will find excuses to substitute them for honest police work, turning common citizens into "enemies." As a spokesman for the Bastrop sheriff's department said of the MRAP, "With today's society ... there's no way the thing won't be used." How comforting is that?

But now, let's turn from the battlefield to the gridiron.

In the ever-escalating competition to be the No. 1 big-time college football program in the nation, Ohio State University bulked up last fall with a monster recruit named Maxx.

Actually, it's not the coaching staff that signed up this brute, but the OSU campus police department. And the recruit's full name is MaxxPro — not a player, but a 19-ton armored fighting vehicle built by a pentagon contractor to withstand "ballistic arms fire, mine fields, IEDs, and Nuclear, Biological and Chemical environments." Wow, college games really have gotten rough!

But the campus PD, which received the MaxxPro as a gift from the Pentagon (ie, us taxpayers), says it's not just playing games, but deploying Maxx for things like hostage scenarios, killers loose on campus, and extreme flooding of up to three feet. Well, have such things been a problem at OSU? Uh ... no. Would a huge, slow, gas-guzzling vehicle designed for warfare be effective if any of the above were actually to occur? No response.

Oh, by the way, operating these machines requires specially trained personnel — is anyone in the department qualified? Again, no answer. Also, the vehicles are subject to frequent rollovers, and they lack the ability to go off-road or to maneuver in confined areas. That doesn't sound ideal for a college campus. Not to worry, though, for the gendarmes said they were adjusting Maxx to fit their needs. How? Removing the top gun turret and repainting the vehicle.

OSU police finally admitted that Maxx would mostly be used to drive them around campus and provide a police "presence" on football game days. Great — police authorities now believe they need a show of military force to keep tailgaters in check.