Sales of "Mein Kampf" are spiking -- what's behind it? 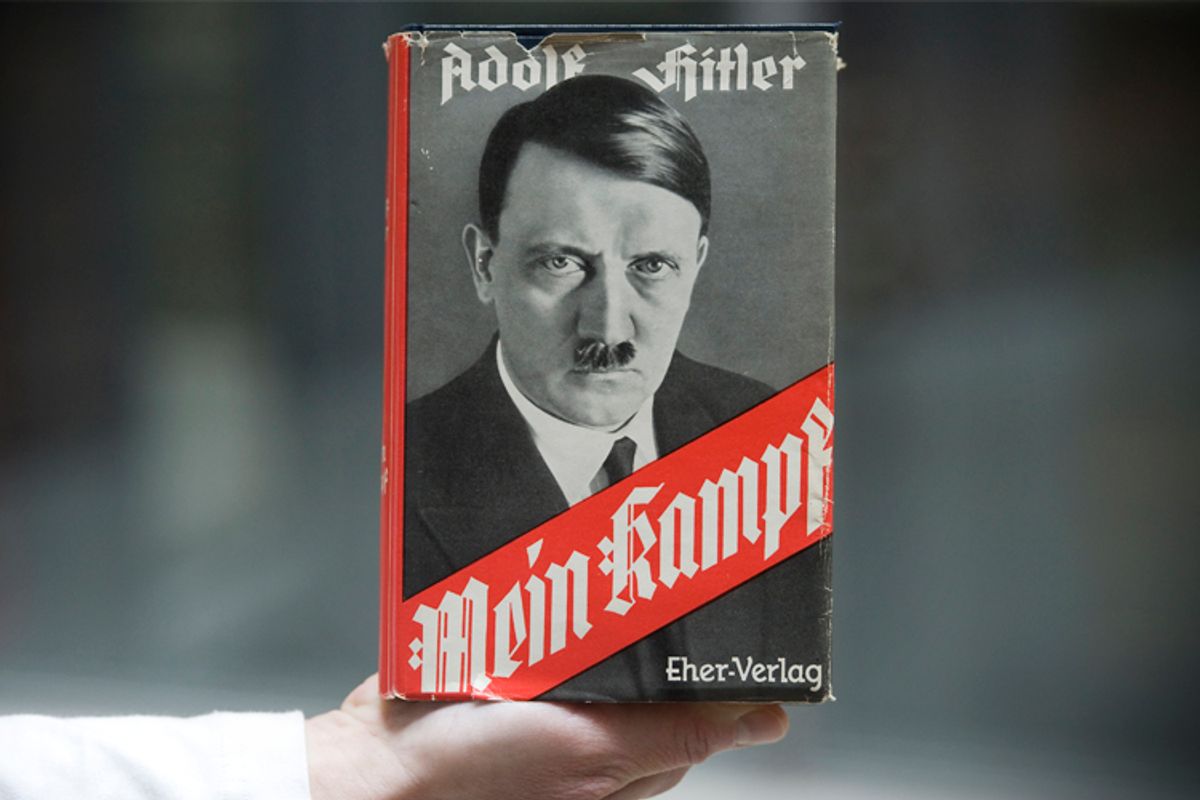 The nonfiction bestseller list is traditionally peppered with controversial figures and provocative subject matter. But among the current crop of hot authors, you still might not expect to find the most notorious figure of the 20th century. Meet Adolf Hitler, Nazi mastermind and unlikely e-book champion.

As Chris Faraone first noted earlier this week on vocativ.com, "Mein Kampf," Hitler's 1925 quasi memoir and manifesto on the "the Jewish peril," has become a full-fledged e-book chart-topper. Across platforms like Amazon, Barnes & Noble and iTunes, the book, whose English translation copyright holder Houghton Mifflin hasn't even released in paperback in 16 years, is wiping up the floor with more contemporary political authors. Farone writes, "All seven of [Glenn] Beck’s books trail Herr Hitler’s nearly century-old tell-all, which consistently holds its own against new e-blockbusters like 'Game Change' by John Heilemann and Mark Halperin, 'This Town' by Mark Leibovich and Nate Silver’s 'The Signal and the Noise.'"

Nazi Germany – and in particular its chief mastermind – have long held a fascination for readers of world history. But reading a book, many of us commonly assume, is somehow tantamount to an endorsement of the author. We may yearn to understand why terrible things happen, but from a safe distance. If you happened to be sitting in a coffee shop perusing a copy of Ron Rosenbaum's "Explaining Hitler," you'd likely not get a second look. If, however, you should find yourself in a park one bucolic afternoon intently studying "Mein Kampf," you might get some quizzical reactions. It's one thing to try to explore what Rosenbaum calls "the origins of his evil"; it's something else to choose to crawl inside the demented mind of the man himself.

Perhaps that's why, Faraone speculates, "Mein Kampf" has become an e-book hit. You don't have to go to a store and ask for it. You don't have to conspicuously pull it out on the commuter train – it can be neatly hidden by a Kindle cover. An e-book means that now a reader can curiously turn over the rock that is "Mein Kampf" and see what's wriggling underneath, and seemingly no one need ever know. But as Richard Lea points out in the Guardian, "The privacy electronic readers are availing themselves of isn't exactly private. The person opposite you on the tube may not know you're following der Führer on your Kindle, but Amazon sure as hell does."  Enjoy your illusions of privacy until your "recommendations" scare the crap out of you.

Another reason for the surge in sales may be its bargain rate. A Kindle edition of "Never Trust a Liberal Over Three—Especially a Republican" will set you back 15 bucks. "Mein Kampf" is just 99 cents. Even if a person just wants to flick through it to get the gist, it's a minor financial investment.

There's no doubt that the world still teems with madmen with frightening ideas and their sympathizers. Take a look at the online reviews of Nazi-themed memorabilia sometime, if you have the stomach for it. But for those who are simply trying to understand the past, there is value in looking at it in its most direct forms. If you've ever seen "Triumph of the Will," you can see Hitler not as a historical abstraction but as a man, one whose ability to rouse a crowd remains chilling. You understand a little more of what happened in Germany in a way that reading someone else's account doesn't necessarily provide. And maybe that's why people want to read "Mein Kampf" too. Not to sympathize with the author but to grasp the unfathomable: how a lunatic rose to such power and wreaked such havoc. As one of Hitler's online reviewers says, "Sun Tzu said you must know your enemy. We read about those we regard as dangerous, or wrong or criminal in order to avoid that type of individual ever encroaching into power again."