Because we need more Kathryn Bigelows: Segregate the Oscars by gender!

Award shows are great for boosting the profiles of women in Hollywood, but they can still do so much more 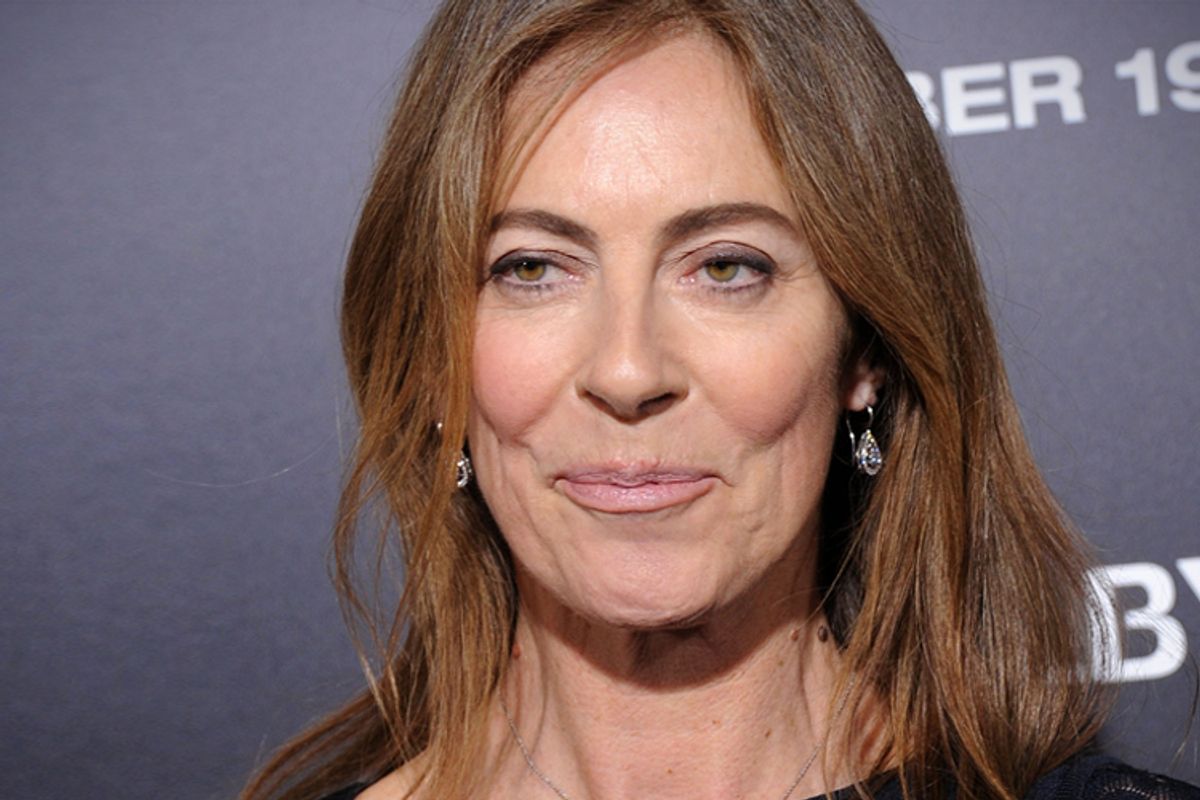 Obviously, we don’t live in that world. Despite all the Jennifer Lawrences and Melissa McCarthys, Hollywood is still dominated by a conspicuous gender bias. Swedish cinemas made news in November after several adopted the Bechdel test to identify gender bias in the material of various films—going so far as to exclude failing films from cinema lineups. It’s certainly a problem worth addressing, but perhaps the gravest examples of Hollywood gender bias lie behind the scenes. The New York Film Academy compiled this helpful infographic to illustrate some of the more shocking statistics. Among them:

• Only 10.7 percent of those films featured a gender-balanced cast (half of the characters being female).

• There are 2.25 working actors for every working actress in Hollywood today.

• Ninety-eight percent of cinematographers are male.

• Only 35 women were nominated for Academy Awards in 2013, as opposed to 140 men. There were no women nominated for directing, cinematography, film editing, original screenplays, or original scores.

Clearly, gender-based award categories are essential to maintaining even a tenuous presence for talented women in Hollywood. The award for Best Actress in a Leading Role forces that 77 percent of the Academy to recognize the wealth of female excellence in acting—the Meryl Streeps, the Annette Benings, the Viola Davises. It forces the overwhelmingly male Hollywood establishment to budge up and make room for equally talented women.

And yet, 28 percent of female Oscar nominees in 2013 were actresses. Only seven percent of male nominees were actors. It appears the best vehicle for female success in Hollywood is through acting. So while those awards shows are highly effective in elevating dramatic talent in a gender-egalitarian fashion, they do very little to improve the position of women behind the scenes. (Which is the only category outside of acting in which women dominate? You guessed it: costume design.)

Here’s another statistic: Only four women in the 85-year history of the Academy Awards have ever been nominated for Best Director. Lina Wertmüller (Seven Beauties, 1975), Jane Campion (The Piano, 1993), Sofia Coppola (Lost in Translation, 2003), and Kathryn Bigelow (The Hurt Locker, 2008). So far, Bigelow is the only woman to take home the golden statuette.

During that same 85-year span, only seven female producers have won the award for Best Picture. Julia Phillips (The Sting, 1973), Lili Fini Zanuck (Driving Miss Daisy, 1989), Wendy Finderman (Forrest Gump, 1994), Donna Gigliotti (Shakespeare in Love, 1998), Fran Walsh (The Lord of the Rings: The Return of the King, 2003), Cathy Schulman (Crash, 2004), and Kathryn Bigelow (The Hurt Locker, 2008). Fun footnote: each of those films was co-produced by at least one man.

SHORT OF EJECTING ONE-THIRD of male voters from the Academy (which won’t do much to correct gender bias anyway, given that women voters won’t necessarily vote for female nominees—nor should they), the only viable option for elevating female directors, writers, producers, et al, is to gender-segregate all individual-achievement awards: acting, costume design, cinematography—all of them. Best Director, Male; Best Director, Female; and so on.

“Women in film don’t need charity,” wrote Dina Gachman for Forbes earlier this year. “Yes, the numbers suck. It just doesn’t seem like charity is what women in film need. How about celebrating the good things, like the Sundance statistics this year?” Yes, let’s. The only conceivable opposition to a gender-segregated Oscars is “there aren’t enough lady-directors.” But that’s simply untrue. In 2013, half of the narrative films at Sundance were directed by women.

Some might ask, will segregating award shows actually do anything to combat gender bias in Hollywood? The answer is yes. For example, women-only awards for acting (Best Actress in a Leading Role, etc.) force Hollywood, and by extension American audiences, to sit up and take notice of undeniable female talent. Why can’t the same be said for directing? Or screenwriting? Or cinematography? Yes, they’re vastly different in function, but ultimately, they’re all modes of artistic expression. Evidently the problem isn’t an existence of female talent behind-the-scenes, but rather exposure thereof. When you create more opportunities for women in Hollywood to earn recognition, you forge a marketable demand. And in an industry dominated by one of the world’s most powerful boys’ clubs, forcibly creating a space for women (i.e., gender-segregating award shows) might be the only option.

Example: Octavia Spencer, who up until 2011 enjoyed only small roles on television and in decidedly B-list movies. Then she was nominated for her supporting role in The Help, and now, two years later, she’s slated to star in NBC’s primetime reboot of Murder, She Wrote. Nora Ephron was nominated for writing Silkwood in 1983. Who’s to say whether When Harry Met Sally… or Sleepless in Seattle or You’ve Got Mail would have been greenlit without that initial recognition? Despite the endless bandwidth devoted to insisting otherwise, big-time awards like the Oscars are meaningful. They can skyrocket the careers of talented actresses, and if Ephron is any example, the equation applies to the minds behind the movies as well.

But why kowtow to Hollywood conventions? Why utilize an antiquated and sometimes exclusionary and demeaning institution to disrupt gender bias?

THE MOST EFFECTIVE WAY to change a large, complex establishment is from the inside out. Yes, a number of powerful Hollywood executives are “sexist bozos,” as Dina Gachman called them, but they speak another language beside boardroom misogyny.

The American higher education system underwent a similar kind of inside-out change. The co-education of major universities in the 1960s and ‘70s forcibly created a space for female students. Today, the (slim) majority of degree recipients are women—reflecting the (slim) popular majority of women over men in the U.S. today. Female college and university presidents, although still woefully underrepresented, have been growing in number at a steady pace for decades. According to a report from the American Council on Higher Education, from 2006 to 2011 alone, the number of female college presidents rose 3.4 percent. They formed only 9.5 percent of college presidents in 1986, but increased in number by 16.9 percent by 2011. That rate shows no signs of plateauing—elite colleges and universities are now actively seeking female leadership. Like Hollywood, academia is an incredibly powerful American establishment. And like Hollywood, it’s not a consolidated industry that can be changed by external factors. The most effective disrupters attack from within.

That’s not to say there aren’t economic reasons to increase female presence in commercial cinema. The studios behind Oscar-nominated films see an average margin of increase of 247.2 percent between production budgets and ultimate box-office revenues. In short, gender-segregated awards would require more categories. More categories entail more nominations. The more nominations in a given year, the more likely a given film will receive that fat 250 percent profit. Will more nominations simply dilute the amount of funds each nominated film receives? Possibly. But inarguably, a nomination increases viewership, which increases box-office profit.

Rob Hunter of Film School Rejects writes: “Per the studios’ profit agenda very few big budget films are handed to inexperienced directors as they instead chose names with a proven track record or at least a temporarily high profile.” What constitutes proven track record and high profile? Largely box-office sales, but also awards like an Oscar or a Golden Globe.

Widening the playing field would bring smaller (yet equally as artful) female-helmed projects under consideration. Sarah Polley, for example, who wrote and directed Take This Waltz, could have made an apt addition to the 2012 nominations for Best Director. A mere nomination might open up a number of doors for Polley, who is just as talented a filmmaker as male industry-favorites like Wes Anderson and Noah Baumbach. The Academy is still open to an element of low-budget filmmaking that studio executives are not—that’s how films like Beasts of the Southern Wild do so well. Oscar categories for female directors and writers are a way of shoehorning talented women into the seemingly impenetrable and endlessly cyclical boys’ club.

Here’s another fun fact courtesy of NYFA: Women purchase half of the movie tickets sold in America. Who’s better equipped to write, direct, and produce movies that will appeal to that demographic? Michael Bay? Hollywood may not be gender-blind, but never is it blind to dollar signs. When more women are nominated, everybody wins.