Climate change madness: The fate of the planet now depends on Kickstarter

Earth continues to heat up, while governments sit idly by. Some see a savior in crowdfunding — but will it work? 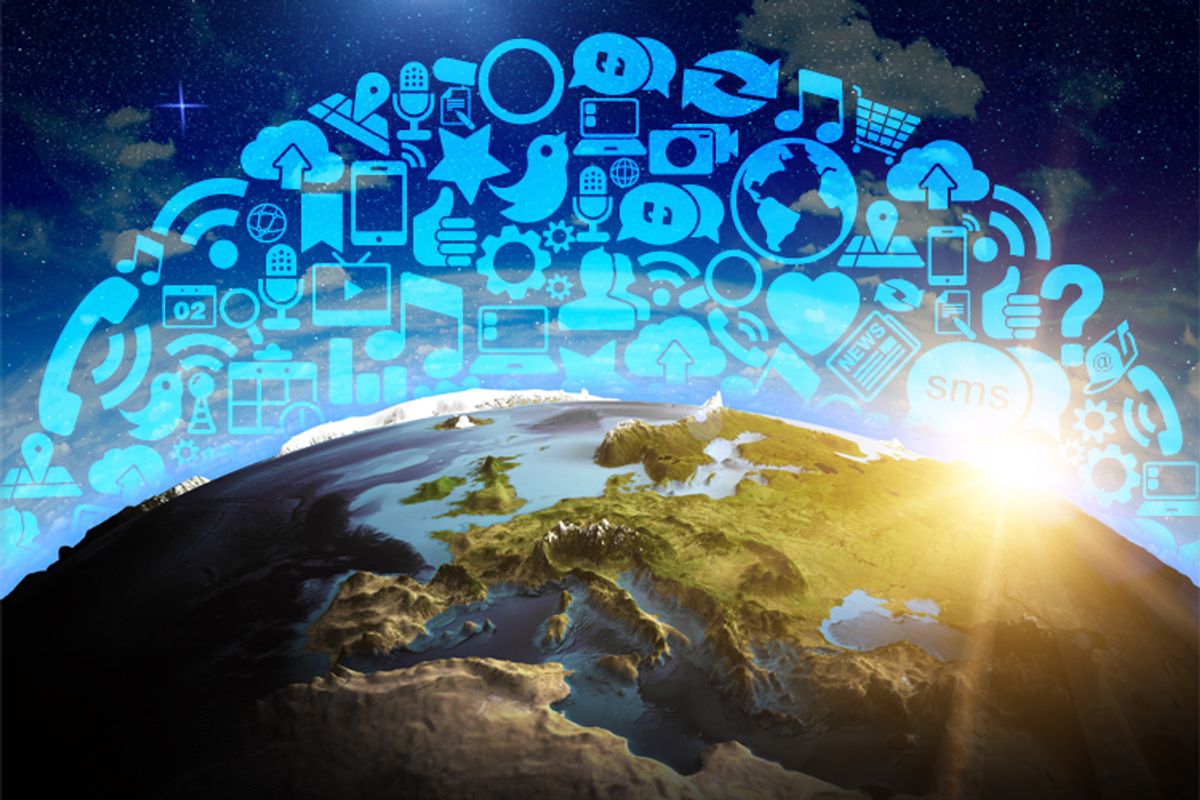 Every footnote tells a story. But a nugget in the minutes of the International Geophysical Year (IGY) Working Group on Oceanography, dated March 2, 1956, marks the beginning of a particularly important tale.

In the IGY meeting, two U.S. scientists, Roger Revelle and Hans Suess, pushed for government funding to measure the amount of carbon dioxide in the earth's ocean and atmosphere. Their goal: "a clearer understanding of the probable climatic effects of the predicted great industrial production of carbon-dioxide over the next 50 years."

That's right: Way back in the 1950s scientists were already focused on gathering data that would help them test the theory that human-caused production of CO2 was likely to cause climate change.

Revelle and Seuss were successful in their recommendation. The upshot of the meeting: A young post-doctoral student at CalTech, Charles Keeling, received enough funds to further his passion for measuring CO2. Keeling, according to the New York Times, was "the first person in the world to develop an accurate technique for measuring carbon dioxide in the air."

Remarkably, within just two years, Keeling was able to document that CO2 levels were rising. Even more astonishingly, Keeling (and later, his son Ralph) was able to keep his project going for the next 60 years, cobbling together funds from a hodgepodge of federal, state and private institutions. The result of his painstaking work: the infamous "Keeling Curve" -- hard data proving that there has been a startling, but steady, rise in atmospheric CO2 levels in the second half of the 21st century, from 310 parts per million in 1956 to nearly 400 parts per million today.

Maintaining the funding stream for Keeling's research has always been a challenge. But in recent years, the struggle has reached a crisis point. Sharp cutbacks in National Science Funding dating back at least three years have endangered the continuity of the data-gathering process. Just before Christmas, Ralph Keeling was forced to go the crowdfunding route, hoping that the power of distributed fundraising power would keep the data flowing.

And why not? Surely, confronting a global challenge like climate change calls for mobilizing the masses by any means necessary. If smartphones and social media networks are facilitating new fundraising avenues for artists and entrepreneurs and politicians, scientists would be fools to ignore them, right? In a winter of extraordinary weather extremes, both cold and hot, it's easy to argue that there has never been a better time to kick-start a campaign to save the planet.

But some commentators have expressed qualms that the turn to crowdfunding could represent a dangerous retreat from governmental responsibilities to tackle the big problems. In the Guardian, for example, Alice Bell wondered whether crowdfunding was an appropriate response to problems that affect the entire planet. The challenge of climate change raises, once again, the paradox of civic crowdfunding -- the possibility that only the "popular" projects get funded, while support for government to tackle the tough stuff withers away.

"Crowdfunding is too easily applied to dismiss a role for the state," wrote Bell, "or at least as an expression of giving up on the role of the state to do such sort of work."

In his Dec. 24 letter, Ralph Keeling made a compelling case for the critical importance of the Keeling Curve.

This past year, our group reported that CO2 topped 400 parts per million at Mauna Loa for the first time. We also reported a shockingly large and unexpected increase in the seasonal swings in CO2 between summer and winter at high latitudes in the Northern Hemisphere. The boreal forests are evidently behaving very differently than 50 years ago. Meanwhile, the oceans are acidifying, ice is melting, sea level is rising, the frequency of extreme storms seems to be increasing. Scientists from around the world are scrambling to figure out what is going on and what the future holds, as CO2 continues to rise. Others are working on ideas for adapting to these changes or mitigating their impacts on society. While we urgently need solutions to cope with these challenges, we also can’t afford to take our eyes off the planet.

The value of these measurements is not questioned, but federal funding for these programs has never been so tenuous.

Actually, the "value of these measurements" has been questioned. Dating at least as far back as the election of Ronald Reagan, the funding for climate research has been a political football, and never so much as in the current era, in which House Republicans have specifically targeted cuts at the government agencies that have provided the bulk of Keeling's funding, including the National Science Foundation, the Department of Energy and the National Oceanic and Atmospheric Administration. The conservative strategy on the research appears to be that if it becomes impossible to measure something, we can pretend it doesn't exist.

As Keeling puts it: "I have observed a politically motivated suppression of science at almost all levels of government continuously brought forward by politicians (primarily conservative) pandering to wealthy and powerful fossil fuel interests. If such pandering continues to gum up the political system, there can be little hope that an adequate monitoring or response to a growing greenhouse gas crisis will be put into force."

Keeling has acknowledged in interviews that crowdfunding efforts are unlikely to fully make up for funding cuts, but he still holds out hope that media and popular attention to the effort could bolster institutional support. And intriguingly, one of the comments in response to Keeling's letter pointed to a promising climate change-related crowdfunding experiment in Australia.

Following the recent change in government in Australia, the new conservative prime minister, Tony Abbot, abolished the federal government's "Climate Commission," citing the need to save money. In response, the deposed head of the commission, Tim Flannery, organized a crowdfunding campaign that swiftly raised an impressive 1 million Australian dollars -- or a little less than $900,000 in U.S. currency -- to help fund a new, nongovernment-affiliated "Climate Council." Some 20,000 Australians contributed an average of $50 a person.

"Australians have demanded to know what is happening to the planet," said Amanda McKenzie, the council's new chief executive.

As temperatures in some regions of Australia shoot upward of 120 degrees Fahrenheit, the motivation of the donors is understandable. But even some people who accept the validity of anthropogenic climate change have expressed reservations. One local commentator, Chad Parkhill, noted that the crowdfunding campaign effectively let the government off the hook. The new administration was positively delighted to pass the buck!

The new Environment Minister, Greg Hunt, even went so far as to wish the Climate Council good luck on last Tuesday’s Lateline: “That’s the great thing about democracy: it’s a free country, and it proves our point that the Commission didn’t have to be a taxpayer-funded body. There is perfect freedom for people to continue to do this.”

... More to the point, crowdfunding also shores up the tired old neoconservative narrative about invisible hands and the wisdom of the market.... Crowdfunding promises that no potential market, no matter how small or niche, will remain unserved; that if only 500 people around the globe want vegan leather boat shoes, those 500 people can fund someone to make them. The market that crowdfunding promises to deliver is one where nearly any desire can be fulfilled if you find enough people who have enough money to make it a reality — and, thanks to the invisible hand, that the world will be a better place once those desires are fulfilled.

This is all well and good for certain kinds of goods and services: cultural products, for example, suit the crowdfunding model well, because the world is a better place when a new literary journal is able to be founded, or an artist gets enough money to cover the cost of materials for their next work. The problem is that not everything fits neatly into a consumption model, and information about climate change is a prime example...

“Crowdfund it!” seems to have become the default solution to the problems posed when a neoliberal government cuts a necessary service.

Or, as Alice Bell wrote, "crowdfunding may well offer something new to small projects, especially those which go against the grain of what is scientifically fashionable or politically useful." But is it the right answer for "long-term, large-scale" projects?

In some respects, the question is moot. In the current climate of constrained government budgets and rabid political opposition to funding the most basic data-gathering efforts, no scientist can be blamed for turning to crowdfunding to raise cash. It doesn't matter whether one trusts the invisible hand of self-interested actors to solve the pressing problems of our day. When our institutions are broken, we are forced, willy nilly, to fall back to whatever possible solution presents itself.

But it's definitely worth asking the question of whether a helter-skelter crowdfunding approach is superior to the government-led mobilization of resources to tackle major social challenges. The wisdom of the market, after all, helped get the world into the climate mess it currently faces in the first place. It's not at all clear that it will get us out of our jam without some organized help.

And what's most distressing is that back in 1956, the ability of scientists to look ahead, target potential problems and mobilize government funding to tackle them was far more effective than it is in 2014. Smartphone penetration doesn't necessarily equal progress.