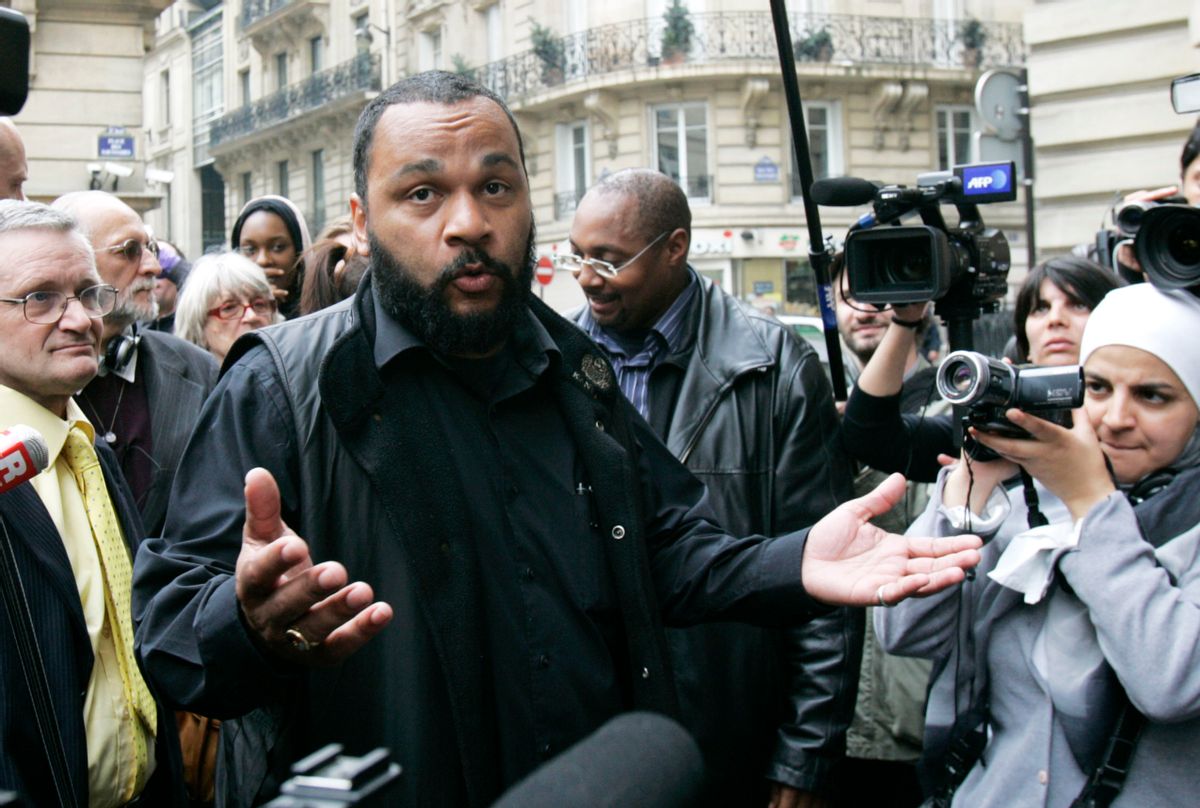 PARIS, France — Seated on a darkened stage, comedian Dieudonne M'bala M'bala turns his attention to a Jewish journalist who criticized his shows.

"When I hear talk of Patrick Cohen, I say to myself, you know, the gas chambers..."

"A pity," he concludes as laugher echoes around the theater.

M'bala M'bala's Holocaust "humor" has forced its way to the top of the French political agenda as government efforts to ban his performances are triggering an impassioned debate about the limits of free speech.

The comedian’s popularity, particularly among disaffected big-city youth, is provoking wider concerns about anti-Semitism in some parts of French society.

Those worries led President Francois Hollande Tuesday to demand the authorities be "vigilant and inflexible" when "confronted by all attacks on the principles of the Republic, by racism, by anti-Semitism, by threats to public order provoked by outrageous provocation."

The man at the center of the controversy is mixed-race: his mother is white, his father black, originally from Cameroon. When he first emerged in 1990s, the comic — who uses only Dieudonne (French for “God given”) as his stage name — became a firm favorite among the French left thanks to his anti-establishment jokes and political engagement against the far-right National Front Party.

Early on, he starred in a double act with a Jewish partner, Elie Semoun. But matters changed at the turn of the millennium, when the comedian began to pepper his stage shows and TV appearances with anti-Semitic material.

Convicted seven times for defamation and race hate, M'bala M'bala saw his career seem to fade. But although he was shunned by established media, he nurtured a strong youth following via the internet and the Main d'Or Theater he runs in Paris.

He returned to the headlines last month, when his stage attack on Cohen was broadcast on TV, prompting government measures to ban a planned tour of provincial theaters.

San Antonio Spurs French basketball star Tony Parker was dragged into the mess when a 3-year-old photo surfaced of him making a similar gesture alongside M'bala M'bala. Parker has apologized and said he was unaware of any political connotations.

The gesture involves one arm held out at an angle while the other reaches across the body to touch the opposite shoulder. Known as the "quenelle" — the French word for a type of elongated dumpling — it's a M'bala M’bala trademark.

Followers have become fond of posting pictures of themselves performing it at sensitive Jewish sites including the Auschwitz death camp, Anne Frank's house and the school in the southern French city of Toulouse where an Islamist extremist killed three children and a rabbi in 2012.

M'bala M'bala has denied the gesture is Nazi-related, saying it only conveys a message of defiance to the establishment.

He also insists he’s anti-Zionist rather than anti-Semitic. He has, however, invited Holocaust deniers as guests at shows packed with jokes targeting Jews and mocking the Holocaust.

In an interview posted on YouTube, he claims that "the big crooks of the planet are all Jews."

One video sketch has M'bala M'bala dressed as a US soldier liberating a concentration camp. While a narrator backed by a jaunty ragtime tune tells how the Nazis made leather goods from human skin, M'bala M'bala's character rests in an armchair until a sidekick dressed in a striped concentration camp uniform rushes up crying "look out, you're sitting on grandma."

His theme song, which has fans dancing in the aisles at the end of shows, uses the refrain "Shoananas" — blending the Hebrew word for the Holocaust and the French for pineapple.

Questioned in interviews about how such material can follow his claim not to be anti-Semitic, M'bala M'bala retorts that he should be free to make fun of Jews because others mock blacks and Muslims.

Although he’s been met with outrage and condemnation, M'bala M'bala has built a wide support base that has Jewish groups worried about an undercurrent of anti-Semitism among marginalized young French.

The comedian's message strikes a cord both with youths of Arab immigrant extraction who transpose Middle-Eastern Muslim-Jew divisions to the streets of Paris, and poor whites from the far-right fringe. M'bala M'bala's Facebook pages has almost half a million likes.

That’s in a country with the European Union's largest Jewish community. A report last year by the EU's Fundamental Rights Agency found 70 percent of them worry about falling victim to "verbal insult, harassment or physical attack” — the highest level in eight countries surveyed.

M'bala M'bala has received support from Iran and has become close to the National Front's founder Jean-Marie Le Pen, who is godfather to one of the comic's children.

That link and the enthusiasm young National Front supporters show for M'bala M'bala presents a dilemma for the party’s current leader, Le Pen's daughter Marine, who is seeking to gain political respectability by moving away from the party's anti-Semitic past. Marine Le Pen has expressed shock at the comic's outbursts but opposes the ban sought by the Socialist government.

Even on the left, there's concern a ban on M'bala M'bala would erode free speech.

Although a number of cities have imposed government-approved bans on Dieudonne shows planned for the coming days, a court in the city of Nantes has overturned a ban there. Dieudonne, who plans to open a new tour there, responded on his Facebook page by posting "We've won!"

Interior Minister Manuel Valls said he would appeal the decision.