"Amazons," a wacky, pseudonymous hockey novel, has fallen by the wayside -- partly by the author's design 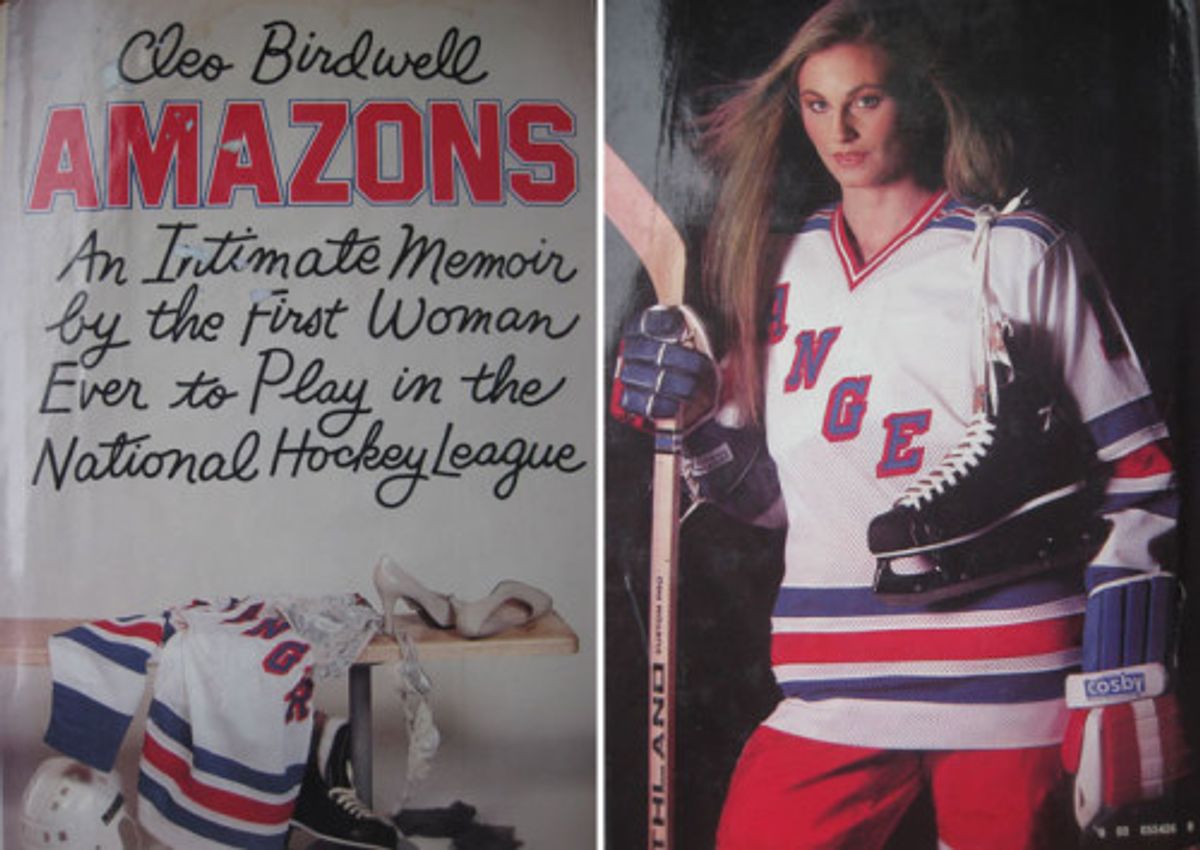 Holt, Reinhart, and Winston published Amazons: An Intimate Memoir by the First Woman Ever to Play in the National Hockey League in the fall of 1980. “I played with them, I fought with them, I shared their locker rooms,” Cleo Birdwell, the memoir’s author explains, “I drove them half-mad with sweaty, aching, voice-changing, male lust.

“After a while, they began to accept me. What could they do, take me to the walls of the city and stone me?”

No woman has been on the roster of a professional hockey team, yet the memoir’s back cover has an author photograph of Birdwell, an attractive blonde with a come-hither expression in full New York Rangers hockey regalia. Her long hair and a slung-over-the shoulder black skate cover parts of her uniform, so that the word Rangers appears as the French word for Angel.

In over-the-top comically implausible prose, Birdwell, a twenty-three-year-old from Badger, Ohio, narrates her inaugural season with the New York Rangers. She has a Midwestern practicality and straight-forwardness, a sly humor, and an unusually subversive sexual candor and agency, chronicling—sans any standard female shame or hesitancy—her plentiful sexual liaisons with a gamut of neurotic men.

The dialogue is masterful and playful and the humor unremitting. Yet beneath Birdwell’s narration, a foreboding lurks—a tinge of sadness and an existential-like searching-ness.

That’s because Cleo Birdwell is a pseudonym for Don Delillo. Amazons was Delillo’s seventh novel, and it sold better than his previous books and doubled his income, all before he earned his reputation as one of America’s greatest writers.

Whether from embarrassment, personal reasons, a game he’s playing with his readers, or other reasons I can’t fathom, Delillo doesn’t want his name attached to the book and has never officially acknowledged writing it. He asked Viking to expunge the book from White Noise’s bibliography and won’t grant permission for the novel’s reprinting.

I came upon Amazons because of my women-centered sports novel The Peerless Four. In all the so-called classic sports novels by men, I claimed in an interview, none have female athletes as subjects.

Delillo’s former editor contacted the interviewer, who informed me of my mistake.

In all the so-called classic sports novels by men, none have female athletes as subjects.  Except for Delillo’s fantastical Amazons, and in a strangely fitting twist, its author has divorced himself from it, and the novel remains out of print.

Amazons is laugh-out-loud funny and worth reading, and not just for Delillo fans. Both David Foster Wallace and Jonathan Lethem admired it. In an interview, Lethem acknowledged Amazons’ influence on Motherless Brooklyn (specifically a character inAmazons burdened with Jumping Frenchman’s Disease, causing him to involuntarily perform deep knee bends and bottom of the shoe examinations).

Along with sports and sex, Amazons revels in America’s phallic-centeredness. “The penis erect,” Birdwell explains, “can be impressive. It has the force of legend and myth. An engorged, murky thing. It loses its playfulness, erect. There is sometimes a purpling along the seams. It is a little beastly if the truth be known.”

Birdwell’s fellow hockey mate Eric “was a good-natured guy who stood about six-six in skates and had a penis so humongous it was given a separate identity by the other players. Eric was Torkelson; his penis was Torkle.

“A player would say, ‘How’s Torkle doing today?’ Or, “Who’s playing Torkle in the movie version?’ Or, ‘Is it true Torkle’s being asked to endorse Jimmy Carter?’ Or, ‘There’s a story the airlines aren’t counting Torkle as carry-on anymore. You’ll have to buy an extra seat for him.’”

Of Birdwell’s childhood friend and sexual compatriot Georgie, she says that he was “‘one of those boys who’s totally, everlastingly in love with his own penis. He never got over his first erection. He just loved flaunting himself. He was always playing with it. When he wasn’t playing with it, he was looking at it. Looking isn’t the word. He would study it. We’d be in the back room of his house when his parents were out and he’d be sitting there with his pants open and with the most absorbed, studious, dumb-kid look on his face, examining himself—wondering about it, marveling at it, softly blowing on it, dusting it. His penis was a never-ending discovery, I guess.’”

Birdwell is an object of desire; but with each of the men she chooses, she seduces and observes what makes them tick sexually, and ultimately her desire to know what turns them on and how to accomplish this task takes precedence. The hockey inAmazons is not as important as Birdwell’s serial fornications. There’s the Rangers’ general manager Sanders Mead (“If a man’s name sounds right whether you say it forward or backwards, it means he went to Yale,” goes the opening line), who is rendered flaccid by the word “Watergate.” Then there’s head coach Jeep Larousse, who can only get turned on by speaking French in long monologues. Archie Brewster is a world-traveling tennis professional, and he also engages in strip-Monopoly sessions (“better than incest”) with agent Floss Penrose. Shaver Stevens is the closest Birdwell comes to having a boyfriend. He’s afflicted with Jumping Frenchman’s Disease, requiring a five-month coma-like slumber in a “Kramer Cube,” which renders him, in a controlled stasis, quite attractive to women. There’s also Murray Jay Siskind, later to appear in White Noise, a New York sportswriter who carries his 800-page tome wherever he goes, an exposé of the Mob’s entrenchment within the snowmobile industry. Birdwell’s oral rendering of an idyllic traditional Christmas in her hometown causes Sidwell to climax multiple times.

The fact that Birdwell is a product of Delillo’s imagination doesn’t lessen the subversive hilarity of this penis-sex-sports-obsessed memoir. In fact, it complicates it.

Delillo’s original intent had been to publish Amazons with Knopf under his own name, but Knopf declined, freeing Delillo to publish pseudonymously with another publisher, while allowing his contract to remain with Knopf. He collaborated with his former colleague Sue Buck, who provided background information about hockey and what it was like to grow up in Ohio.

Thus Cleo Birdwell was born, and the same model that had posed for the seductive author photograph also attended the American Bookseller’s Association in full Rangers regalia, signing galleys at a booth and creating a stir. Uncorrected galleys went out to reviewers with the disclaimer: “Unfortunately the author will not be able to tour because she will be leading the Rangers in their pursuit of the 1980-1981 Stanley Cup.”

An astute critic from Worcester, Massachusetts was the first to call out Delillo, simply on the basis of his style, and Christopher Lehmann-Haupt followed the assertion in his New York Times book review, effectively outing Delillo for good.

Delillo has succeeded in keeping the book out of the cultural mainstream. On Amazon.com, Amazons has four reviews, including one reviewer who recommends the memoir as a warning to “any ADULT female thinking she might make it in the NHL.”

In that case, among Birdwell’s instruction to potential female NHL players: “It is always interesting to grab a handful. There is a natural relationship between the penis and the hand. It fits the hand…Limp the penis is a dubious item compared to the human hand. It just hangs there, backed by the testicles, like a soloist with a rhythm section. Even the word is funny. It is a stupid, funny-looking, funny-sounding word.”