The actress's only crime is being excited about her career. Yet she's trashed in the press after every awards show 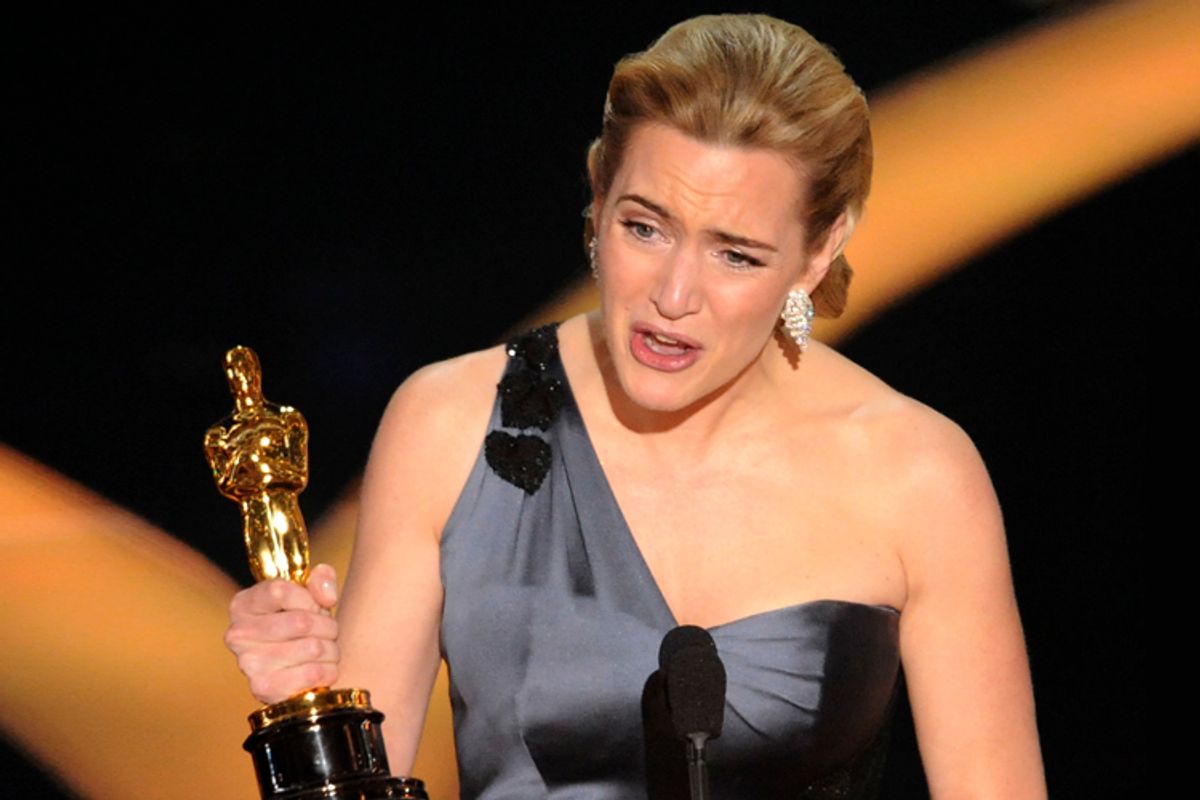 Kate Winslet has been nominated for a Golden Globe for her new movie “Labor Day,” and if she wins on Sunday (she almost certainly won’t, due to Cate Blanchett’s steamroller of a performance), it’ll be her fourth such trophy. And that’s exactly where her troubles in the media -- which have included slut-shaming and just plain old bullying -- started.

The actress had long been one of her generation’s standouts up until the night when she won two Golden Globes, in 2009. She’d been nominated for five Oscars for films as wide-ranging as “Titanic” and “Eternal Sunshine of the Spotless Mind” -- and, in the run-up to the dual release of her Holocaust melodrama “The Reader” and her fifties-housewife melodrama “Revolutionary Road,” she appeared on the cover of Vanity Fair with the pull-quote “Do I want an Oscar? You bet your f---ing ass I do!” She was well on her way when she won Golden Globes for both roles. Everything was coming up Winslet!

Ambition is a common trait in both senses of the word -- it’s in all of us, and it’s seen as low-class to express, for some reason. Winslet was so carried away that, in listing her fellow nominees in her second acceptance speech, she named Angelina Jolie as “the other one” -- don’t worry, the press noticed. And, especially in England, her exuberance was seen as deeply embarrassing.

After a season in which her awards-show speeches were picked apart and dissected according to just how effusive she’d been (effusiveness, here, was bad), came her Oscar acceptance speech, during which she described holding a shampoo bottle as a child and pretending it was an Academy Award. It was to some eyes entirely endearing, and to others subpar. Very few stars, particularly female stars, please everyone with awards-show speeches, but Winslet was criticized in the tabloid press for not paying enough fealty to Harvey Weinstein and being “annoying” -- this a year after her speech.

Her major offense, here, had been to accept an award in a manner conveying gratitude, emotion and extreme surprise. This isn’t unique to Winslet: Taylor Swift can testify to just how a woman is mocked when she shows surprise at music awards shows (and, conversely, Anne Hathaway’s smoothness in picking up her Oscar was just another piece of ammunition for her haters). But it kept on going -- Winslet’s success as an actress, winning an Emmy and a Golden Globe for her performance in “Mildred Pierce,” only begat criticism. Once again, the press deemed her deeply irritating for her excitement: “it seems that history has repeated itself for Kate Winslet who struggled to curb her enthusiasm last night to give the most over the top speech of the evening,” said the Daily Mail. The thing is, she had hardly been a sure thing given that “Mildred Pierce,” a challenging labor of love, was competing against the far more popular “Downton Abbey” (and Winslet against one of its stars). Why shouldn’t she have been excited?

What’s most frustrating about Kate Winslet’s status as an easy punchline when it comes to awards avarice is twofold: “The Reader's” artistic merit can be debated, but otherwise, Winslet’s awards and nominations have come not from films seemingly designed to appeal to awards voters but for challenging, risky work. Winslet pushed “Titanic” away from commerce and toward art; she got Oscar nominations for a sci-fi-tinged surrealist romantic comedy and for surprisingly sharp suburban satire; she chose to appear in a lengthy and very faithful adaptation of a little-read hard-boiled noir novel. Why shouldn’t she be proud of that?

Furthermore, Winslet’s come in for criticism on other fronts to such a degree that it seems to be rolled into one undeserved and nasty public image. She’s been upfront about her weight, deriding the pressure to lose baby weight quickly; she’s also been upfront about the fact that her three children, one a newborn, were the products of three different relationships. That fact has made her the object of scorn, particularly in Britain, where a columnist wrote: “Three children by three different fathers doesn’t look good on anyone. To paraphrase Lady Bracknell: to have children by two men may be regarded as a misfortune, to have children by three looks like carelessness.”

Somewhere along the line -- likely during her successful Oscar race -- Kate Winslet became something more than what she’d always been, a reliably great actress. She became a screen onto which the celebrity press could project ideas of what a gracious acceptance speech might be, what it means to want success too badly, what a woman ought to do with her body and in her personal relationships.

Though practically no one but critics and awards voters have yet seen “Labor Day,” its existence and a reading of the Joyce Maynard novel on which it’s based proves, at least, that Winslet won’t stop making movies with spiky, strange themes, haters be damned. (And her taking a rather obvious paycheck role in the young-adult franchise “Divergent” proves that she definitely doesn’t care what you think.) Whether “Labor Day” is good or not is somewhat beyond Winslet’s control, anyway -- what matters is that it exists as yet another testament to Winslet’s ambition, a trait women especially are supposed to hide. The most refreshing thing she could do would be to show up at the Golden Globes, to show off both her actual post-baby body and her desire to be recognized for the quality of her work.