Penis politics: Sex, size and stereotypes in the gay community

When it comes to penis size, gay men face a host of preconceptions about masculinity and race 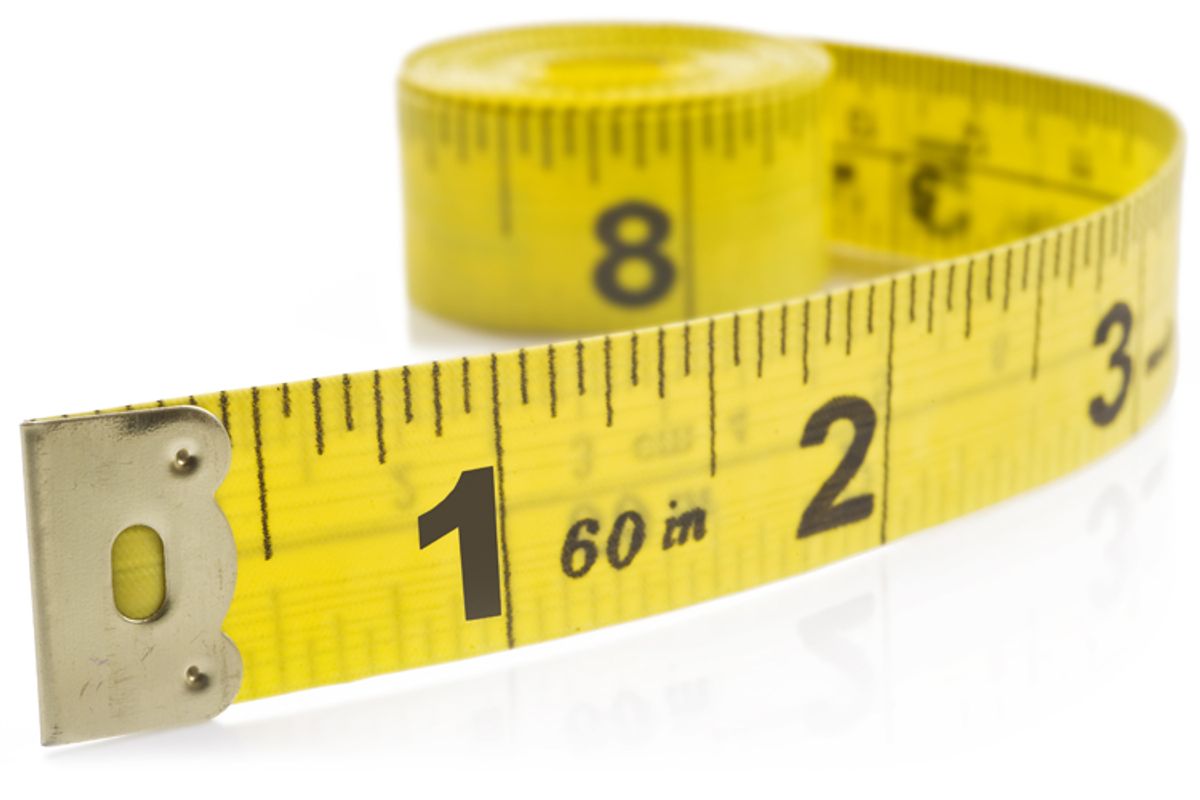 Recent studies have shown that actual penis size is smaller than men are claiming. According to the Journal of Sexual Medicine, the average male penis measures 5.6 inches when erect; the Journal of Urology puts it at a slightly smaller 5.08 inches. This is considerably smaller than previous numbers from Alfred Kinsey, Durex and the Definitive Penis study, which averaged 6.25 inches in their estimates. The difference between the two estimates: surveys like Durex's rely on self-reporting, and men are likely to overestimate. As Tom Hickman wrote in "God’s Doodle": “What is incontrovertible is that where men and their penises are concerned there are lies, damned lies, and self measurements.”

Just ask any gay man looking for a hook-up on Grindr. “If a guy tells you his size and you meet up, you realize he must have a different ruler,” said Noah Michelson, editor of The Huffington Post’s Gay Voices section. Michelson believes that the reason men are likely to overreport their penis size is because of the “cultural currency” the gay community places on having a large penis. “I think there’s something to do with internalized homophobia or insecurities about being a man,” Michelson said. “You want to have a big dick and you want to be with a big dick. You want to be with a ‘man.’”

According to Jaime Woo, author of the book “Meet Grindr,” which explores how men interact on mobile hookup applications, that game can have very negative consequences for queer men who find themselves on the losing side. That's why the size issue can seem even more fraught in the gay community than among heterosexuals. “In gay male culture, your sexual worth is very tied to your worth in the community overall,” Woo said. “We don’t have a lot of structure in place for men who aren’t sexually valuable, and they disappear into the background. Gay men have enough issues already, and this is just another way for them to feel bad about themselves, if they’re not packing eight inches under their pants.”

Woo told me that looking for sex on Grindr “makes the expectations much more heightened.” “Grindr has really distorted peoples’ understanding of what average or normal is, and the fact that people can ask if six or seven inches are too small -- it’s jaw dropping,” Woo said. “You can be very picky because there is something better around the corner, someone bigger or hotter and someone more your type. It creates a very narrow band of desire."

Huffington Post writer Zach Stafford argued that in order to hook up, we’re commodifying ourselves for sexual consumption. “On Grindr, you’re literally putting someone in a box,” Stafford explained. “The app’s layout is an actual shelf, like you would see in a grocery store.” In order to participate on the site, Stafford said that you have to learn how to market yourself by those confines. “It’s like being a book on Amazon,” Stafford told me. “You give yourself a little cover and write your summary. You make yourself a product, and when you’re selling yourself, you always go bigger.”

Stafford said our fascination with penis size is inherently tied to capitalism. “Studies have shown that people with larger penises make more money,” Stafford explained. “It’s power in our pants.” Stafford also explained that the correlation between sex and power leads to a skewed power dynamic between tops and bottoms. Research shows that bottoms have smaller penises on average, and are more likely to have penis anxiety and low self-esteem.  In an essay for the Huffington Post, Stafford called it “Top Privilege.” Stafford wrote, “In this line of thought, bottoms are seen ‘less than,’ ‘feminine’ or ‘the woman’ because they are the taker of the phallus.”

But it’s not just an issue of money and gender. Race also plays a large part in how gay men read each others’ bodies, especially for black and Asian men, stereotyped at the ends of the size spectrum. Stafford, who is multiracial, said that men will often approach him in bars to ask about his penis, expecting him to conform to the stereotype. “It creates an enormous amount of pressure for black men,” Stafford stated. “Black men are only seen as a tool -- a tool of building and a tool of fucking. They’re reduced to a big penis.” In his case, Stafford said men often fall into two camps: “Either white people look at me as a black man with a big dick, or they see me and fetishize me -- they want to dominate me.”

Due to his ethnicity, Thought Catalog writer John Tao has also found himself being put in a box in the bedroom. "Because I’m Asian, I’m automatically categorized as being a bottom,” Tao said. “There’s a perception that I wouldn’t want to top.” Because of this, Tao said that’s the role he’s most often performed in sexual relationships. “All of these people think I’m a bottom, so I’ll just be a bottom,” Mr. Tao explained, “You have to be careful because we internalize these stereotypes about ourselves. Your gay Asian friend might identify as a total bottom, but that could be years of societal expectations.”

Justin Huang, who blogs about his experiences being gay and Chinese at I Am Yellow Peril, agreed that the baggage around penis size can be particularly harmful for Asian-American men. In school, Huang’s friends would often tease him about what they assumed was the size of his penis, which was difficult when coming to terms with his sexual identity. “For a long time, I thought I had a small penis,” Huang explained. “It’s amazing what your brain can train you to see. I didn’t have a lot of respect for my penis. Gay men are emasculated already, so when you’re gay and Asian, you feel doubly emasculated.”

Huang told me that when you’re Asian, you’re expected to perform the stereotype, meaning that guys are very curious to see what’s inside your pants. “I’ve been in straight bars using the bathroom where a guy will lean over and look at my dick, just to see if what they say is true,” Huang said. But Jaime Woo argued that the same isn’t true for white men, whose penis size isn’t policed in the same way. “White men are considered the sexual default, so you’re allowed to have some variability,” Woo said. “White men get to be anything and everything, and there’s no presumption there. So for white men, a big dick is a bonus.”

Huang also argued that these stereotypes are a symptom of our lack of sex education and lack of knowledge about our bodies. “We’re told to hide our penises,” Huang said. “It’s a form of sexual oppression we don’t talk about. You see boobs everywhere. You don’t see penises anywhere, not even HBO. It’s something that’s scandalous and cloaked.” Because of the shame surrounding invisibility, men often place too much emphasis on something so small. “When I think about the guys I’ve been with, I don’t remember the penises,” Huang said. “I remember the boy. A penis doesn’t smile. A penis doesn’t look into your eyes. A penis can’t wrap its arms around you.”