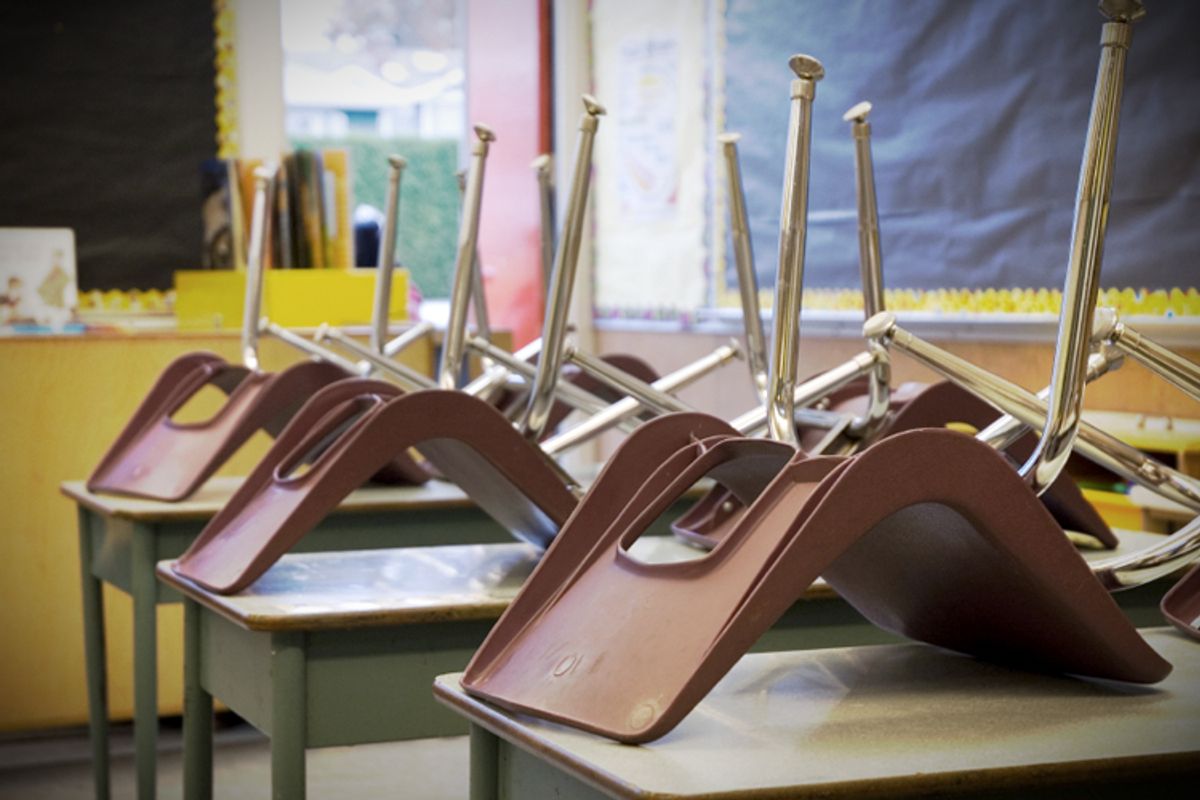 This piece originally appeared on EduShyster.com.

When I joined Teach For America in the spring of 2011 I had no idea that my belief in social and economic justice was about to be cynically exploited by the corporate class.  As a former development manager for a nonprofit that serves low-income Chicago public school students, TFA’s claims that its  corps members and alumni are helping lead an educational revolution in low-income communities across the country spoke to me. Naively seduced by TFA’s do-gooder marketing pitch, I charged ahead on a mission to close the academic “ achievement gap” that TFA blames on incompetent (read unionized) teachers.

Today, having completed the two-year program and seeing how it operates from the inside, I’m convinced that TFA now serves as a critical component of the all-out-effort by corporate elites to privatize one of the last remaining public institutions of our country: our public schools.

Adored By the Corporate Class

TFA and the privately managed, non-union charter schools that its corps members often staff are adored by the corporate class. Elites shower both TFA and charter schools with private contributions from their own tax-exempt foundations, as well as taxpayer dollars funneled by their courtiers in Washington and statehouses across the country. Goldman Sachs, Wells Fargo, The Walton Foundation (Walmart), The Bill and Melinda Gates Foundation, The Eli Broad Foundation, and a small army of billionaire hedge fund managers are just a few representatives of the corporate class that bankrolls TFA and the various networks of privately managed (but taxpayer funded) charter schools. Wendy Kopp, founder of TFA is even married to the president of KIPP, one of the country’s largest networks of charter schools.

In Chicago, where I participated in TFA, the organization maintains its own extremely close partnerships with privately managed charter schools. Their relationships are so close, in fact, that earlier this year, after the Chicago Public School system closed forty-nine traditional, unionized public schools, claiming the schools were “underutilized,” it was revealed that TFA was working behind the scenes with a number of privately-managed, non-union charter school operators to open fifty-two new charter schools in Chicago over the next five years.

The alliance between TFA and charter schools is cemented by an arrangement that few people know about outside of the organization. The teacher placement policy of TFA explicitly states in bold letters, “It is our policy that corps  members accept the first position offered to them.” The effective result of this policy means that corps members have no bargaining position to negotiate wages or benefits, meaning that whatever offer a school makes, the corps member must accept it. TFA provides a rather benign explanation for this arrangement, claiming that it allows for the quick and efficient placement of hundreds of corps members into teaching positions in each market. However, in practice, this mandate is a lynchpin of the corporate class’ privatization plan for education.

Each spring, local TFA offices in each market dedicate an entire team of staff to arranging interviews between corps members and hiring schools. The “first placement” policy means that TFA can guarantee charter schools a constant supply of new teachers each year who have no choice but to work for wages and benefits far below those negotiated by the local teachers union at traditional public schools in the same area. While a first year salary for a teacher at a traditional unionized school in Chicago is approximately $45,000, the starting salary at many of TFA’s partner charter schools is nearly 30 percent less at $32,000. And because teachers at charter schools are not protected by the due process policies the union has in place at traditional public schools, TFA corps members at charter schools can be fired at any time, for any reason.

A fellow TFA corps member in Chicago who worked at a charter school told me that she met with her principal each Friday to find out if she should bother coming back to work the following Monday. Another told me that his principal explicitly told him that she knew he would only be with her school for two years, so she was going to work him to death. And when he left after his TFA commitment, she would just replace him with a new TFA recruit. Churn and burn is the business model for these schools, and TFA provides a continuous supply of naively idealistic workers who have no choice but to accept their lot. Furthermore, this constant churn of teachers who possess zero or one year of experience can’t possibly be good for the academic or social-emotional development of students who often have little stability in their lives.

By driving down teacher salaries and weakening workplace protections, TFA has a corrosive effect on the teaching profession. But behind TFA’s role as a feeder system for charter schools is a hypocrisy that’s especially galling.

Corporate education reformers are constantly hailing “market-based solutions” as the remedy for poor academic performance among low-income students. TFA, charter schools and their corporate benefactors espouse the notion that if low-income students just had more choices in schools, the resulting competition would drive all schools to deliver a higher quality education. Students and parents must be free to vote with their feet and find alternatives; the Darwinian principal of survival of the fittest is what makes a “free market” so effective, claim its corporate proponents. And yet TFA’s rigging of the teacher hiring process in favor of charter school operators demonstrates a complete and utter contempt for local labor markets. When corps members aren’t allowed the freedom to turn down a job because the pay or benefits are inadequate, or because a charter school has a terrible reputation for abusing teachers, there is no “free market” at work.

Political philosopher Sheldon Wolin proposes in his book Democracy Incorporated that the United States has devolved into a unique, corporate-controlled state that he calls “Inverted Totalitarianism.” Considering the domineering corporate influence on TFA, I would suggest that TFA has become an inverted labor union. Traditional labor unions work to promote the interests of the working people who comprise them by collectively bargaining for higher wages, better benefits and improved working conditions. Through its partnerships with charter schools and its mandate that corps members take the first job they’re offered, TFA is lowering wages, reducing benefits and worsening the working conditions of teachers. It is increasingly clear that the mission of the corporate class is to destroy teachers unions and remake the teaching profession into a temporary, low paying job. The corporate class is getting all of the help it needs from Teach For America.

This week, recent alum Chad Sommer shared his critical thoughts on Teach For America’s approach to corps member hiring in the Chicago region. Because the piece touches on a number of important issues, we wanted to provide a few factual corrections and clarifications – along with our own reflections on some of the tough questions the piece brings to the fore.

Chad’s post focused on the financial implications of becoming a teacher – implications our corps members and alumni teachers confront when they first choose to join the corps and throughout their careers. As an organization, we are committed to doing as much as we can to ensure that teaching is a viable, financially sustainable option for an increasingly diverse, dedicated, effective teaching force. This reflects our belief that teachers who share the background of students have the potential for profound additional impact with those students.

In the Chicago region, 35% of our 2013 corps members received Pell Grants to make college possible and 25% were the first in their families to attend. Without a reasonable salary and benefits (along with support they receive from AmeriCorps for past, current and future education costs), we know that many of these individuals would be forced to direct their talents elsewhere.

With this in mind, we work with each accepted applicant to ensure that he or she knows what to expect in terms of salary, along with the process for securing a position once he or she chooses to join the corps. In Chicago, all teacher hiring happens at the principal level, which means that corps members must interview alongside all other candidates for open positions and are never guaranteed jobs.

Once hired, corps members are paid like any other school employee. Contrary to the information provided in the post, according to the latest data on the National Council on Teacher Quality website, the average starting salary for a CPS teacher in the 2010-11 school year was just under $50,000. In charters, the average salary for teachers with one to three years of experience is $45,000, as reported by the Illinois Charter Center. Generally, early childhood education teachers are paid less than their K-12 peers. Accordingly, when we first began partnering with community based organizations and Head Start centers in 2007, we established a benefits requirement and baseline salary of $33,764. Typically, our early childhood corps members make about $40,000.

Before accepted applicants confirm their spot in the corps, we ensure that they are both aware of and comfortable with this potential range and the baseline number. This is particularly important given that, as Chad correctly notes, we require corps members to accept the first employment offer they receive.

This policy – another important aspect of the corps experience communicated to each individual teacher before he or she makes the decision to join our work (both verbally and in writing) – reflects our commitment to being the best possible resource for local principals in high-need schools. Throughout the school year, our team partners with principals to understand their anticipated hiring needs for the year ahead – including expected openings for tough to staff subject areas like science and math. From there, we work to provide candidates with knowledge and experience aligned with these needs. As principals begin interviewing, we count on candidates willing to be flexible and teach where they’re needed – whether at a South Side charter or West Side traditional public school. In the last few years, a large percentage of our corps members were hired by local charter public schools – not by design, but because Chicago Public Schools hired very few teachers, given their financial challenges.

Every teacher who joins our movement commits to work in high-need, low-income public schools – settings in which attracting and retaining talent poses a major challenge. For individuals with very particular requirements aside from this, other paths to a career in education might ultimately be a better fit.

As we work to be the best partners we can be, we are committed to continually improving our hiring process to ensure that teachers feel valued, principals are empowered, and students have access to the diverse, talented teaching force they need. Along the way, we intend to ask the tough questions that will benefit educators and students for the long-term. How do we support our educators to meet a bar of absolute excellence while making teaching more sustainable, rewarding and celebrated? How do we ensure that our best educators have the motivations, continuous learning, and resources needed to stay in the classroom for the long-term? How do we continually challenge a historical approach to public education that leaves too many families without the educational opportunities they’ve been promised? These are the questions our kids, families and educators deserve.