The best moments of the Golden Globes 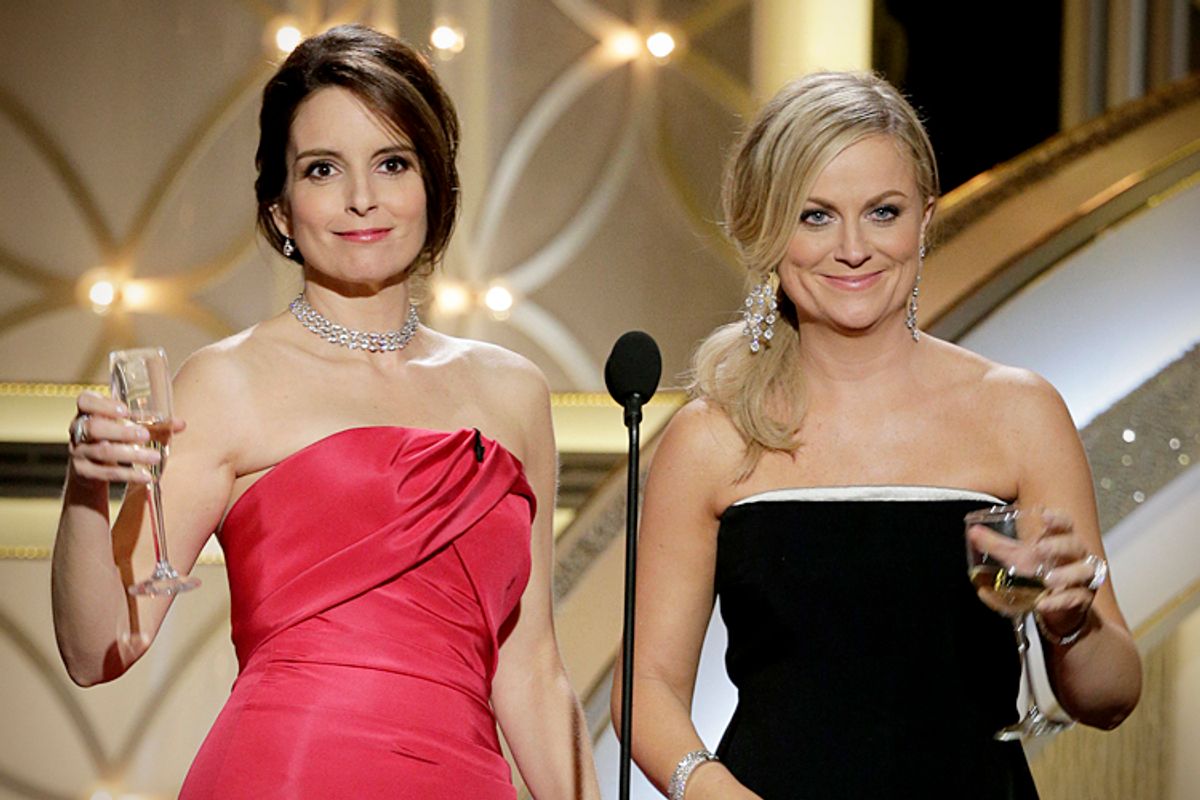 In the end, the hosts said, "This was the beautiful mess we hoped it would be," and they were right. From the deft tag-team hosting job of Fey and Poehler to Emma Thompson's bare feet to an appearance by the 80-year-old Philomena Lee, Sunday night was one of the most entertaining, emotional and, yes, messy Globes in ages. Praise be. Here are our favorite moments.

After killing it last year, the ladies had a lot to live up to. But as the hosts explained this time around, "This is Hollywood, so if something works, let's keep doing it till everybody hates it." And they then proceeded to vanquish, slyly telling nominee Matt Damon that in the star-studded crowd, "You're basically a garbage person," declaring Martin Scorsese had won the award for "Tiny man with the biggest glasses" and praising Matthew McConaughey for "Dallas Buyers Club" by noting, "He lost 45 pounds, or what actresses call 'being in a movie.'" There was also a bit with a perfect, e-cigarette smoking Julia Louis-Dreyfus. But the line of the night was their stinging observation about "Gravity" -- "the story of how George Clooney would rather float away into space and die then spend one more minute with a woman his own age." BOOM. Bonus points for their later introduction, "And now, like a supermodel's vagina, let's all give a warm welcome to Leonardo DiCaprio."

Winning a supporting nod for "Dancing on the Edge," a visibly moved – and decidedly rambly – Bisset took her sweet time wandering up to the stage, entered it from the wrong direction, got bleeped out during her speech and staunchly refused to acknowledge the "Get the hell off now" walkout music. "I'm absolutely shaking," she admitted. But give the woman whom the Globes deemed a promising newcomer nearly 50 years ago – and who's endured four previous losses since – her due. The legendary sex symbol gave the tip of the night: "To look good, forgive everybody. It's the best beauty secret."

How else could one be expected to endure a show that featured so many lengthy speeches and the longest, most excruciating walks to the stage in human history? Whether you were sitting next to Chris Martin at the awards or just popping open a beer at home, Diddy's suggestion that "Everybody just keep drinking; it'll be over soon" was perfection.

In an epic mass case of The Feels, Jennifer Lawrence admitted, "I don't know why I'm shaking." Jon Voight acknowledged, "I'm as nervous as everybody else." A tearful Amy Adams defiantly declared, "You cannot play me out of talking about my daughter" before thanking her for bringing her joy. Even Amy Poehler exuberantly confessed, after winning for "Parks and Recreation," "This is so cliché, but I get really nervous."

After Kyra Sedgwick and Kevin Bacon introduced their daughter as Miss Golden Globe, Tina Fey interrupted them to trot out her "adult son from a previous relationship" – a petulant Amy Poehler, sporting a hairstyle alarmingly similar to Robin Wright and Jennifer Lawrence's. Randy, sulkily telling his mom that "I hate you; Jacqueline Bisset hates you too," and hopefully inquiring whether Idris Elba or Harvey Weinstein could be his father, was the breakout newcomer of the evening. Give that kid his own show.

"This red? It’s my blood," the Oscar winner deadpanned as she flaunted her telltale Christian Louboutin soles. A barefoot Thompson then swigged a martini before letting "the voice of God" do the heavy lifting of listing the nominees. Perfection.

OK, maybe not a best moment ... It was an evening that was remarkably light on actually giving awards to actors of color – notable shutouts included Kerry Washington, Don Cheadle, Idris Elba, Lupita Nyong’o, Barkhad Abdi and Chiwetel Ejiofor. But Reese Witherspoon got to introduce nominee "12 Years a Slave," and U2, winning for their song "Ordinary Love" from "Mandela: Long Walk to Freedom," praised Mandela while noting, "It has taken 35 years to write this song." Gosh, that must have been such a tough 35 years for you guys.

Of course he wasn't there. Of course Twitter briefly exploded with fury over his past. And Diane Keaton quite weirdly got up and sang "Make New Friends." The last word, however, came from Mia Farrow, who tweeted, "Time to grab some icecream & switch over to #GIRLS." Farrow out!

The ladies got the best one-liners of the night, but props to the Mexican director, who picked up an award for "Gravity" and joked about his heavy accent by relating the moment he told Sandra Bullock, "I'm going to give you herpes." He quickly added, "I really meant, 'Sandra, I'm going to give you an earpiece.'" Yeahhhhh, I'd still wipe it down first.

Did we know until Sunday night that we'd been waiting over 20 years for McConaughey to make a "Dazed and Confused" reference? The Texan, winning for "Dallas Buyer's Club," gave a shoutout to the film that launched his career, quoting his character David Wooderson's catchphrase as he accepted his award with an "All right all right all right." And like the night itself, it truly was.