Bill and Emma Keller's stories prompt an outcry, but they say it's your problem 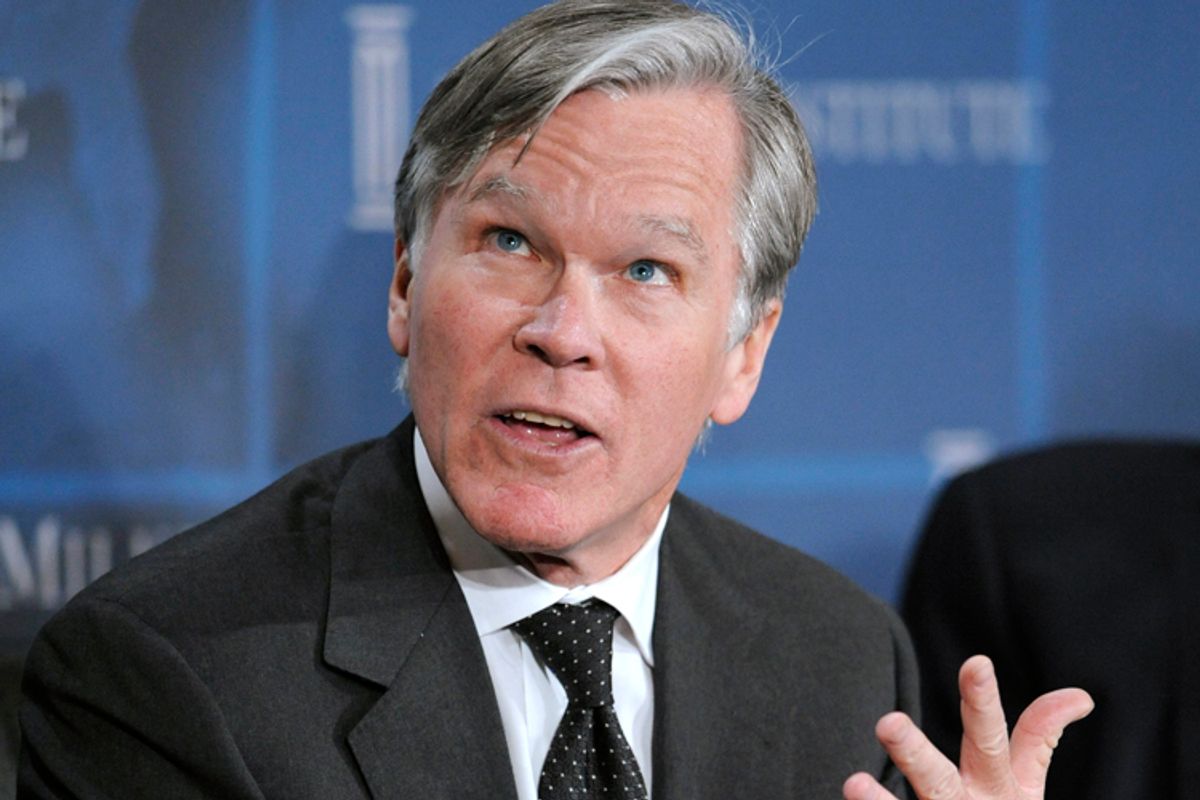 Emma and Bill Keller think the problem is that you're not reading them right. The media power couple, you see, have a lot of issues with the way that Lisa Bonchek Adams is handling her cancer. When you're a husband and wife writing team for the Guardian and the New York Times, you get to express your discomfort on a very big public platform. And when Emma and Bill Keller published, in the space of a few days, two pieces concern-trolling different aspects of Adams' cancer experience, they found themselves facing a surge of rebuttals. But that's because you just don't get them, do you?

Adams is a prolific writer and mother of three who's been chronicling her experience of metastatic breast cancer over the past few years. She is currently in Sloan-Kettering's hospital facility, receiving treatment. In her blog posts and her tweets – of which I am an unabashed fan – she writes with poetic grace of setbacks and pain and fear, but also of, as she says, "finding beauty in the small moments." As one who – full disclosure – has also been a Stage 4, metastatic patient at Sloan-Kettering, I've long found her writing eloquent and resonant. (I also discussed her reactions to the Kellers' pieces with her on Twitter.) No one who's a reader could accuse her of being either maudlin or unrealistically bright-sided. "It is important for everyone reading this blogpost to know that despite all of the hype and exclamation points and strong language about a cure or the promise of successful long-term targeted agents for metastatic breast cancer so that it can be more like a 'chronic disease,'" she says, "we are not there yet."

Emma and Bill Keller are worried about Lisa. So first, Emma Keller wrote a piece for Guardian last week titled "Forget funeral selfies. What are the ethics of tweeting a terminal illness?" She referred to Adams, in the very first sentence of her story, as "dying," later declared her "dying out loud" and asked, "Is this the new way of death? ... Should there be boundaries in this kind of experience? Is there such a thing as TMI? Are her tweets a grim equivalent of deathbed selfies, one step further than funeral selfies?" She further questioned Adams' etiquette regarding uninvited visitors to her hospital, noting, "You can put a 'no visitors sign' on the door of your hospital room, but you welcome the world into your orbit and describe every last Fentanyl patch." She also, in the course of the narrative, published a personal exchange she and Adams had a few months ago. The entire thing was ill-informed and gross, from taking it upon herself to diagnose Adams as "dying" – Adams describes herself right there in her hard-to-miss bio as "living" with cancer – to her dismissive equating of Adams' "compulsive" writing with the selfies of narcissistic teenagers to her cavalier posting of a private correspondence. And it made Adams appear to be a woman wasting away in a hospice, instead of a patient actively undergoing treatment.

When readers began  expressing their problems with the piece on Twitter, Keller promptly cut them off, saying, "If you would like to respond to me please do post on @GuardianUS. I won't respond to individual tweets." She did, however, later add, "It has been an overwhelming experience to be so misread to say the least!" Yes. Being completely mischaracterized must be so overwhelming for you. On Monday, the Guardian removed the story, "pending investigation." The Times reports that "A person at The Guardian with knowledge of the process said that the column’s tone and substance had been under review since it was published."

Keller two years ago wrote of her own  diagnosis of "Stage 0" breast cancer and subsequent mastectomy. "My goal all along has been to put this experience behind me as fast as possible before carrying on with life as normal," she said at the time. "The cost is insane, the trauma has been considerable." She no doubt brings her own experience and ideas of how things should be done to the table. And so does her husband.

On Sunday, Bill Keller added his two cents to the whole "Who is Lisa Adams and do we think she's having cancer the right way?" debate, with a New York Times piece on "Heroic Measures." (I'm not linking to it because it doesn't deserve the page views.) In it, he expresses his support for "her decision to treat her terminal disease as a military campaign" but contrasts Adams' experience as "the opposite" of that of his father-in-law, whose "calm death" two years ago "seemed to me a humane and honorable alternative to the frantic medical trench warfare that often makes an expensive misery of death in America ... There is something enviable about going gently." It’s an unfortunate depiction of Adams, and her own characterization of her treatment, which staunchly rejects the images of battle and warfare. And it has a decisively judgmental attitude toward a woman who's receiving "not just constant maintenance and aggressive treatment but such Sloan-Kettering amenities as the Caring Canines program, in which patients get a playful cuddle with visiting dogs." Keller darkly says MSKCC wouldn't tell him "what all this costs." The hospital's dog program, in case you were led to believe this is a grand luxury but do have access to Google, is volunteer-based.

His suspicious view of Adams' treatment center isn't limited to the dogs either. "Lisa Adams’s defiance has also been good for Memorial Sloan-Kettering," he says, calling Adams "a cheerleader for cancer research in general and Memorial Sloan-Kettering in particular." A cheerleader, who unlike legitimate writer Bill Keller, recently "pecked" out a few words "the other day after a blast of radiation." Perhaps because Bill Keller has his own agenda regarding healthcare? And in the end he quotes Steven Goodman, an associate dean of the Stanford University School of Medicine, who warns against being too enthusiastic about Adams, and says, "I’m the last person to second-guess what she did. I’m sure it has brought meaning, a deserved sense of accomplishment. But it shouldn’t be unduly praised. Equal praise is due to those who accept an inevitable fate with grace and courage." Because apparently everything Lisa Adams does day in and out lacks grace and courage.

It didn't take long for several readers -- notably Boing Boing writer Xeni Jardin, who's written extensively over the past two years of her own breast cancer experience, to call BS on the whole thing. "LADIES WITH METS SHOULD BE SEEN AND NOT HEARD," she tweeted Sunday night, in a multipart blaze of rebuttals.

By late Monday afternoon, Times public editor Margaret Sullivan weighed in, helpfully quoting readers who rightly pointed out that Keller's equation of a relatively young woman's breast cancer with his elderly father-in-law's disease was inaccurate. "She’s getting treatment for pain in her bones," a reader explained, "the type of tumors that won’t kill her till they spread elsewhere which may be soon or may be years away." Sullivan also noted that "One of the odd aspects of the column is that it follows, by just days, a column about Ms. Adams by Mr. Keller’s wife." And she added, on a somewhat personal note, "I’ll go so far as to say that there are issues here of tone and sensitivity."

But Bill Keller himself remains steadfastly supportive of Bill Keller. "I think some readers have misread my point, and some – the most vociferous – seem to believe that anything short of an unqualified 'right on, Lisa!' is inhumane or sacrilegious," he told Sullivan. "But I’ve heard from readers who understood the point and found it worth grappling with."

There is so much condescending and arrogant in that paragraph, I hardly know where to begin. Keller writes a piece that's riddled with errors from the very first sentence, and then he blames the backlash on people "misreading" his point. He insists the criticism is because he wrote something that wasn't "an unqualified 'right on, Lisa!'" And then he nobly acknowledges that at least some readers "understood the point."

I don't know how stupid Keller thinks New York Times readers are, but believe me, plenty of us have basic reading comprehension. In his story, Keller writes, "Lisa Bonchek Adams has spent the last seven years in a fierce and very public cage fight with death." I understand that sentence just fine. I understand it's incorrect. Adams, as she herself repeated Tuesday, was first diagnosed several years ago but "received a diagnosis of metastatic breast cancer in October, 2012. Period." Her "very public" blog begins in 2009. Keller writes of Adams' "resolute calls to 'persevere,' as if she's talking of aggressive treatment, failing to note it's part of her regular mantra to "Find a bit of beauty in the world today. Share it. If you can't find it, create it. Some days this may be hard to do. Persevere." Keller writes, "Neither Adams nor Sloan-Kettering would tell me what all this costs or whether it is covered by insurance." He further adds, "Whether or not this excellent care has added months or years to her life, as she clearly believes, is a medical judgment, and her doctors, bound by privacy rules, won’t say." I understand that these statements imply he contacted a cancer hospital to try to obtain information about a patient there to try to make some self-serving point, which is a despicable, loathsome move. And I understand that he then petulantly framed his lack of details as Adams and the hospital being uncooperative with him. Keller even originally got the number of children Adams has incorrect. (It has since been corrected.) Sorry, who has a reading problem, again? I also understand that one can live with an incurable disease without going quietly like Bill Keller's father-in-law.

There is no denying that there are plenty of conversations to be had regarding the ethics of medical treatment. Last fall, Stephen H. Hall wrote an in-depth cover story for New York magazine about the high cost of cancer treatment that sparked a fair amount of attention and debate. At the time, I said I was outraged at the high cost of treatment too, but wished some of the truly stunning breakthroughs – which will have a game-changing impact on how cancer is treated – were acknowledged. The comments on his story reflected a variety of information and perspectives. Hall and I eventually had a brief email exchange, and while I still disagree with many of his points, I remain incredibly grateful to him for sparking a realistic, courteous conversation, both in public and private, about the difficult realities of cancer treatment.

That's all you need to do. If you're looking for fodder for your thinky pieces, try to remember that people with cancer – even people with advanced cancer – are sentient humans and deserve the respect and dignity of basic accuracy in reporting. Their health and their treatment deserve to be characterized correctly. Their facilities deserve to not be smeared for providing them services. In those regards, both Kellers failed miserably. And you know what? Here's an unqualified right on, Lisa.