Add the Fox News host to the list of conservatives backing a minimum wage increase. Here's what's really going on 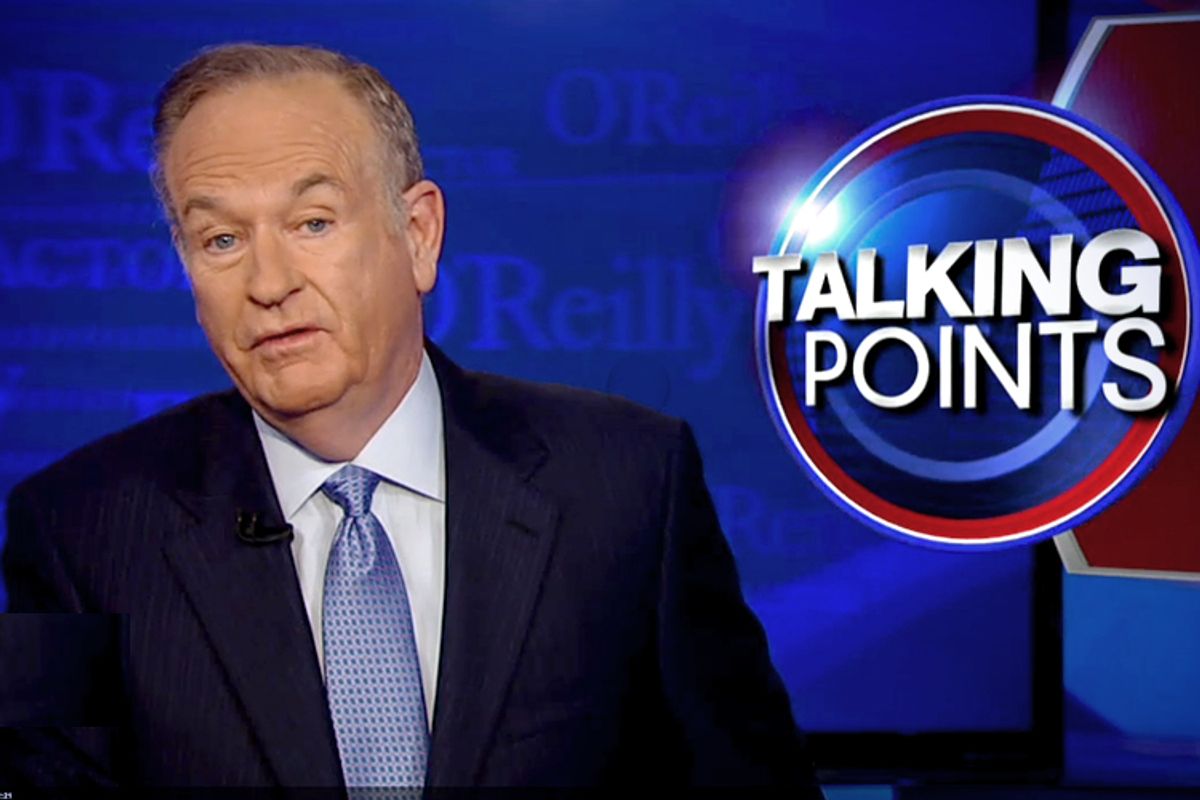 Pope Francis might have earned his title as Person of the Year for championing issues like economic justice, but for the Republican Party faithful across the country, another spiritual leader — Fox News host Bill O’Reilly – has just joined the debate raging over inequality: declaring support on national cable television for a proposal to raise the minimum wage to $10.10.

Noting that the overwhelmingly majority of voters (including GOP voters) now support President Obama’s proposal to raise the federal minimum wage from $7.25 per hour to $10.10, O’Reilly Friday shrugged his shoulders and confidently offered his own blessing, stating, “I say fine, up it. I don’t think it’s a big deal.”

When O’Reilly’s guest, fellow Fox News contributor Lou Dobbs, reminded him that President Obama had originally supported a more modest increase to $9 per hour before backing the $10.10 proposal offered by congressional Democrats, O’Reilly insisted that his mind had been made up, saying, “Ten bucks is OK with me.”

To some extent, the significance of this cannot be overstated: recall that another GOP standard bearer, Ronald Reagan, felt so certain about the calamitous consequences of the very existence of the minimum wage that he declared while campaigning in 1980 that “the minimum wage has caused more misery and unemployment than anything since the Great Depression." Or that Sen. Lamar Alexander, R-Tenn., thinks the minimum wage should be abolished entirely.

And yet, particularly for many viewers outside the Beltway, it’s possible that O’Reilly’s endorsement of a long-overdue raise for America’s lowest-paid workers might not have felt like heresy at all. That’s because the bulk of rank-and-file Republican voters in the U.S. have long expressed more consistent support for raising the minimum wage than GOP elected officials.

For example, while House Republicans did not blink before voting unanimously last year to block an amendment that would have raised the federal minimum wage to $10.10 per hour, a Quinnipiac poll from earlier this month found that fully 52 percent of Republican voters across the country actually support an increase in the federal minimum wage, with over half of those in support saying that the minimum wage should be raised to at least $10.10 per hour or higher.

Now, though, a shift in the party line on raising the minimum wage appears to be taking hold. During the height of the Republican primary season in 2012, Mitt Romney declared his support for indexing the federal minimum wage to rise each year with the cost of living. Since then, other conservative voices and business-friendly leaders, like former New York City Mayor Mike Bloomberg, have called for raising the minimum wage, and Rep. Peter King, R- N.Y., has said he’d be open to an increase.

And some prominent conservatives are now starting to put their money where their mouths are: Ron Unz, a tech industry billionaire and former Republican candidate for governor in California recently announced the launch of a self-financed effort to place a measure on the ballot this November to raise California’s minimum wage to $12 per hour.

One possible explanation for this change of heart among conservative leaders could be that the traditional shopworn arguments against raising the minimum wage no longer find support from any credible economic research today. Methodological advancements over the past 20 years have led to a virtual consensus in the academic literature around the conclusion that minimum wage increases remain an effective – and budget-neutral – approach to raising pay for low-wage workers without reducing employment or causing a large spike in prices.

The key question now is what this shift in thinking might mean for Republicans in Congress. Will a new openness to raising the minimum wage within the GOP establishment – combined with majority support from Republican voters themselves – finally allow Mitch McConnell and John Boehner to reconsider their knee-jerk opposition?

With each year that passes, the urgent need for an increase in the minimum wage will only continue to grow as more workers find themselves relying on low-wage jobs to make ends meet – and opponents who continue to fight against such a modest pay raise will find an ever-shrinking number of allies in their corner.

Jack Temple is a policy analyst at the National Employment Law Project.