"Brooklyn Nine-Nine" is airing post-Super Bowl. That may not change the ratings -- but it doesn't really matter 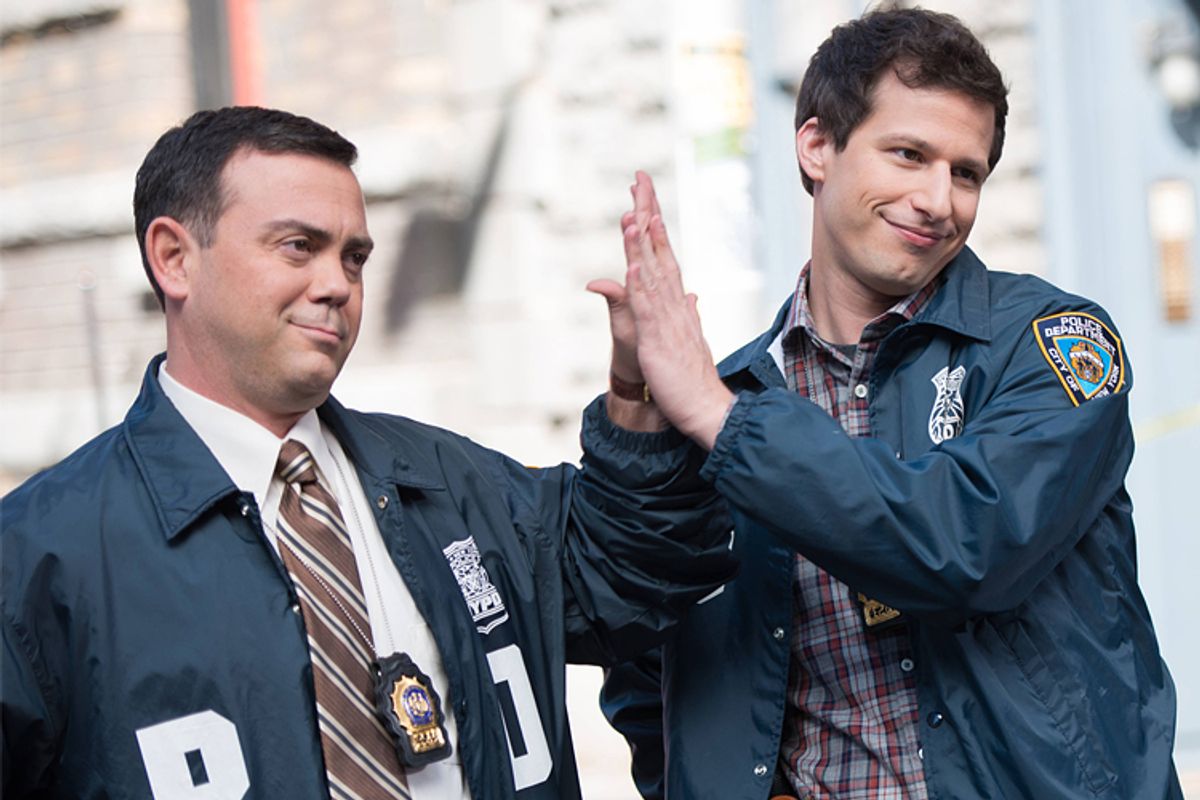 "Brooklyn Nine-Nine" stunned Hollywood over the weekend by claiming two Golden Globes -- beating reigning champ "Girls" and ratings sensation "The Big Bang Theory" to the best TV comedy prize and looping in Andy Samberg for the best actor in a comedy honor. This came just as the series, in its first season, is about to get its biggest spotlight yet -- it's one of two Fox comedies airing after the Super Bowl. And the network's president told television critics on their press tour that he expects the show will get a second season -- this despite its relatively low ratings so far.

The show, set in a loopy outer-borough police precinct, would seem to have everything going for it -- a secure place on the schedule, two big awards early in its run, and the confidence of the network. So can it become a hit?

The Super Bowl lead-out time slot, as it's known, is a good indicator of a network's top priority, given the wide audience one can presume just leaves their television on after the game ends. There are three categories one can slot post-Super Bowl programming in recent years: an existing hit the network wants to convert into a mega-hit, a series the network wants to launch in a huge way, or a ratings-challenged but creatively strong show the network wants to reintroduce to the public.

In the former category, looking at recent post-Super Bowl airings, one can slot "Glee," "House," "The Office" and "Grey's Anatomy"; in the second, the debuts of "Jimmy Kimmel Live," "Undercover Boss" and two seasons of "Survivor"; in the third, "Alias" and this year's Fox comedy block of "New Girl" and "Brooklyn Nine-Nine."

Fox's four-episode Tuesday night is a major priority for a network with few ratings bright spots lately, but critical praise for three of the four comedies (sorry, "Dads") aside, it's not a strong performer. "New Girl," for instance, has lately hovered between 3 million and 4 million viewers per episode, a big decline from its hit first season; "Brooklyn Nine-Nine" does about the same.

And yet the Super Bowl may not do as much as Fox executives would hope. One x-factor is the end time of the game: last year saw CBS's hopes for huge ratings for "Elementary" evaporate when the sports broadcast ended after 11. Furthermore, the needle wasn't substantively moved on the ratings for post-Super Bowl comedies like "The Office" in 2009 or "Glee" in 2011 after their big spotlights. The shows were sampled by a big audience for a single episode, then fell back down to their pre-Super Bowl ratings.

More than anything, the Super Bowl placement indicates just how much a priority it is for the Tuesday night comedy block to work -- as if that wasn't already clear from the network placing a splashy and thematically very different show, "Dads," at 8 o'clock, to entice an entirely different demographic to stay on for "Brooklyn Nine-Nine," "The Mindy Project" and "New Girl."

Part of why "Brooklyn Nine-Nine" will get another season to prove itself is the same reason "Parks and Recreation" and "Community" keep coming back to NBC; when a network has a number of trouble spots, there's no reason to cancel something with a devoted core audience and critical acclaim. Fox's entertainment chairman, Kevin Reilly, candidly admitted yesterday that "The X-Factor" would need to be retooled if it were to return at all and that new comedy "Enlisted" had been a ratings disappointment.

The Super Bowl won't really change "Brooklyn Nine-Nine's" ratings. But the definition of a hit is slowly changing to suit "Brooklyn Nine-Nine" and its fellow Fox comedies. Reilly said that though "The Mindy Project" was low-rated, it would likely be renewed because "it is highly upscale, we make money on it, it has a desirable audience."

Even if little is to change with regard to "Brooklyn Nine-Nine," it contributes to the sense of Fox as a place for intelligent, "upscale" (viewed by wealthy folks) comedy. It may not become a true hit -- but hits are in such short supply on network TV these days that Fox is likely to take what it can get, including big prizes.