The ambitious Democrat defies the White House again and backs a tougher sanctions bill. He says he’s trying to help 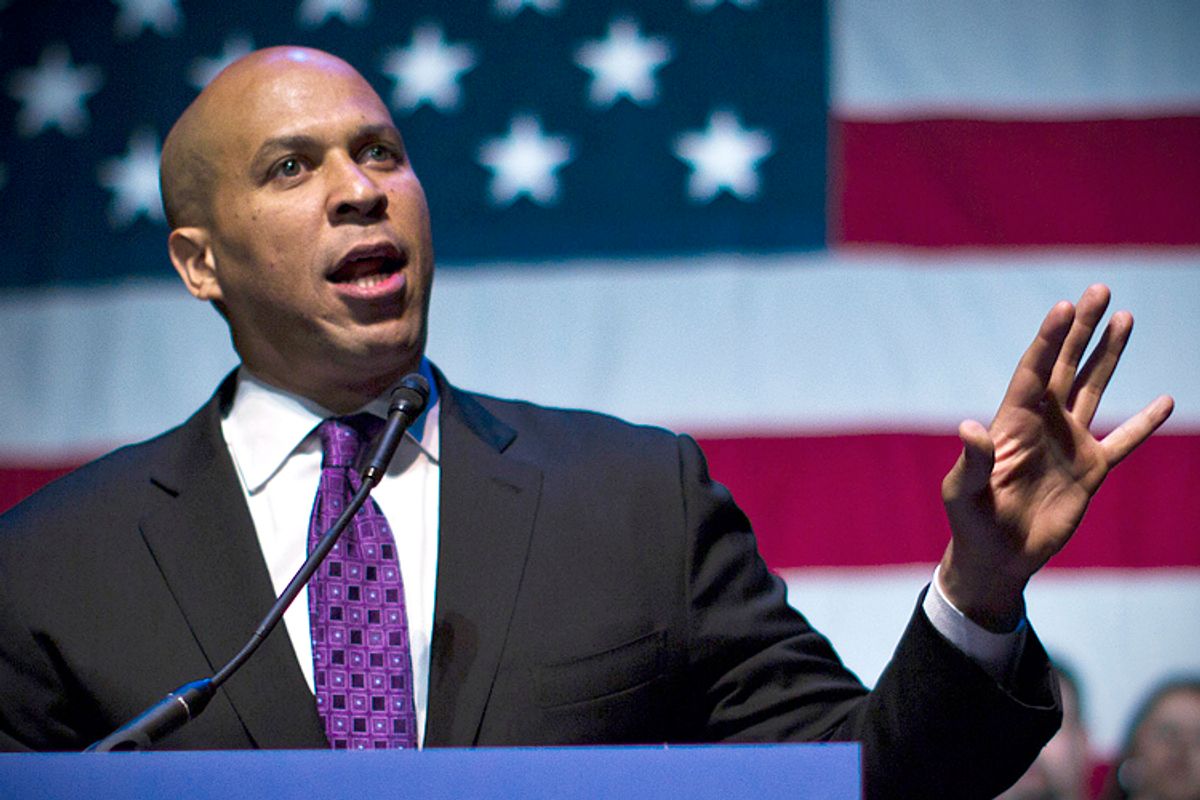 Maybe it’s unfair to single out freshman Sen. Cory Booker for cravenly supporting a bill that defies the Obama administration and toughens sanctions on Iran when, unbelievably, he’s only one of 59 co-sponsors, including 16 Democrats. But since Booker is politically shrewd as well as nakedly covetous of national attention, it’s inevitable that he’d come in for extra-special attention.

This New Republic piece immediately went viral on Twitter Tuesday morning, with Ploughshares president Joe Cirincione asking for a lot of us:

Of course Sen. Ted Cruz and other right-wing extremists are openly using a tougher sanctions bill to undermine the administration and accuse it of “surrendering” to Iran. Booker paints himself as trying to help the president. "I'm 4 additional sanctions if current negotiations fail 2 start or fail 2 work," he Tweeted to an irate follower.

An unnamed Democratic Senate aide told the Huffington Post about the bill: "The goal isn't to disrupt things, it's to make Iran even more willing to make serious concessions by making them aware of what will happen if they don't."

After this post first went up, Booker's press secretary Monique Waters sent me this statement: “The senator strongly supports the Obama administration’s efforts to negotiate limits on Iran’s nuclear ambitions. The goal of the proposed legislation is to give US negotiators leverage, to hold Iran accountable and to ensure that its leaders understand that if they fall short of their commitments, there will be consequences.”

But the president has made clear he doesn’t want such help, threatening to veto the bill should it pass.

This isn’t the first time that Booker has set himself up as somehow wiser than the president. You’ll recall that back in 2012, as an Obama surrogate, he nonetheless said that the campaign’s attacks on Mitt Romney’s Bain Capital career were “nauseating” and urged Democrats to "stop attacking private equity." He was forced by campaign officials to backtrack with what looked like a hostage video. But he was widely – and correctly – seen as trying to curry favor with wussy Wall Street donors who had their feelings hurt by Obama calling them “fat cats” and questioning Romney’s Bain work, even after the president bailed them out.

This time Booker is thwarting not only the president but the will of the war-weary American public. He and other ambitious Democrats like New York’s Kirsten Gillibrand, and Colorado’s Michael Bennett (chair of the Democratic Senate Campaign Committee) who also, disappointingly, support the sanctions bill, might think their stance is smart in terms of both politics and fundraising, but politically, at least, they’re wrong.

Or at least I think they are. There hasn’t been much organizing against the sanctions bill, or much outrage among progressives, although a new coalition of groups including MoveOn, Credo, J Street and others sent a letter asking senators to oppose the bill Monday. It’s undeniable that New Jersey Gov. Chris Christie’s troubles are sucking the oxygen out of liberal punditry, online and on television. But the Christie story isn’t going away, and right now I’d say reporting on his administration’s many ethical conflicts is more valuable than opining. Antiwar progressives need to pay attention here.

According to Greg Sargent, 30 Democrats haven’t taken a position yet on the sanctions bill. They should have to. The New Republic takes it as a good sign that 2016 front-runner Hillary Clinton hasn’t supported it, suggesting she has learned her lesson from her disastrous 2002 vote authorizing the use of military force in Iraq, which helped Obama defeat her in the 2008 primary. Actually, I find Clinton’s silence odd. Given that she worked for the president, there’s absolutely no way she could come out and support a sanctions bill, so her silence means nothing. I’d like to see her speak out against her former Senate colleagues’ misguided foreign policy venture.

It’s disappointing that while Democrats seem to have gotten the New Year’s memo that economic populism is a winning message, they’re showing no such spine in defying the war lobby.

An earlier version of this post quoted the senior Democratic aide as a Booker aide, citing The New Republic. TNR has since clarified its attribution. I should have gone to the original story in the Huffington Post, where the aide is correctly identified. My apologies.