How Pope Francis brought me back to Catholicism

The church of my youth shut out so many people. The new pope is changing that 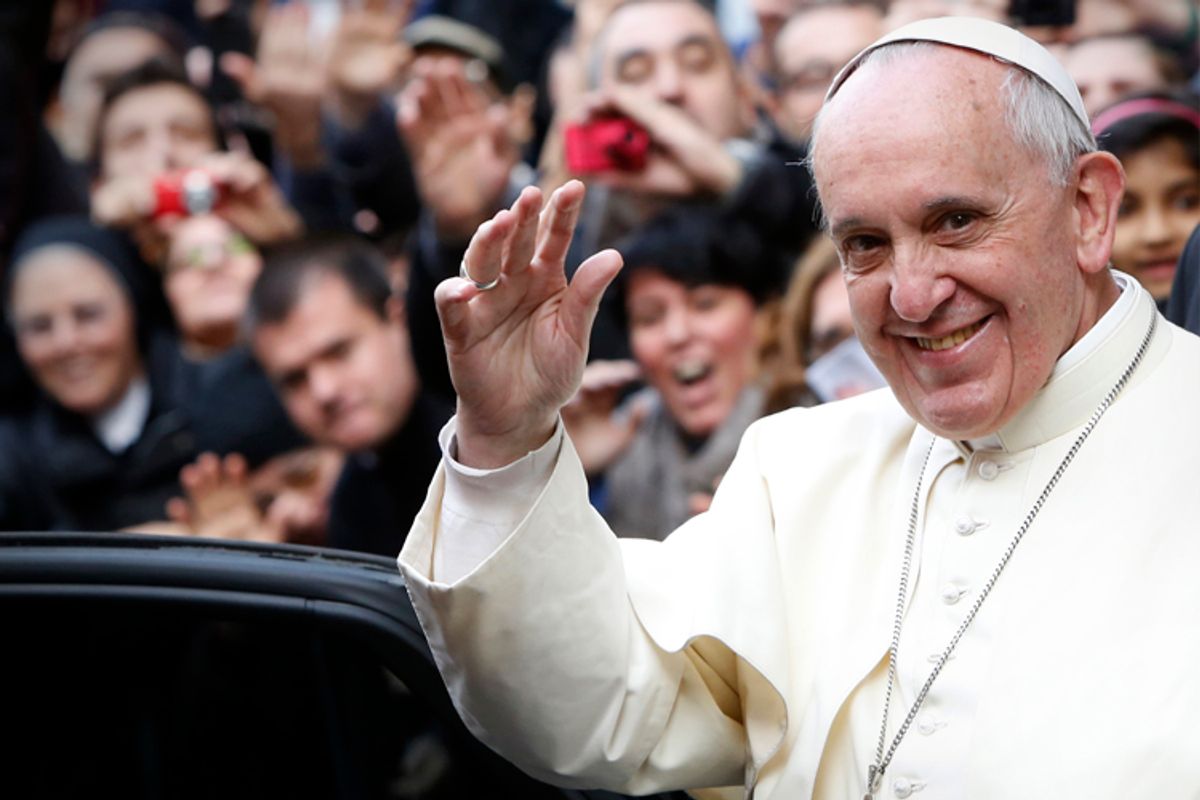 Until recently, being Catholic evoked the same shame in me that I felt when I was poor. Thirty years ago, I obediently followed my mother to the mysterious, majestic cathedrals of my youth to kneel at the foot of the saint I loved most, Saint Francis of Assisi. He had turned away from a life of wealth, like Buddha, to answer God's call to repair the church. At the foot of his statue in New York City's Saint Patrick's Cathedral during the 1980s and 1990s, I remember the echo of ACT UP activists disrupting homilies while my mother, Marguerite, muttered disapproval. Homosexuals were evil, she said.

We knew little about AIDS then. Death and dying to us were more foreign than the daily struggle to survive our homelessness and hunger. Marguerite was black and bipolar with borderline personality disorder. She pursued Jesus and the saints of God with a manic fever that obscured everything else a girl should know about a mother. She was never without a rosary near her palm, and she pinned the medals of saints inside her blouse to keep sanctity near her flesh.

That fervor drove me away from Catholicism as a teenager. I didn't long for it again until the second anniversary of my mother's death from cancer at 72. Pope Francis, Time's 2013 Person of the Year who took the patron saint of the poor as his namesake, awakened in me a renewed sense of faith in the Catholic Church. His ascendancy offered me a glimpse at something like a spiritual homecoming.

Roman Catholicism boasts more than a billion members worldwide, with the largest number of adherents in Latin America and Europe. A number of stories have already been written about this new pope, who has urged us through both apostolic exhortation and media interviews to move away from judgment of sinners and sin -- what we all are, what we all do -- in favor of doing the work of his namesake.

The Pope Francis Effect -- his ability to bring Catholics back to the faith -- is statistically limited in America, except anecdotally. My religious friends, from Catholic and other traditions, describe him in an almost universally breathless manner. Rachel Kaadzi Ghansah, a New York-based writer, was raised Catholic, along with her sister. Though she attended Quaker schools, she remained Catholic as an adult. "It's a unique experience to be black and Catholic," she explained, "and I felt like it would be a loss not to be a part of that. This is as much a part of me as being black. I didn't want to let go of the cultural heritage and the common language of that."

But previous popes haven't prompted her to post on Facebook, as she did recently, that the pope is amazing. "He is a wonderful representation of the good and progressive work that can come out of that space, a recovery of sorts. He also represents the postcolonial face of Catholicism."

Jennie Kennedy, based in Austin, wrote: "Anything we can do to bring attention to the plight of the poor is truly God's work, and Pope Francis is a much-needed symbol of this central tenet of the Catholic faith." April Dawn Klemm, a devoted longtime Catholic, said that while Pope Francis is not changing policy or church doctrine, he is moving the church in a direction that has brought her back to her church community after a six-month hiatus. "It's a direction toward community and love we haven't heard about from the top of the church in years. It lets me be a Catholic again without having to immediately feel guilty or explain away my faith. It gives me room to breathe as a Catholic when before I felt I was suffocating completely."

Popes aside, I never felt I could breathe in Catholic churches. I thought this was because I didn't see many other black people at the Masses we attended, or because Marguerite sometimes dragged me to Mass daily (before Catholic school for the day) or because she sang "Gift of Finest Wheat" in her embarrassing outside voice that made me wonder if she was trying to blast the devil back to hell. I felt indebted to the church when it cared for the poor, and Catholic Charities sometimes gave my mother and me money for food. In Harlem, religious women housed us after multiple Bronx evictions. God was looking out for us.

But I also sought a God and a faith community that would give me access to the Jesus I felt when I read Scripture. I wanted to seek God in a church that was more accepting of people of color, committed to social justice in visible, articulated ways and adamant about asking its people to suspend judgment of others for long enough to find Jesus where they were instead of where they thought others should be.

So when I was 15, I stopped going to church regularly. Mom begged me not to leave her alone in church. "All the other mothers have their children with them." I would not be moved until after she was gone.

On Christmas Eve, new to Washington, D.C., I arrived at the Basilica of the National Shrine of the Immaculate Conception. The only place where a seat was still available was an alcove dedicated to Saint Patrick and Mary, the Mother of Ireland. It had been years since my last confession, or even since I set foot in a church for Mass. I stared at the beautiful green marble holding my mother's pearl-like rosary, prayed for her, and left.

When I attended my new church home, Saint Augustine, a black Catholic church, for the first time, early in the homily the priest thanked Pope Francis for "making it cool to be Catholic again." Something tugged at me. Mom might not have agreed with Pope Francis, but she would have loved this place, this time.

Joshunda Sanders is a writer and journalist based in Washington, D.C.