The overwhelming whiteness of this year's Globes hurts artists of color, and audiences 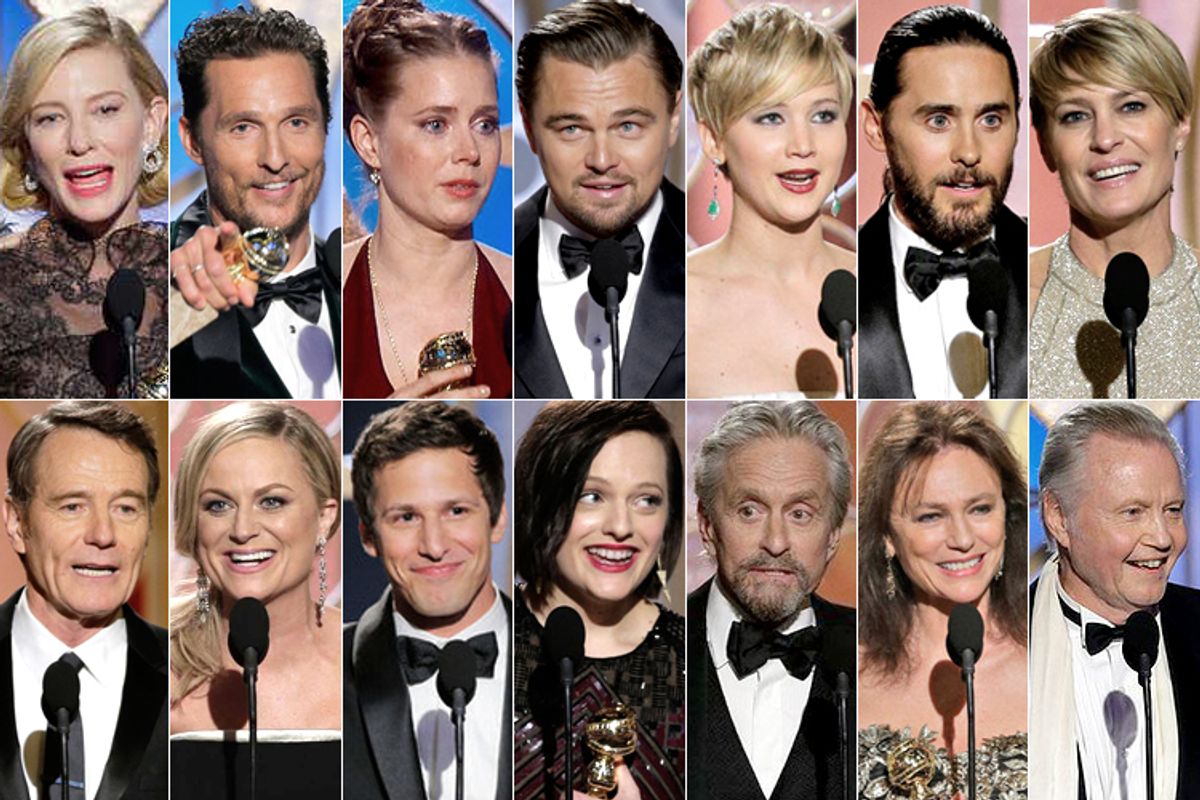 The winning actors and actresses of the 71st annual Golden Globe Awards.
--

We were there. We are always there, whether our nominations are sparse or relatively plentiful. Last night, nods for people of color at the Golden Globes were the latter, with Chiwetel Ejiofor nominated in two categories, his "12 Years a Slave" costar Lupita Nyong’o and director Steve McQueen also in the running, Don Cheadle up for his lead role in Showtime’s "House of Lies," and Idris Elba nominated for playing Nelson Mandela. As is the case when more than one or two of us are gathered in the name of Hollywood’s top honors, black viewers were also planted in front of their TVs at home and logged into their Twitter accounts, waiting to see if the winds of change were favorable.

We didn’t have to wait long. Lupita Nyong’o’s category was the first of the night. When she didn’t win best supporting actress in a motion picture for her gut-wrenching turn as Patsey, it should’ve been clear how the rest of the night would progress. But we watched and tweeted on, through Cheadle’s and Elba’s losses (which came as little surprise, given their competition). We shrugged off Ejiofor’s snub for "Dancing on the Edge" -- even he looked unsurprised by that one -- and we waited to hear his name called again, this time for playing the role of his career: Solomon Northup.

He lost. Adding insult to injury, he lost to Matthew McConaughey who, though he did great work in "Dallas Buyers Club," is no Chiwetel Ejiofor, even on his best day -- and especially not when he’s competing against Ejiofor’s work in "12 Years a Slave."

Not every person of color approaches Hollywood’s awards season with an eye toward race, but it can be difficult not to when Hollywood and pop culture media most certainly use a racial lens to peer out at non-white audiences. Much was made of USA Today’s “race-themed” headline gaffe a few months ago, but it underscored the truth of the marketing matter: “race” is still a conflating category in Hollywood. Across genre and regardless of quality, if a film has more than one actor of color in a lead role, it becomes a “race film” -- which is to say that it’s solely marketed to people who were once only allowed to sit in the decaying balconies of America’s movie houses.

This legacy of segregation still hovers over the black consumer’s relationship with Hollywood. People are quick to tell us not to take award-show snubs personally. They insist that awards are empty honors bestowed by folks who have little stake in the emotional response films evoke in their viewers. During awards season, “Stop waiting for the white man’s validation” is a common refrain in some black circles. But that’s easier said than done when we know just how long we’ve been padding Tinseltown’s coffers with our hard-earned cash, even when we had to subject ourselves to skulking into theaters through service entrances to see films where people who looked like us were rarely featured at all.

We get so preachy with one another -- talking about the importance of alternative media, of creating and supporting indie content, of appreciating the niche honors like the Independent Spirit or NAACP Image Awards, which go well out of their way to make sure diversity is celebrated. To be sure, those are important. Without them, many riveting performances by actors of color would’ve gone completely unacknowledged.

But the Hollywood Foreign Press-run Golden Globes mark the beginning of the “big time” in cinematic and small-screen honors. Debatable as their artistic merit often is, it’s absurd to write them off as meaningless to minority actors, directors and industry insiders -- especially since, historically, they’ve been far less likely to receive nominations.

Reuters even reports that a Golden Globe win has an economic worth that exceeds that of an Oscar win. Post-Globes ticket sales spike to the tune of $14.2 million (as opposed to $3 million for Oscar wins). Increased sales for winning films factor into the marketability of their stars.

It may be easy for those of us keeping track at home to console ourselves with the “awards are pointless” musings, but there are measurable reasons why this matters to Ejiofor, the seasoned British veteran who’s gone so often under-awarded, or Nyong’o, whose future in Hollywood may very well be contingent on how well this season goes. It would’ve mattered to first-time director Ryan Coogler, as well, if his riveting "Fruitvale Station" had received even one Globe nomination.

In truth, audiences of color will always have an emotional, perhaps even psychic, stake in Hollywood’s awards season. According to a 2011 BET Networks Corporate Research study, black consumers make 195 million trips to the movies annually. What we see, how we connect to it, and how that connection is acknowledged matters to us. As great as it would be to be able to ignore the import of mainstream validation, we can’t and we shouldn’t. In a year like this, when the front-running films featuring black actors are based on real people and events, we should feel fully justified in wanting these powerful dramatizations to be revered. Award wins are one way to affirm that we’ve told our stories to someone other than ourselves, to someone who would not have otherwise known them, to someone who may have been loath to acknowledge that they happened.

For those of us who weathered last night’s losses long enough to witness "12 Years a Slave’s" big win for best picture, that affirmation came just in time.