Will the new, energy-efficient light bulbs change the way we illuminate our homes? 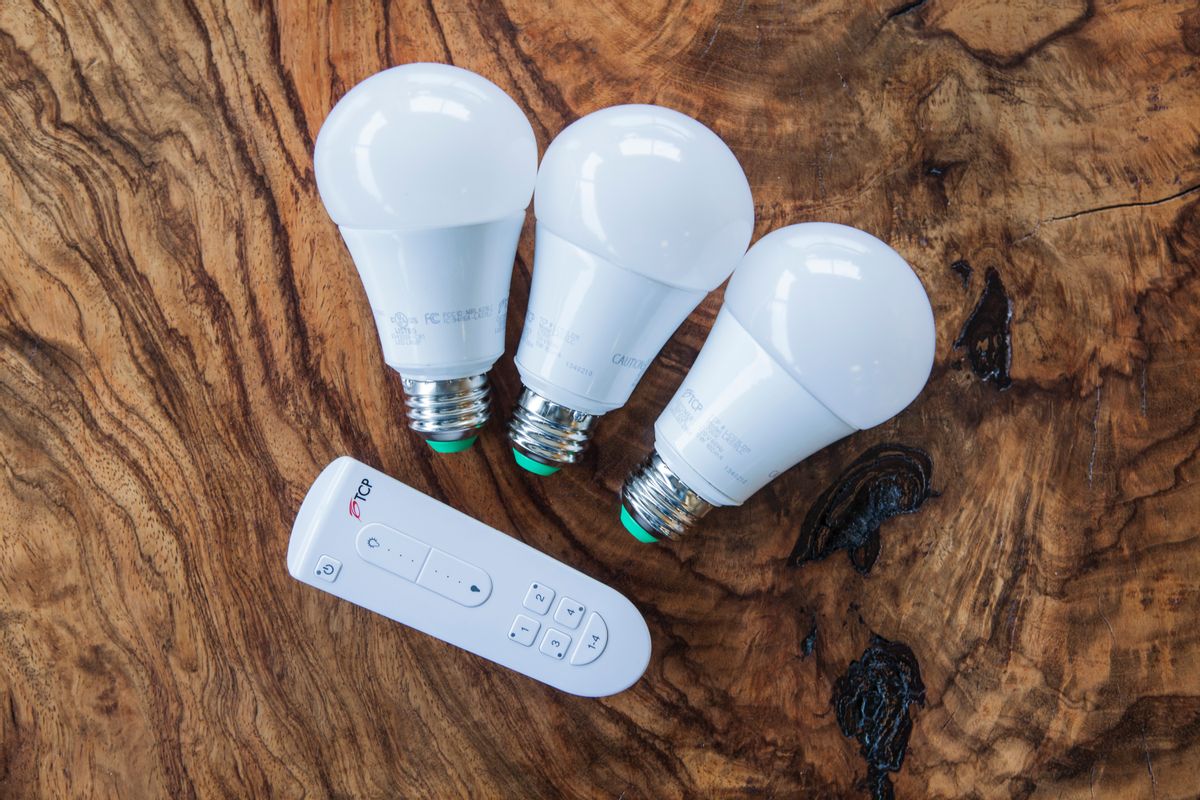 The lights in my room are turning on. Then off again. On. Off. On. Off. All on their own, without my ever needing to touch a light switch.

The Internet of Things has arrived in my apartment.

On Jan. 1, the federal government completed its gradual phase-out of the classic incandescent light bulb, rendering Edison, at long last, irrelevant. But while the EPA’s new push for CFLs (compact fluorescent lamps, i.e., "the swirly ones") and LED (light-emitting diode) bulbs represent a big step toward modernizing home lighting, it’s what people are doing with those bulbs that represents the true cutting edge.

The Connected by TCP “smart home lighting system” hopes to deliver on the promise of LED technology by giving its users a greater degree of control over their home lighting than was ever possible with incandescent bulbs. The system consists of three LED light bulbs, an Internet gateway that connects to your Wi-Fi router, and a hand-held remote. For simplicity’s sake (and also because my bedroom is small), I tested out just one bulb. The setup, even for something so seemingly complex and someone so technologically incompetent, was easy: I screwed the bulb into a lamp socket, plugged the gateway into my wireless router and, in about three minutes, gained the ability to control my lighting – including how bright I wanted it -- from anywhere in my apartment.

Simply being able to dim my lights – and to do so without having to get out of bed -- was intoxicating, and I spent a good 15 minutes luxuriating in that experience. But that was just beginning. Next, I downloaded TCP’s app, which allowed my iPhone to perform the same functions as the plastic remote. By logging into a secure network, I was now able to control that single light bulb from anywhere, and to schedule timers that enabled it to control itself.

From there, the possibilities seemed endless. Using the app, I scheduled my lights to turn on at their brightest at 6 a.m. -- a too-effective alarm clock that I would adjust the next morning by programming the  lights to turn on gradually. Later on, while rushing to catch a train, I was able to confirm remotely that I'd remembered to switch off the lights. Bored at work, I turned the lights on and off, on and off, curious to see if my temporarily unemployed roommate would notice, and wondering if she’d think our apartment was haunted. (She didn’t, but she was nonetheless impressed.) I attempted Morse code. I designed different settings for reading in bed, for watching television, for putting on makeup, for waking up to use the bathroom in the middle of the night. I made the lights brighter, then dimmer, then a little bit brighter, until they were just right, all the time, just because I could.

The experience got me wondering: Is it worth it to unlock my phone and open an app every time I want to turn on the lights? If it’s possible to have this much fun with one light bulb, what would happen if I had more? According to the manufacturer, the app can handle up to 250 endlessly configurable LEDs. Might one, given this degree of power, go mad? All questions, I decided, best pondered with the lights half-dimmed. I designed a setting for that one, too.

LED (and CFL) light bulbs can be just as bright as incandescents, yet they require far less energy to get there. TCP’s LEDs shine at 800 lumens, the equivalent of a 60 watt bulb – yet use only 8.5 watts of power.

The bulb I replaced in my bedroom was already a CFL, which has comparable efficiency to LEDs, so the switch wasn’t quite as dramatic for me. My newfound ability to dim the lights did add on a marginal amount of energy savings -- the amount used by LEDs is roughly proportional to their brightness – although the low energy requirements of LEDs is already so significant that dimming them a bit doesn’t make much of a difference.

There is one downside worth noting: Having complete power over your lighting requires a constant power source. TCP’s Internet gateway requires 5 watts to run, so (if you want to get technical about it) I’m using slightly more energy now than I was before, with non-smart, yet still energy-efficient bulbs.

As sustainable as the new light bulbs hitting the market are, it’s their versatility that’s really getting people fired up. “You can do more with LED technology than you ever could with incandescent,” said Taylor Jantz-Sell, the Energy Star Lighting program manager for the EPA, when I called her up to discuss the exciting future of lighting. I care that my lights are energy efficient, but it’s not like I go around bragging about it – I took far more pleasure in impressing visitors with the fancy lighting schemes I designed.

- People with the luxury of having more than one light bulb in their room can waste the better part of a day, or possibly a week, designing creative lighting schemes. Want some lights on while others are off? Some brighter and some dimmer? Given enough bulbs, could you make constellations? The possibilities are limited only by one’s willingness to sit and program them all individually.

- Another useful function of smart lights is security. Instead of leaving a few lights on for the entirety of your vacation, in the hopes of fooling a very unobservant criminal, you can control them from the beach (or, if you don’t see that as a proper use of vacation time, you can program them in advance to turn on and off at appropriate times).

- I should note that TCP wasn’t the first company to come up with the idea for wireless bulbs; it was simply the first that offered to send me a sample. Another take on the concept, to give just one example, is Philips Hue, which takes advantage of LEDs’ ability to span the color spectrum. Other systems can detect when you’re nearby and turn on automatically, flash when it’s raining or shine on during a power outage.

When it comes to energy-efficient bulbs, certain people aren’t just non-green -- they’re anti-green. A study published last year in the Proceedings of the National Academy of Sciences found that right-leaning consumers were less likely to shell out the extra cash for energy-efficient light bulbs when they were labeled with a sticker reading: “Protect the environment.” Now that incandescents are disappearing from shelves (a move that the old guard is raising a fuss about), we aren’t going to have much of a choice anymore, but perhaps innovations like this will at least make the medicine go down more smoothly.

Another potential problem with LEDs and CFRs is that they’re not always compatible with wall-mounted dimmer switches – at least not without some savvy rewiring. The TCP system saved me the headache (and, knowing me, electrocution risk) of attempting that.

A frequent, if shortsighted complaint about energy-efficient bulbs is that they cost more upfront. The sticker shock can be, well, shocking: LEDs are typically more than 10 times as expensive as incandescent bulbs.  Of course, they save money in the long run– for Energy Star-certified light bulbs about $6 a year in energy costs. Plus, they last 25 times as long.

The Connected by TCP system is an investment: the three-bulb starter set retails for $142.99, and each additional 60 watt-equivalent bulb costs $27.99. If you want to go brighter, you can pay $32.99 each for 65 watt-equivalent LEDs or $24.99 for 100 watt-equivalent CFLs -- but again, their energy usage is so low that the cost of running them won’t increase very much. According to TCP, the annual cost of running its three-bulb system, including that added bit of energy from the wireless system, comes to $4.80 a year.

If you’re still using incandescent light bulbs, you’re way behind the times. And the same will soon be said if you’re not controlling your new, energy-efficient light bulbs with your smartphone.