The right's boneheaded analogy: No, Christie's debacle is not similar to the IRS case

Thwarting the right's Bridgegate-IRS comparisons, an FBI probe finds no evidence of vengeance by Obama 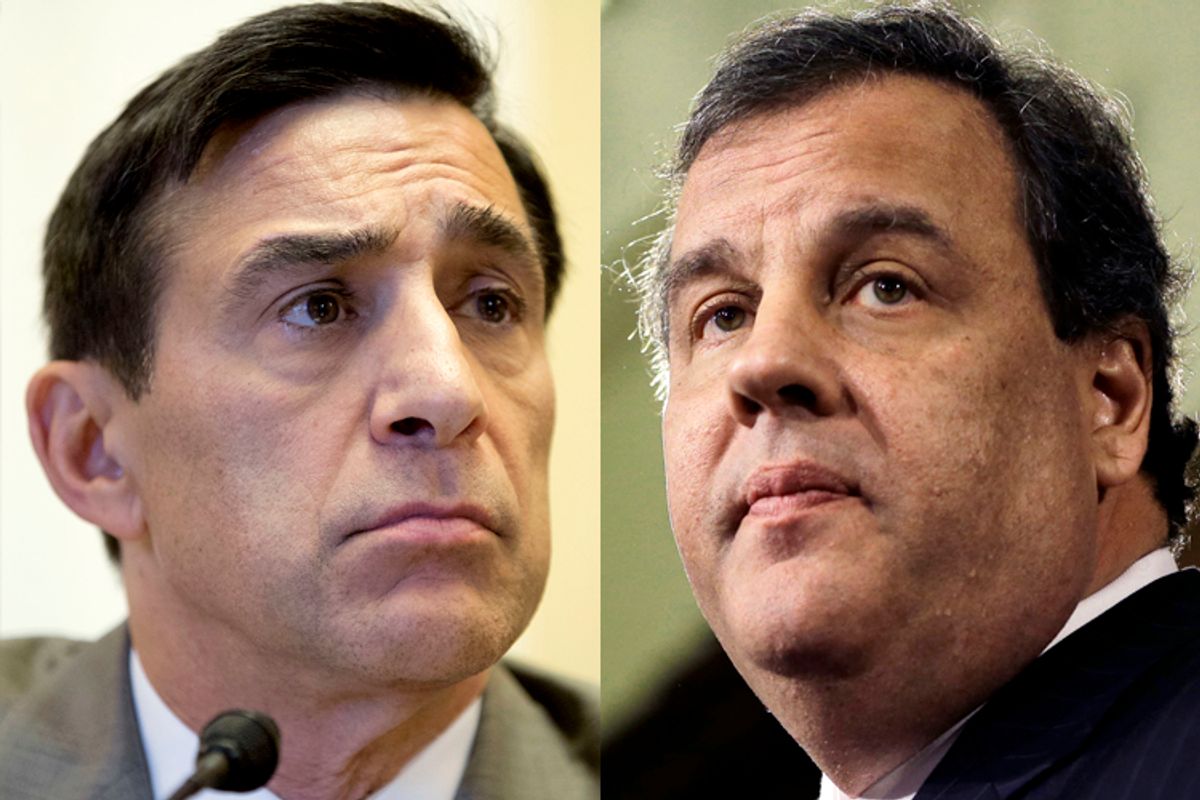 Conservatives haven’t been able to deny the facts at the heart of Gov. Chris Christie’s traffic scandal: Their own texts and emails show that top Christie staff shut down crucial lanes to the George Washington Bridge in apparent political retribution and then tried to cover up their plot. So far the right’s most reliable way to minimize the scandal has involved insisting President Obama or his top staff committed far worse deeds, and their favorite comparison is last year’s IRS controversy, in which it was first alleged that some agents targeted Tea Party groups for special scrutiny for ideological reasons.

In fact, the Wire found that the IRS scandal was mentioned 15 times on the big Sunday shows just this last weekend, by hosts and guests, more often than “Fort Lee.”

Sadly for conservatives, though, the FBI chose Tuesday night to make those comparisons a little tougher: It announced that no one will be prosecuted in the IRS mess, because it found that the Tea Party “targeting” was part of a larger, poorly executed effort to handle a flood of new political groups on the left and the right claiming exemptions. The ham-handed process represented bad management, not an ideological vendetta.

Bridgegate-IRS comparisons were always specious, and always relied on phony data. The New York Post’s John Podhoretz argued Saturday  that the IRS scandal was ignored by the media, while Christie’s was hyped, because … liberal media. That’s been Rush Limbaugh’s line too.

Podhoretz also relied on a deeply dishonest Media Research Center study (is there any other kind?) showing that the three major networks devoted 44 times the coverage to Christie’s bridge scandal in just two days than they had to the IRS story in the last six months.

That study certainly indicted the networks – for failing to cover the IRS story as reams of information emerged that exonerated the administration of political wrongdoing. As Media Matters shows graphically, after weeks of five-alarm scandal coverage, network and cable attention subsided just as the truth came out: that the agency was struggling to keep up with an increase in political groups seeking tax exemption and was wrongly flagging all kinds of labels for extra attention – not just groups with “Tea Party” in their name but also “progressive” and “Occupy,” along with open source and pro-Palestinian organizations.

And of course, MRC deliberately skewed its research by comparing the last six months of IRS coverage to the week Christie’s scandal broke, when the IRS was big news eight months ago. In fact, in mid-May, the scandal dominated both network and cable news coverage along with print and online sources. Dartmouth's Brendan Nyhan showed how the stories preoccupied major papers and Politico for a while, but by the time information came out about progressive groups being included in the IRS dragnet, there was almost no coverage. What MRC's research actually shows is that the networks treated the Obama administration unfairly, by hyping the original IRS scandal charges, but then ignoring the evidence that emerged to exonerate the White House from claims it targeted its enemies. Thanks, Brent Bozell!

IRS-Bridgegate comparisons always struck me as ridiculous for another reason: There was never any kind of evidence linking President Obama and his top staff to the IRS mess. The only way the two problems would be directly comparable would be if we’d found that an Obama deputy chief of staff  -- Rob Nabors, for instance – emailed a high White House appointee in the IRS to say: “Time for some tax problems for the Tea Party,” to which his IRS colleague answered, “Got it,” launching the Tea Party counterattack.

No such email exists because that never happened. Still, the right has never let the facts get in the way of its paranoid, self-pitying IRS delusion. They won’t let the FBI’s decision stop them either.

“It appears that the FBI is in the pocket of the Department of Justice and the White House,” Tea Party attorney Cleta Mitchell told World Net Daily. Rush Limbaugh railed against the FBI’s decision on Tuesday, too.

Rep. Darrell Issa isn’t satisfied either. "There is little reason for the American people to have confidence in this investigation,” he wrote in a letter to Holder.

So the IRS “scandal” will fade as investigations wrap up and conclude no deliberate wrongdoing. Not so with Christie’s scandal, where investigation is just beginning. Still, don’t expect the right to completely give up on the comparison, because of course, the media haven’t trumpeted the FBI’s decision not to prosecute anyone the way they did its decision to investigate the allegations of bias in the first place. The notion that the media protect this president is preposterous, but the right wails about it because it knows working the refs usually works.