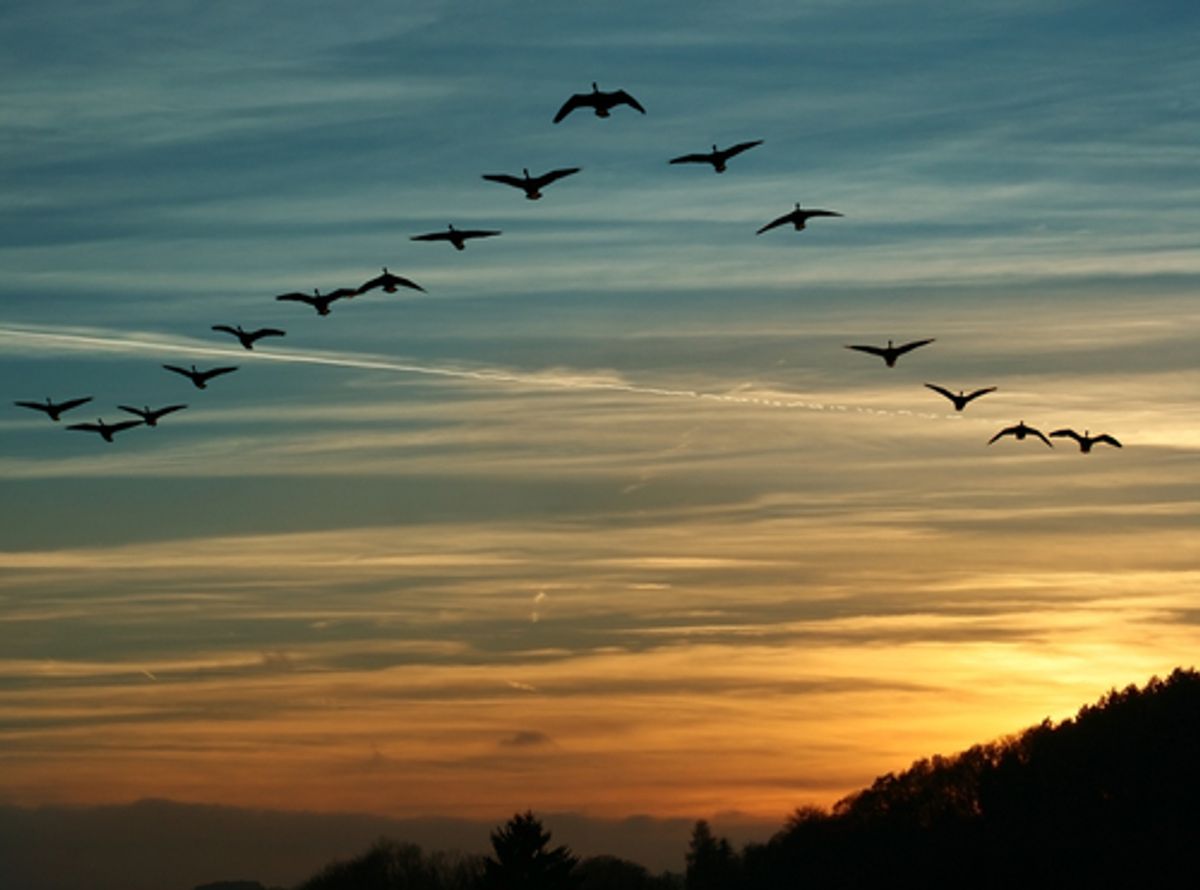 Secret weapon of birds and underdog hockey players alike, the flying V formation is believed to be ideal for energy and aerodynamics. A study published today in Nature not only confirms this idea, but it also fills in the blanks of how and why birds use it.

Most of what we know about the physics of flying comes from studying airplanes—birds push air down to stay aloft and glide through the air similarly. Wings also leave a vortex of air in their wake: air flowing off the top of the wingtips (upwash) creates lift, and air coming off the bottom (downwash) pushes down. “The simple rule is upwash is good air, and downwash is bad air,” says Steve Portugal, a comparative ecophysiologist at the Royal Veterinary College in Hatfield, UK, and a co-author of the new study.

Whether you’re a bird or a plane, you theoretically want to ride the small upwash part of the vortex. And the flying V configuration, the authors find, helps birds to do that.

Previously, scientists suspected that birds formed a V in flight because the shape allowed some of them to burn less energy. A 2001 study found that pelicans at the front of the V had faster heart rates—and probably used more energy—than those further back. For more this on other potential benefits of flying in a V, here’s a short video:

But how do birds behave within that configuration? Studies of flying birds in the wild are few and far between, and theoretical models of birds in flight only get you so far. So, Portugal and his colleagues teamed up with Waldrappteam, a conservation group that is reintroducing the critically endangered northern bald ibis (Geronticus eremita) to southern Europe.

If northern bald ibis hatchlings are born in captivity, they think of humans as their parents and grow to rely on humans for everything. Reintroducing them to the wild is tricky—to survive, they needed to learn their natural migration route. Waldrappteam teaches these routes.

Portugal and colleagues remotely observed birds that were born in a zoo in Vienna, Austria, on one such navigation lesson. First, the scientists developed data loggers, slightly smaller and lighter than an iPod, and strapped one to each bird. Then, over several weeks, the birds followed their human “parents” in a microlight parachute aircraft to spend their winter in Italy.

For two hours a day, the loggers collected GPS and acceleration data, telling the scientists where the birds were in formation and what they were doing. “We just deployed our technology and let them do whatever comes naturally,” says Portugal.

What comes naturally to birds actually requires great skill and precision. Trailing birds in the V follow the exact wingtip path of the bird ahead to catch their upwash. But, when directly behind another bird, they do the opposite and flap off beat, avoiding downwash. For various reasons, birds shuffle their positions in flight, changing their flapping rhythm in the process.

“Somehow they can sense things that we can’t,” says Portugal. “How fast the bird [in front] is flying, how fast it’s flapping, so they can flap at the best possible time.” Racing cyclists similarly know to position themselves behind a lead rider to avoid drag and save energy.

How do birds sense the when to flap to the beat? Bret Tobalske, a biologist who studies the biomechanics of flight at the University of Montana Flight Laboratory in Missoula, points out that the mechanism may come down to a combination of vision, whisker-like receptors on avian wingtips calledfiloplumes, and reflexive reaction pathways in the brain. Scientists just don't know.

The study is at the forefront of a scientific trend looking at animal movement in the natural environment. “It demonstrates a dramatic step forward in measuring the dynamics of animal locomotion in the wild,” says Tobalske. The ibis project is part of a series of animal movement studies—other projects include examining packs of wild African dogs, flocks of pigeons, and herds of sheep.