The right's "narrative skewing": How it dupes itself over Obamacare, Benghazi and Christie 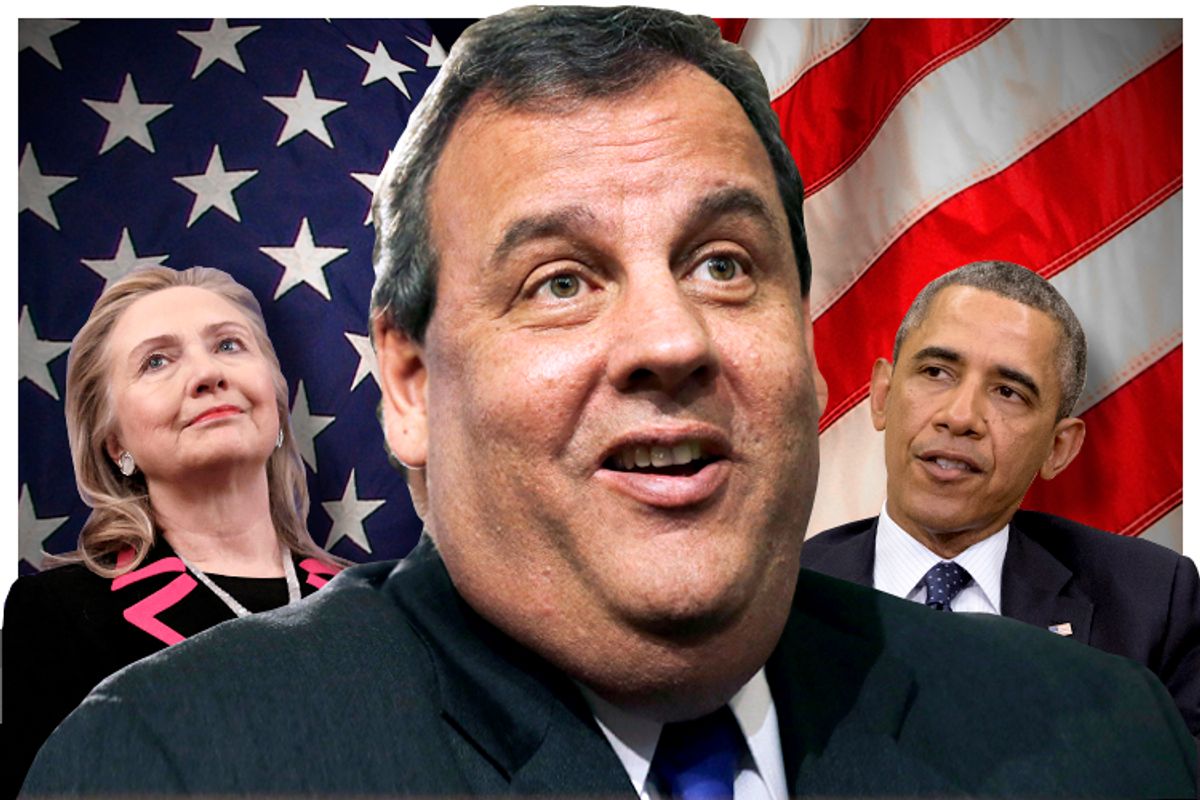 If I had to craft an irresponsibly optimistic prognosis for liberals looking ahead to 2014 and 2016, the short version would probably go something like this:

Forget about Obamacare's rocky rollout. The law has already hit escape velocity, and by November 2014 it will be a political wash and a bourgeoning success story. By 2016 it'll be a huge asset to Democrats. If Republicans don't figure out how to come to terms with its permanence, they will doom themselves for another four years. And even if they reach the acceptance stage, they'll have to grapple with the fact that their tireless campaign to destroy Hillary Clinton with ugly Benghazi conspiracy theories has already failed, and their own strongest candidate -- Chris Christie -- is about to be permanently crippled by the George Washington Bridge scandal.

Maybe that'll all turn out to be right. But I think it'd be a bad idea for liberals to saunter through the next year or three with such untempered expectations. Obamacare could easily be a political liability for Democrats in November, and even though I don't doubt its permanence -- or at least the permanence of its coverage guarantee -- it's possible that it'll never actually be a big political winner. By 2016 we could easily be on to something else. Benghazi conspiracy theories probably won't crawl out of the conservative fever swamp into the mainstream, but perhaps Benghazi itself will contribute to a line of broader questioning that ultimately damages Hillary's candidacy in a way that Bridgegate never does lasting damage to Christie.

Obviously I didn't pick these stories at random. They're the three biggest stories in American politics right now. And if American politics were in a healthy place, conservatives would have an equally restrained, but politically opposite assessment of the landscape. They'd consider the possibility that Obamacare might not be a complete political and policy disaster for Dems, or that Benghazi will never become the scandal they hoped it would, or that they have a 2016 candidate problem of their own.

But that's not where they are. It's too early in this political cycle -- and way too far out from 2016 -- for conservatives to be unskewing polls. Instead, they're undertaking an ambitious new venture in narrative skewing.

In the conservative information bubble all of these issues have been settled, and not in some anti-climactic middle zone between best- and worst-case scenarios. On the right Obamacare isn't just a political liability for Democrats and a substantive letdown for liberals. It's already collapsing under its own weight into what health wonks call an adverse selection death spiral. As luck would have it, this unrecoverable failure is happening just as Hillary Clinton has become unelectable and Christie is rising like a Phoenix from the ashes of Bridgegate.

On Tuesday morning, I published an article here arguing that, however the politics shake out, Obamacare has probably already reached the inflection point past which a death spiral is no longer possible. That the right's efforts to create a death spiral by sabotaging implementation efforts or discouraging enrollment had failed.

I was met with a barrage of negative feedback -- angry tweets and hate mail -- insisting not just that my analysis was mistaken but that the death spiral has already begun.

In the conservative bubble, the only thing diving toward impact faster than Obamacare is Hillary Clinton's expected presidential candidacy, which is apparently doomed by a Senate Intelligence Committee report's finding that the Benghazi attack could have been prevented.

This news came as a surprise to nobody who hasn't spent the past 15 months convincing themselves that Obama and Clinton allowed Americans to die rather than admit that an act of terrorism had occurred on their watch -- and then covered it up when the truth about the attack came out.

Which means conservatives were thrilled.

In Rubin's telling, this is "bridge gate times 1000 for Hillary" who'll never be able to turn the page, unlike Chris Christie, who already has.

I don't claim to be clairvoyant, but I think the likelihood that Obamacare is collapsing, Hillary Clinton is collapsing, and Chris Christie is brushing off Bridgegate, all at the same time, is about zero percent.

And yet, judging by the things they say and write, conservatives are certain that all three things are true.

This isn't an accident. It's an echo chamber effect. It's the outgrowth of GOP and conservative efforts to spin ambiguous and developing political stories into favorable realities. It's also a strategy that, like poll unskewing, entails misleading supporters about what's actually happening in the world, and having no good answers when things don't turn out as expected.