Trouble for Wal-Mart: Mega-giant accused by U.S. government of illegally firing workers across the country 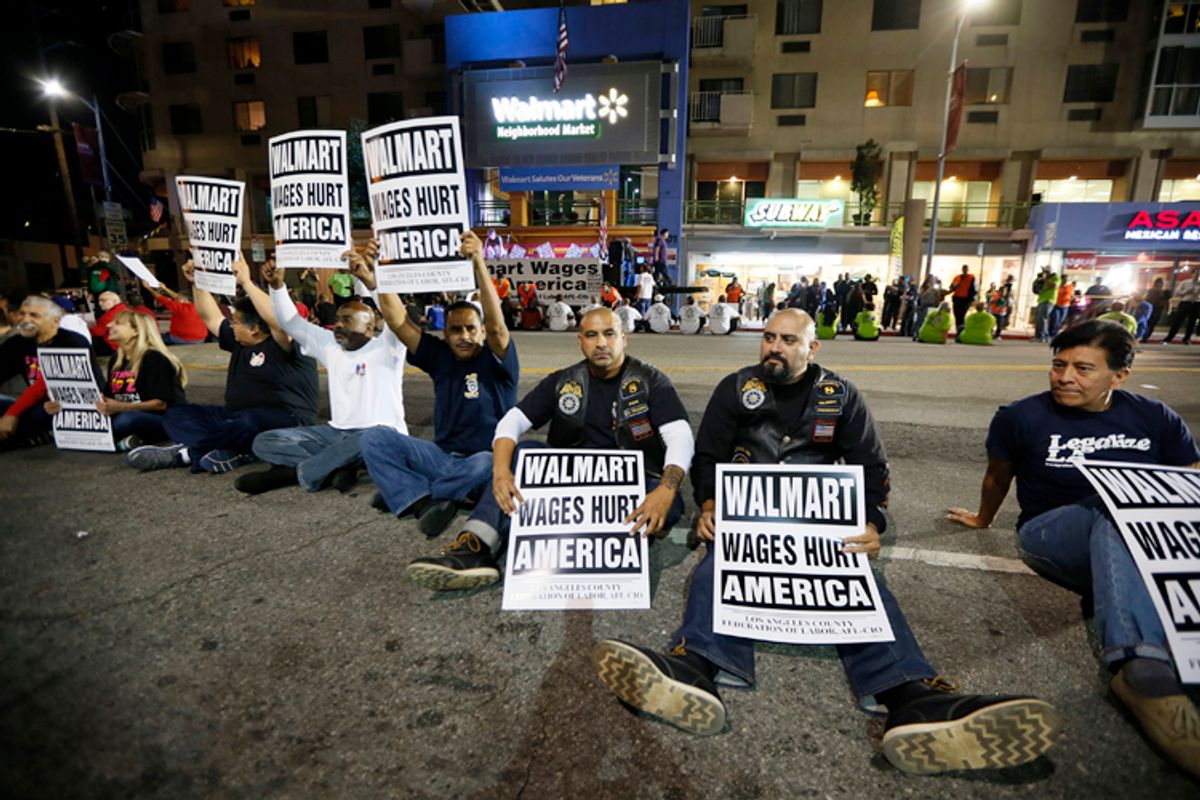 Wal-Mart illegally disciplined, threatened and surveilled workers – including unlawfully firing 19 people – according to a complaint released by the National Labor Relations Board Wednesday afternoon.

“Now the federal government is confirming what we already know,” fired worker Barbara Collins said in an emailed statement. “We have the right to speak out, and Walmart fired me and my coworkers illegally.” Collins is among 23 activists fired by the retail giant after joining a strike by the union-backed, non-union labor group OUR Walmart last June.

The NLRB complaint, similar to an indictment, lists incidents involving more than 60 workers in 34 states, as well as a Wal-Mart official’s warning on national television that, “If associates are scheduled to work on Black Friday, we expect them to show up and to do their job. And if they don’t, depending on the circumstances, there could be consequences.” It also cites the memo, read to employees by managers in various stores in February 2013, stating that “Should you participate in further union-orchestrated intermittent work stoppages that are part of a common plan or design to disrupt and confuse the Company’s business operations, you should expect that the Company will treat any such absence as it would any other unexcused absence.”

As I’ve reported, Wal-Mart’s effort to deter activism appear to have taken a toll: While organizers said 400-some employees joined a Black Friday walkout in November 2012, they’ve released no count for how many Wal-Mart employees were involved in the protests or civil disobedience on Black Friday 2013. Wednesday also brought the release, by Occupy Wall Street, of a cache of internal Wal-Mart documents regarding the company’s campaign against OUR Walmart. As reported by Gawker, these include a PowerPoint presentation on the “Duty of Loyalty” of managers to “Support Walmart’s position on how we treat people” and “Report union activity to the Labor Relations Hotline immediately.” As MSNBC reported, they also include a list of “Early Warning Signs” including workers “speaking negatively about wages and benefits” or “ceasing conversations when leadership approaches.” Wal-Mart spokesperson Kory Lundberg confirmed the documents’ authenticity to MSNBC’s Ned Resnikoff, and said they were “important to make sure that our associates are receiving accurate and timely information.”

Wal-Mart did not respond to Salon’s Wednesday inquiries. When asked about its firings of strikers, the company has denied that it broke the law, but not that it punished workers for not coming to work during the strikes. Spokesperson Brooke Buchanan told Salon in November that Wal-Mart has “a strict policy against … any kind of retaliation. But we also do have an attendance policy that we enforce.” While disciplining strikers for not working is generally illegal, Wal-Mart has implied that the work stoppages in question were legally unprotected intermittent strikes. Former NLRB chair Wilma Liebman said in June that “it would be hard on the facts so far” to sustain that argument.

The NLRB, which is charged with enforcing and interpreting private sector labor law, announced in November that it had found sufficient evidence to issue a complaint. Per its standard practice, the Labor Board held off on doing so while attempting to reach a settlement with the company. In a Wednesday statement, the NLRB said that settlement discussions “have not been successful …” The case now heads for a hearing before an NLRB administrative law judge, whose ruling could be appealed to the NLRB’s presidentially appointed members in Washington, whose ruling in turn could be appealed to federal court.

Labor advocates and activists have often questioned how well the pace and penalties of the Labor Board can avert or avenge employer crimes. An NLRB spokesperson did not respond to a Wednesday afternoon inquiry regarding whether the agency would seek a court injunction to expedite the case.

The NLRB complaint came one day after another legal challenge to Wal-Mart advanced toward trial. In a Tuesday afternoon ruling in the case Carrillo v. Schneider, federal Judge Christina Snyder rejected a motion for partial summary judgment from Wal-Mart and one of its warehouse operators, Schneider Logistics, which would have left them not liable for wage theft allegations from sub-contracted California warehouse workers. As I’ve reported, workers in the same warehouse who were directly employed by Schneider reached a $4.7 million settlement in a parallel case last month.

“Walmart controls every detail of its warehouse workers’ jobs and strictly monitors compliance with all its procedures,” plaintiff attorney Michael Rubin said in a statement celebrating the ruling. “The workers function as Walmart employees, and Walmart cannot avoid responsibility by pinning all blame on the underfunded subcontractors it uses to staff its warehouse.” Schneider declined to comment.