Their film challenges the narrative of Indonesia's government, which denies state murders during the Cold War 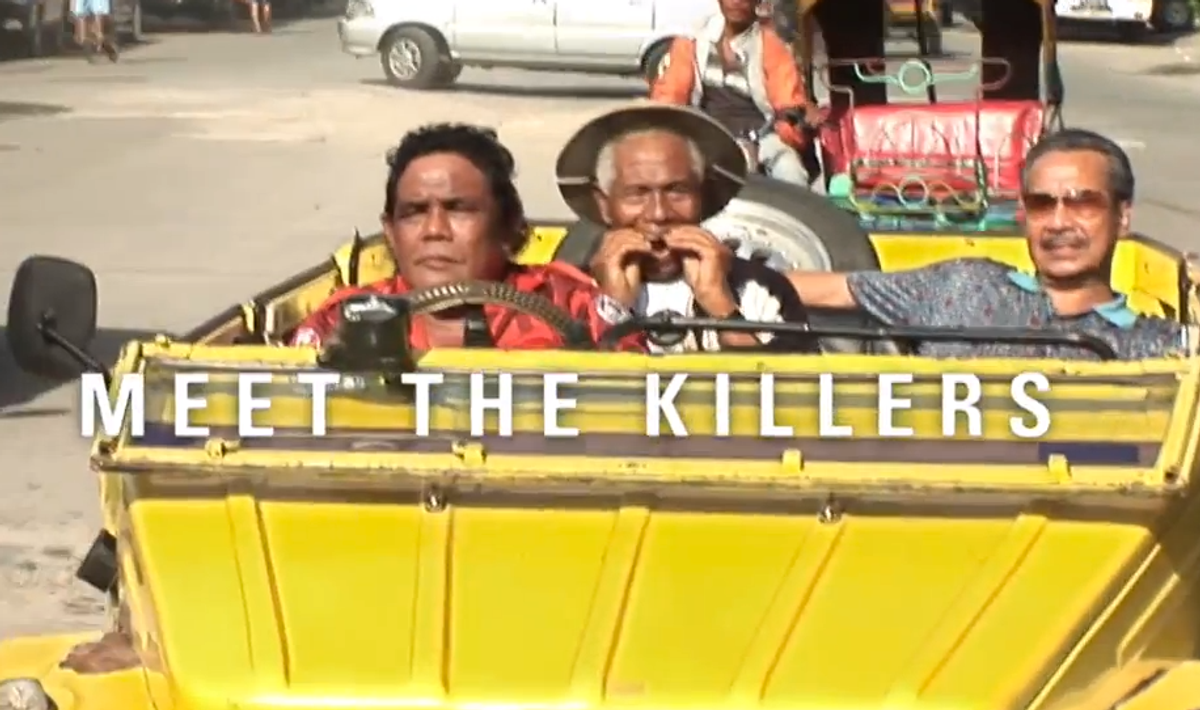 SINGAPORE — This year's Oscar nominations, the complete list of which was announced Thursday morning, predictably include “The Act of Killing” as a nominee for Best Documentary. It’s a harrowing film that exposes Indonesia’s darkest secret — one of the most horrific yet least acknowledged mass crimes of the Cold War.

Directed by Joshua Oppenheimer and executive produced by Errol Morris and Werner Herzog, the film is epic in its ambitions. It took more than seven years to complete, and would never have been possible without extensive work by dozens of Indonesians.

In February 2012, when production was wrapping up in Jakarta, the Indonesian crew sat down to discuss the threats they were likely to face after their work went public.

The film deals with the 1965-66 mass killings that followed a failed coup attempt. It features a cast of boastful mass murderers, who had been promoted from small time gangsters to death squad leaders in the aftermath of the coup attempt.

Trailer for "The Act of Killing."

Over the period of a year and with military support, the death squads murdered more than 1 million people — mainly alleged Communists, ethnic Chinese, and intellectuals they blamed for the failed coup. The film challenges the official narrative of Indonesia’s government, which still refuses to admit that the killings were state sponsored.

Working on such a sensitive story raises the stakes for locals, who typically face far more danger than foreigners who fly in to work with them. In the case of “The Act of Killing,” the crew had ample reason to fear retaliation.

“We don’t know what kind of harassment or danger might happen to us,” the anonymous Indonesian co-director told GlobalPost, in an exclusive English language interview. “There is fear and there is risk. There is a chance — were we named — that we’d face a legal problem or an extrajudicial problem, which is worse. We just didn’t know.”

They met with human rights groups, who told them that if they included their names in the credits, they could face intimidation, harassment and possibly a death made to look like an accident. The close links the documentary film reveals between those who took part in the killings and Indonesia’s current ruling elite raised the most concern. Led by the film’s Indonesian co-director, the crew of more than 60 decided they would keep their names out of the film’s credits.

That was no small disappointment. It meant no festival appearances, no awards — the documentary has won 35 awards to date — no recognition, nothing. But it was simply too dangerous to use their real names. That was the sacrifice they made for being part of a film that is both jaw-dropping and brutal in its portrayal of the country’s past.

The Indonesian co-director spent eight years working on the film and has also been responsible for its unofficial distribution in Indonesia. The film wasn’t submitted to the government’s censorship board, opting instead to rely on thousands of private and public screenings despite intimidation from paramilitary groups, local police and government officials.

Two screening organizers received death threats and last year the manager of a local newspaper was beaten for writing an article promoting “The Act of Killing.” At least three people were injured at a social gathering held by victims’ families in Yogyakarta in October. They were attacked by the Indonesian Anti-Communist Front (FAKI).

Despite intimidation, the film has created a new dialogue about Indonesia’s past. The co-director says victims’ families are meeting families of the perpetrators to talk about crimes their grandparents committed nearly 50 years ago. More people are openly discussing the killings. But as the film has snowballed its way around the world to critical acclaim, the government has remained silent.

“Government officials have no doubt seen the film, but haven’t reacted publicly,” documentary film director Daniel Ziv wrote in the Jakarta Post. “Contrary to the film’s important underlying message — that historical truths must be addressed for the sake of justice — Indonesia’s government seems content to bury its head in the sand.”

Andreas Harsono, Indonesia researcher for Human Rights Watch (HRW), says that the Indonesian crew knew well that “going to the wall” for their art was not an option in today’s political climate.

“The problem is that many of today's ruling elite members in Jakarta as well as in Indonesia's provincial capitals are the sons, the sons-in-law, the nephews or other relatives of the [1965] killers. Indonesia is basically ruled by the descendants of those killers,” he said.

The links stretch all the way to the current Indonesia president, Susilo Bambang Yudhoyono. SBY, as he’s known, is the son-in-law of the special forces commander in 1965-1966 who spearheaded massacres in Java and Bali, General Sarwo Edhie Wibowo. On his deathbed in 1989, Wibowo told a visiting parliamentary delegation that there were at least 3 million killed between 1965 and 1966.

“It's not surprising if Indonesians, who joined the film production, choose to remain anonymous,” Harsono says. “Anti-communist groups are still alive and powerful in Indonesia.”

Oppenheimer has been diligent about recognizing his crew ahead of the Oscars, in particular his anonymous co-director, and the sacrifice they made to get the story out despite working alongside men who had killed, quite literally, thousands of their fellow countrymen.

“The hardest thing I had to do was repress my emotion, because sometimes I felt so angry,” the co-director says, about working on the film. “How could these people brag about the mass killing they did? The more I was involved in this film the more I learned that if you want other people to learn from it and understand how these killings happened — what influenced them — then it was best to keep my feelings to myself.”

Oppenheimer says the crew endured a great deal of pain witnessing the gruesome details of the killings acted out, but it was an experience that brought the group together during the filming.

“We tried to love and support each other, and that is what made the long, dark journey bearable. We cried a lot, but we also laughed a lot; cared for each other; consoled each other through dark periods of nightmares and insomnia,” he says. “Some crew members chose to work for a couple years and then withdraw, but all remained close to the project, and care deeply for its dissemination and impact in Indonesia.”

The co-director says he will provide a reference letter to any of the anonymous crew members who request it from him, and that each is free to disclose what he or she feels safe disclosing.

“The decision whether or not to remain anonymous is theirs,” Oppenheimer says.

Most have kept their secret close to the family. The co-director has told only his direct family of his role in “The Act of Killing.” “I think the anonymity suits my personality. You could say that I am an asocial — not anti-social — person; I don’t like to be in the spotlight, I don’t have many friends either. I’m not the kind of person who likes to brag about my achievements.”

He says he may tune in from Indonesia to watch the live Academy Awards telecast next month, but isn’t too fussed. He’s much happier knowing that the film — which he won’t ever receive public credit for —  has encouraged Indonesians to finally talk about the darkest chapter in their history.

“If people change and people see things differently and people can see the history and identify clearly, more people will understand. That is more than any award [to me], any recognition… that is what I really had in mind when I joined the film project…. that it will change something.”