Up close at the Egyptian revolution 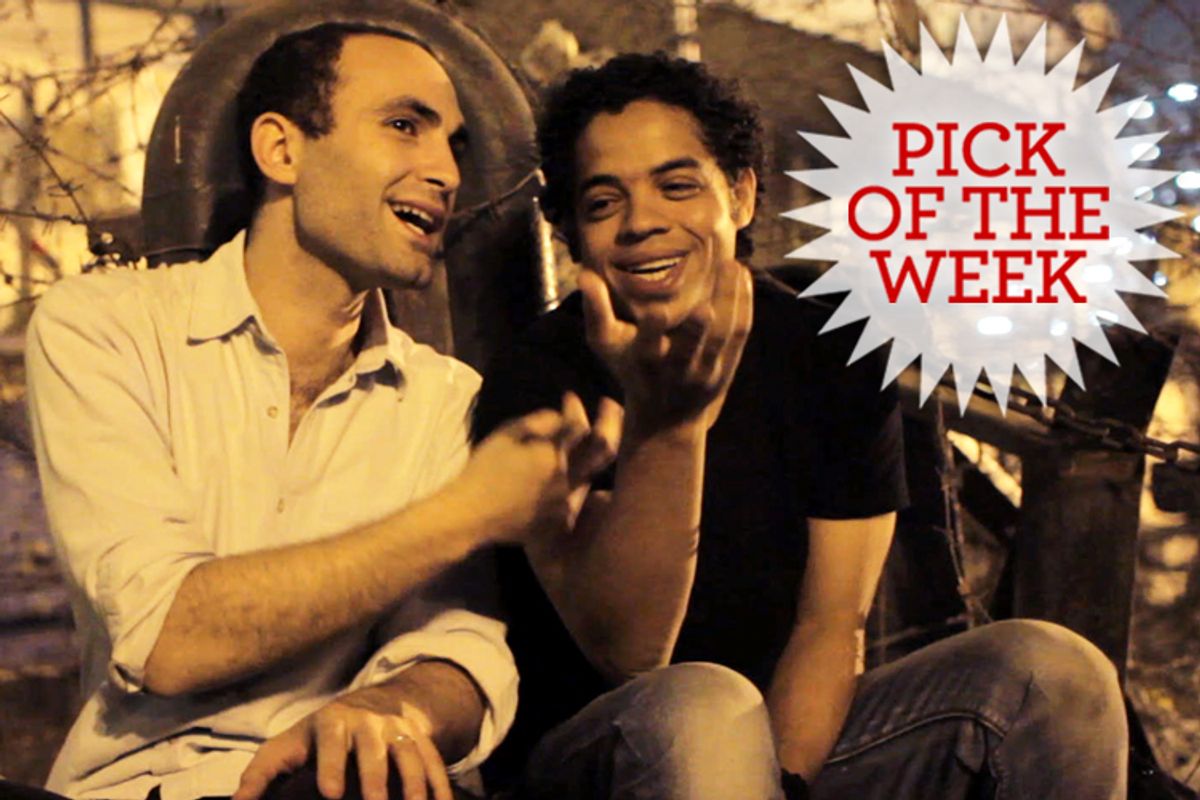 If journalism, when it does its job, is the first draft of history, then documentary film can often be the second, offering an invaluable opportunity to look back at the recent past from a slightly altered perspective. I can think of no better example in this decade than Arab-American filmmaker Jehane Noujaim’s “The Square,” which was just nominated for the documentary Oscar and is now available on Netflix and screening in several cities. It was shot in and around Cairo’s Tahrir Square during the last two years of discord, uprising, crackdown and revolution, and it’s a breathless, exciting and intellectually provocative film that will keep you on the edge of your seat. Through Noujaim’s camera, Tahrir Square no longer becomes a metaphor, a location-shoot for TV news reporters following some “Year of Living Dangerously” script or a trope used in arid theoretical discourses about the “Arab street.” It becomes a place, filled with people, a place that can be dangerous or jubilant, crowded or strangely empty, a place filled with celebration or prayer or enforced silence. It’s a place we come to know, which gives us a newly empowered relationship to Egypt’s recent history.

No, wait: I’m not claiming that spending two hours watching a documentary, even a really good one, gave me some profound insight into the bewildering and chaotic situation in Egypt over the past few years, when popular uprisings have brought down first dictator Hosni Mubarak and then elected Muslim Brotherhood President Mohamed Morsi, leaving the country in the grip of a brutal military dictatorship. Not when many Egyptians who lived through this period aren’t entirely sure how it all happened, what it all means and what the long-term consequences will be. But “The Square” did shift my perspective in subtle but crucial ways, bringing me face to face with the reality of the Egyptian revolutions as diverse and complicated phenomena, driven not by abstract social forces like “Islamism” and “secularism” but by large numbers of people who are connected to global culture and in many ways stand at its forefront. Tahrir Square is not some “other” space, filled with hordes of unthinking, undifferentiated masses. We are there, and it’s here, even if we don’t always see it that way.

Noujaim filmed a rough cut of “The Square” in 2011 and 2012, during and after the mass protests that lead to the ouster of Mubarak and the subsequent election of Morsi. Although we meet many different activists and citizens amid the discordant excitement of Cairo’s historic center, she focuses on three young men whose perspectives sometimes challenge each other and sometimes overlap. (A number of women appear in the film too, including the journalist Aida Kashef, and there absolutely were female activists, including ardent feminists, in Tahrir Square. For a variety of reasons, including but not limited to traditional Arab attitudes about gender and fears for their own safety, none of those women becomes a principal character.) One of the men is Khalid Abdalla, a handsome actor and filmmaker (he starred in “The Kite Runner”) who now lives in London and comes home to join the struggle for democracy. Another is a working-class revolutionary named Ahmed Hassan, hotheaded and idealistic, who sees a chance to bring down the country’s corrupt ruling elite. The third is Magdy Ashour, a loyal member of the Muslim Brotherhood who was imprisoned under Mubarak, but who comes across as a decent and thoughtful person rather than an intolerant zealot.

Noujaim actually screened the film last January at Sundance, before events compelled her to realize that the story wasn’t over. She went back to Egypt and shot through the collapse of the Morsi government last summer, and the worsening confrontations between the Muslim Brotherhood and the ruling military. When I first saw “The Square” at the New York Film Festival in September, some of the footage was less than three weeks old. Now the movie has reached its final form, but remains in some sense an unfinished work, as does the Egyptian revolution itself. In many ways it’s a document of immense hope and euphoria, and a tribute to the power of public space. Noujaim captures the street-level exhilaration of the moment when it was clear Mubarak would go, and makes clear that only in Tahrir Square could people as different as Abdalla, Hassan and Ashour have met, exchanged ideas respectfully and become sworn friends.

But “The Square” is also a movie with tones of cynicism and despair, a movie that demonstrates how revolutions turn sour, political power corrupts what it touches and ideology becomes deadly. When the Muslim Brotherhood capitalizes on the post-Mubarak chaos to claim and consolidate power, driving forward a narrow social vision that leaves many or most Egyptians behind, allies turn against each other and friendship turns to bitterness. Even Ashour, a true believer, is troubled and torn; he believes that what the Brotherhood wants is best for Egypt, but why do they have to subvert democracy and marginalize secular forces to get it?

“The Square” has the narrative force, the potent characterizations and even the colorful supporting cast of a feature film. It even has musical numbers, supplied by singer-songwriter Ramy Essam, who became the semi-official troubadour of the Tahrir Square resistance. It clearly does not have the kind of Hollywood ending we usually want from a fictional story, in which good triumphs over evil and the boy and girl find each other. (That requires identifying who is good and who evil, for one thing.) What it does have is a pulse-pounding historical immediacy that even Steven Spielberg couldn’t fake; in this age of digital fakery and post-everything doubt, you want to be cautious about words like “reality” and “authenticity,” but that’s what you’re getting here, in a triple mainline dose. This is politically engaged filmmaking on a high order, meant to spark not just thought and talk but action, and not only in Egypt. That’s a lot for a movie to ask of us, but this one’s so exciting it just might work.

“The Square” is now playing in Boston, Chicago, New York, San Francisco, Toronto and Washington, with other cities to follow. It’s also available on Netflix throughout the United States and Canada, and in several other nations.