12 great songs to get you through the year

From "January Wedding" on, these month-themed songs let you make a musical calendar 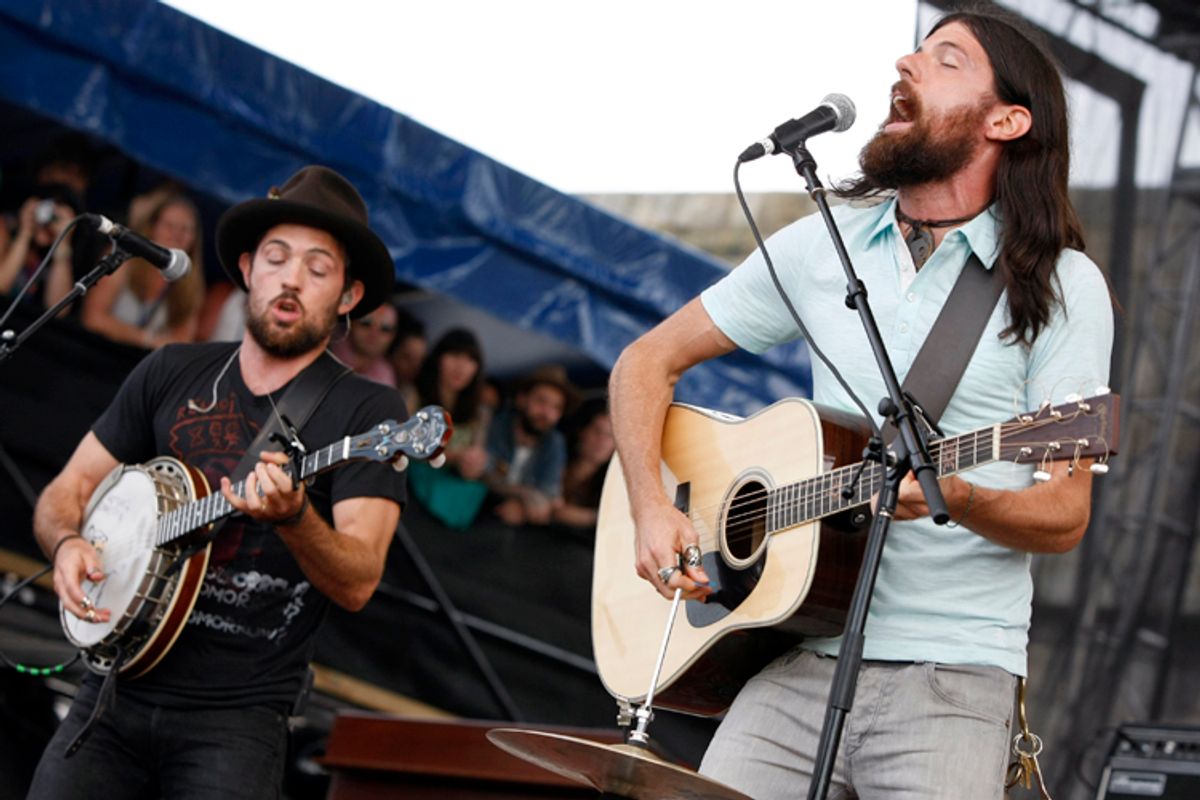 As we do every year, we're heading from January into February, and on toward spring and tax time and other seasonal repetitive annoyances. The passage of time is inevitable, but you can distract yourself from its depredations by cycling through the songs below, one for each month of the year you're going to have to get through like every other.

The Avett Brothers have kicked around alt country circles for a while, gamely hovering on the verge of next-big-thing. "January Wedding" is from their 2009 Rick Rubin-produced major label debut "I And Love and You." This live performance, complete with true believers in the audience letting loose with pig-calling yodels, nicely captures their charm. They're ragged hillbillies twanging away at sensitive indie pop, or maybe sensitive indie geniuses knee-deep in country. Either way, it's a good, simple marriage to start off the year.

Ritsu Katsumata was a childhood classical violin prodigy, but as an adult she decided she wanted to rock. So she entered the Seattle Bumbershoot Festival Jimi Hendrix Guitar Competition only to be disqualified in the finals for playing the wrong instrument. Undeterred, she formed her own power trio. You can hear Hendrix's psychedelic fire squalling through this 2004 track from Katsumata's album "February," both in the swaggering thrash of the very non-robotic "Robot Dance," and in the lyrical "February." As a bonus, this live electric violin tribute to Hendrix and Jimmy Page is pretty spectacular. Bleeding ears will be your Valentine.

A great classic Carter Family track, with the famous Carter harmonies and the even more famous rhythmically dexterous strum of Maybelle's guitar. The band seems indifferent to the exigencies of weather; a harsh March blast might trouble some, but the Carters trundle on with the same jaunty drone as ever, celebrating dour exuberance at the turning of the season. Keep on the sunny side, March.

There are lots of famous versions of this one, including the expansively cheesy 1955 Count Basie recording, a glorious take by Sarah Vaughan and Clifford Brown and Monk's own 1940s small group setting. But I think his solo piano version is my favorite. I'm not sure when this recording is from, but Monk sounds great; the smooth standard turned into a kind of strolling, staggering lurch through the streets, as if nostalgic recollection keeps getting interrupted by sudden downpours or sharp blows to the head. At a couple of points you can hear Monk muttering to himself as he thumps along, all spaces and hesitations and rhythmic confoundment, spring as vertigo.

Sometimes referred to as the grandfathers of grunge, Malfunkshun are best known as the band of Andrew Wood, who went on to form Mother Love Bone. This is a latter-day single from 2012, long after their '80s heyday, with singer Jeff Loftis replacing the sadly deceased Wood on vocals. "Rains of May" doesn't have the mud-slogging cool of the original line-up. Instead, it's as much hair-metal as grunge; decadent riff-heavy retro-rawk. Hold up your lighters and enjoy the fact that Malfunkshun appears to think that August is the month that comes after May.

Del was originally in Three 6 Mafia before he got religion; this one is from his 2007 album "Holy South: Kingdom Crunk." The sample voice repeating "Memphis in June" is sped up till it sounds like it's being sung by the Chipmunks, but I think it's from Nina Simone's famous performance of the Hoagy Carmichael tune, also titled "Memphis in June." That song's evocation of a pastoral, sleepy Southern summer is largely abandoned. Instead, lines about "Sweet oleander blowing perfume in the air everywhere" in the idiom of jazz-pop are replaced with name-checking of Al Green, Isaac Hayes and Martin Luther King in the idiom of crunked-out Christian hip-hop. Out with the old nostalgia, in with the new nostalgia, delivered with some righteous Southern summer sweat.

The 2010 video is all sparkly pop flash, electro-bleeps, preposterous costume changes (including an unfortunate appropriation of Native American headdress), hip-shimmying eroticism and enough rapidly sparkling lights to send the Founding Fathers and their assorted heirs into seizures. It's American independence as crass Vegas spectacle, which makes sense. Calvin Harris' goofily strutting bass-heavy remix is fun too, though it does lose something without the visuals. Who wants a 4th of July without fireworks?

From Julie London's 1956 "Calendar Girl," an album with a song for every month of the year (neat gimmick, huh?). "Time for August" is by Arthur Hamilton, who also wrote London's most famous track, "Cry Me a River." "Time for August" isn't as well known, but in its own way it may be as good; when London runs that sultry voice over lines like "I belong to the man of the man of the month club/and this July was only so-so," you don't know whether to laugh or fan yourself.  "It's just about time for August to come hot footin' it by" indeed.

This is an obvious choice, but how can you pass up the video, with its afterimages and psychedelic outfits for you, and you, and you as well? I love that, though the song is all about the clear cloudless skies of September, the joyful bopping is set resolutely in some darkened disco n-space; you feel like they're all thinking to themselves how happy they are that eventually they'll get to stop singing and go outside. Or possibly they're content to stay indoors just as long as they can look at Maurice White's mind-funkingly glorious pants.

Client, "The Chill of October"

Brit electronic retro-new wave band Client with a droning 2004 ode to a doomed relationship. The October chill here is resolutely metaphorical; this is music of sealed windows and closed office buildings, animatronic mannequins offering each other bare plastic branches. The mournful synth strings don't suggest whistling wind so much as a climate-control system loud enough that you can't hear whether there's any weather out there or not.

You never know what you'll run into while trying desperately to find a song about November that isn't "November Rain." Skull Force are techno punk weirdos with almost no online profile. "November Drone" is from an excellent EP called "Skull Funk;" the song starts out with a bilious bottom, moves into piercing crystal squeals, swings into broken, fractured funk and ends with someone leaving the laugh-track on too long. What any of this has to do with November (or for that matter with drones) is beyond me. Maybe they just got some good weed that month? Good a guess as any.

Merle Haggard, "If We Make It Through December"

Haggard's 1973 hit anti-Christmas song is about being unable to afford gifts for his daughter. "Got laid off down at the factory/ and their timing's not the greatest in the world," he sings, pulling out that last word like he's afraid to let go of the understatement and face what comes after it. The guitar at the end is determinedly cheerful, hoping for California and a new start to the new year before it runs down to the end.