How China could save Detroit

What xenophobic warnings about Chinese investment are missing: In ailing cities, it could make all the difference 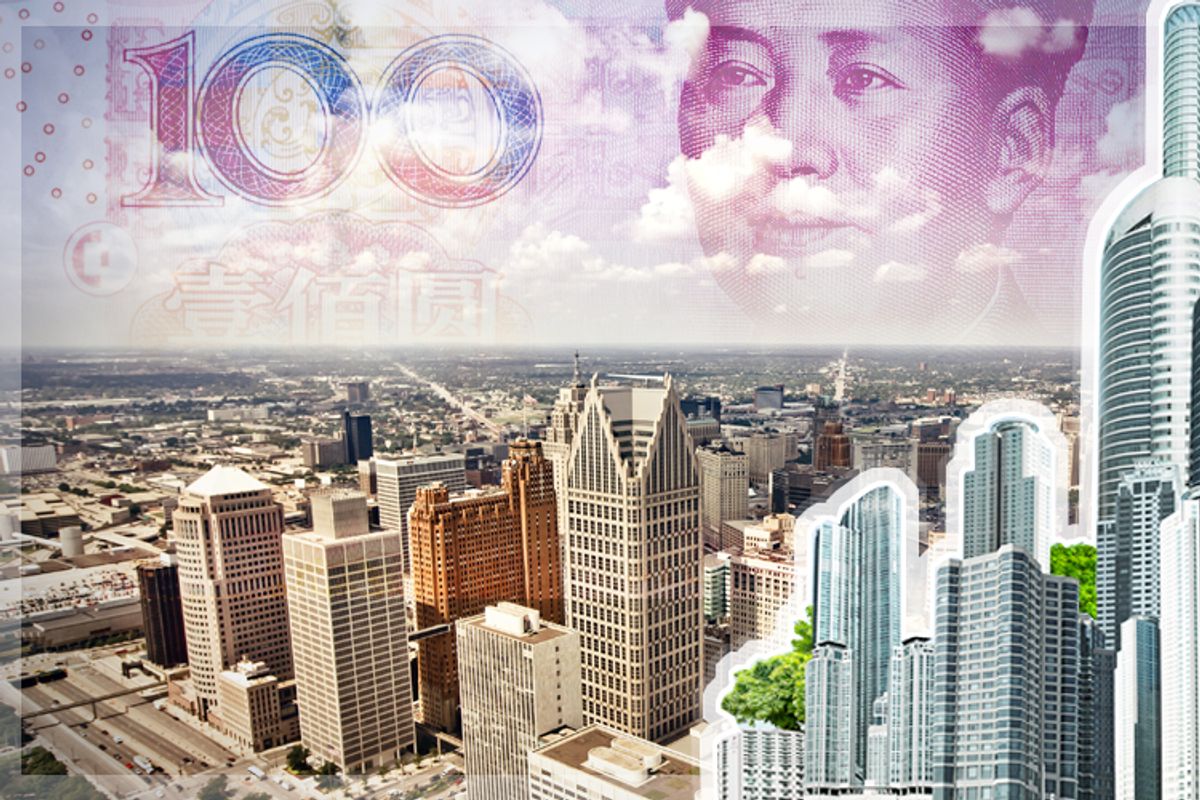 Incumbent Mike Bell may have lost the Toledo, Ohio, mayoral election in November, but he departs this month with a kind of celebrity in urban development circles. His success in luring Chinese investment to Toledo, 50 miles south of Detroit on Lake Erie and with a population of 280,000, remains the envy of larger American cities. A Chinese university will soon set up a branch downtown; rare Chinese antiques will be shown at the Toledo museum this year. A waterfront redevelopment project is underway, courtesy of Chinese capital.

It’s a sign of things to come. The American real estate industry has finally tapped the faucets of global finance, and projects are swimming in Chinese capital. According to data from Real Capital Analytics, the Chinese spent $4.3 billion on commercial property in the United States in 2013, more than in the previous five years combined. The country is easily the fastest-growing source of foreign direct investment in the U.S., and Boston Consulting Group has predicted that Chinese offshore assets will double over the next three years.

“The trend for Chinese companies going abroad has just started,” Zhang Luliang, the chairman of state-owned Greenland Holding Group Co., said in October, shortly after his company agreed to buy a 70 percent stake in Brooklyn’s Atlantic Yards project. That development, which will include 15 apartment buildings behind the 19,000-seat Barclay’s Center arena, is the biggest U.S. commercial real estate project yet to receive Chinese backing. But it is joined by similarly large deals in Oakland, Los Angeles and San Francisco. In the latter city, China’s Vanke Co. Ltd. agreed to partner on a $620 million apartment project with Tishman Speyer just 45 days after chairman Wang Shi saw it for the first time. Existing structures, like Manhattan’s GM Building, part of which was sold for $700 million to Soho China Ltd. this summer, have also proven popular.

Those projects have journalists and developers buzzing with excitement. And yet, they may represent as little as one third of what the Chinese are spending on U.S. property. The bulk of Chinese property investment is in residential real estate.

According to a survey by the National Association of Realtors, the Chinese spent more than $8 billion between March 2012 and March 2013 on U.S. homes, accounting for 12 percent of residential property sales to foreign buyers (up from 5 percent in 2009). They are now second only to Canadians among international buyers, having leapfrogged the U.K., India, Germany and Mexico in the past five years.

In some cases, the speculation has taken on comic proportions. In a Quartz piece from July, Gwynn Guilford quoted a Detroit-area broker named Caroline Chen:

“I have people calling and saying, ‘I’m serious—I wanna buy 100, 200 properties,’” she tells Quartz, noting that one of her colleagues recently sold 30 properties to a Chinese buyer. “They say ‘We don’t need to see them. Just pick the good ones.’”

For the most part, though, Chinese residential purchases have not made the news. Why? For one thing, the piecemeal nature of the trend does not make for big headlines. Also, as Thilo Hanemann, a research director at the Rhodium Group who studies China’s global capital flows, points out, “There’s no centralized database tracking these investments.” The NAR’s data derive from surveys, and home sales are much harder to track than multimillion-dollar commercial deals. “But,” Hanemann adds, “it’s fair to say we’re seeing the same trend for residential real estate.”

In some ways, these twin booms, in residential and commercial property, are two sides of the same coin: They may have common causes, or common investors, and sometimes occur in the same cities.

But their results will be different. While commercial investment opens up possibilities for new projects, residential speculation is more of a mixed bag. It will stabilize and stimulate housing markets in foreclosure-hit areas like Detroit and Southern California. But if international comparisons are any guide, it will also drive up prices in the country’s hotter urban areas.

As mayors and governors traveling to China incorporate real estate into the traditional economic development pitch, the federal government is trying to do the same. Gary Locke, the ambassador to China, held a forum in Beijing last month at the U.S. Embassy to promote Chinese investment in U.S. property. Interest in the EB-5 immigrant investor program has grown threefold since 2008, with the Chinese now making up 80 percent of applicants. There is perennial talk in Congress of instituting a “buy a house, get a visa” program, and some congressmen have proposed gutting or reforming the 1980 FIRPA law that levies a special tax on foreigners buying and selling U.S. property.

There’s no doubt that it would be a great thing to convince global homebuyers to shop in America’s depressed residential areas. “Obviously, the one-percenters were going to find homes in Beijing, London, New York,” says Milan Stevanovich, the executive director of the Detroit Chinese Business Association. “But for 90-some percent of middle-class and wealthy Chinese, Michigan offers an abundance of opportunities.”

Elsewhere, the trend could be less welcome, and more weird. In Miami, an incredible 90 percent of condos are sold to overseas buyers, prompting speculation that the city’s condo boom is functionally a money-laundering operation.

But the money from Chinese residential investors could prove, in the coming years, to be of another order of magnitude. Housing prices in Palo Alto, Calif., are rising faster than in London, which realtors say is thanks to surging interest (and all-cash bids) from Chinese buyers an ocean away. Others say that stratospheric housing prices in Vancouver, Canada, can be blamed on an investor program aimed at wealthy Chinese immigrants, and that foreign buyers should bear additional taxes. In Oct., 2012, a similar tax was implemented in Hong Kong, a city that has also held rising Chinese speculation accountable for high home prices.

It can be hard to separate price concerns from xenophobia, which suffused commentary around a 2012 plan to build a 300-acre Chinese-American development near Detroit. While word-of-mouth around Palo Alto is that many Chinese are purchasing investment properties, there’s little firm data. Many other Chinese buyers are immigrants, wealthier than their predecessors but no less desirous, or deserving, of the opportunity to raise a family in America. (NAR reports that two in five foreign buyers are acquiring a permanent residence.)

As the U.S. courts foreign buyers — and embraces a record influx from China — one wonders where those dollars will go. Detroit, with in-state tuition to the University of Michigan in mind? Or Manhattan and San Francisco, for a pied-à-terre bought, sight unseen? The median home price for Chinese buyers was $425,000, according to NAR, well above that of other foreign buyers and about twice the U.S. median, which seems to indicate that Chinese investors are interested in competitive rather than distressed housing markets, and that their reputation for fixer-uppers and distressed projects may not extend to residential purchases.

London, a guinea pig for the globalization of the real estate business, is having second thoughts. New research has shown that the “safe haven” effect — wealthy foreigners treating the city’s real estate as a secure but lucrative investment — means that housing prices are directly linked to political unrest around the world, even at the neighborhood level. Housing prices in London rose by 13 to 15 percent in 2013. “This is what happens,” Michael Goldfarb wrote in the New York Times, “when property in your city becomes a global reserve currency.” The conservative government is now considering extending a large capital gains tax (à la Hong Kong) to foreign buyers — the exact measure that Texas Rep. Kevin Brady is trying to repeal in the U.S.

Economists, financiers and politicians tend to look kindly on wealthy foreigners buying apartments – if only every billionaire on Earth could live in New York! – but it doesn’t necessarily make for a healthy city. In the extreme cases, it may actually make for an empty city.