No, Hollywood's not post-queer: The complicated politics of coming out

Ian McKellen may have casually outed some "Hobbit" cast-mates, but that doesn't mean being an out celebrity is easy 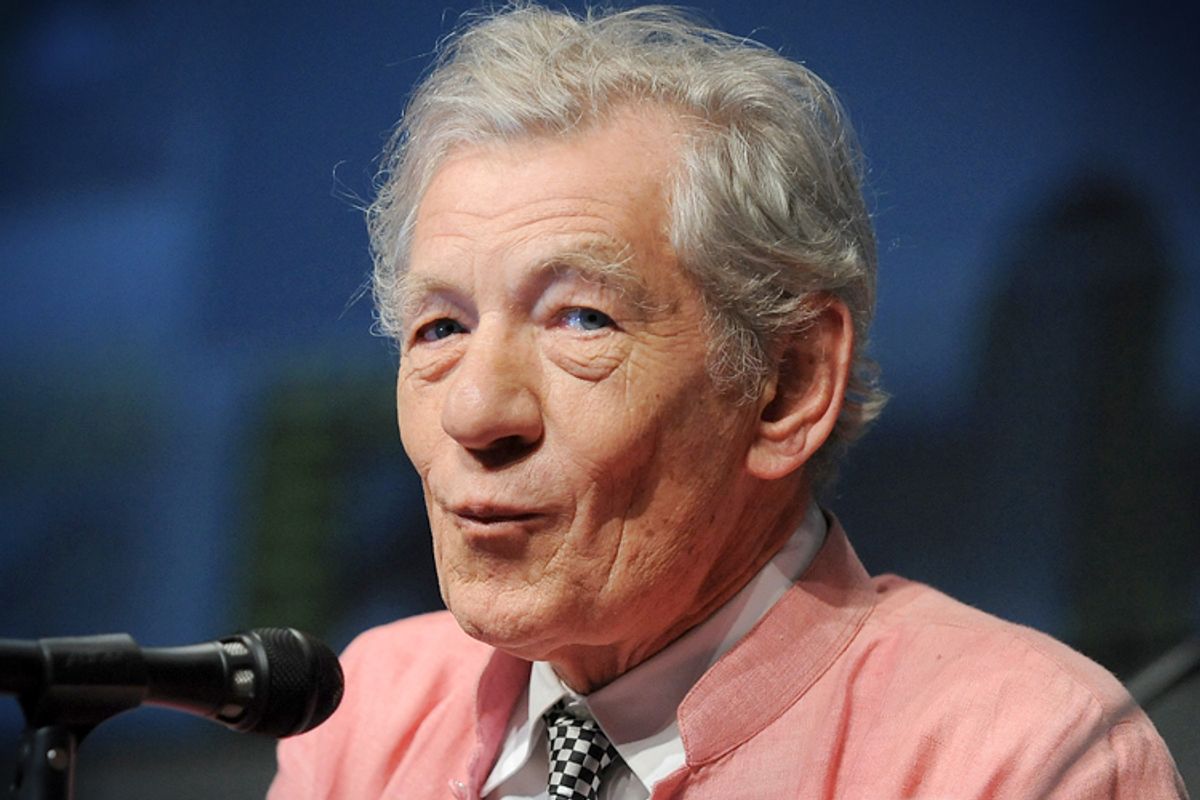 2014 is quickly shaping up to be the Year of Celebrity Outings. In the first week of the new year, as the Internet was abuzz over rumors about Republican politician Aaron Schock’s sexuality, Sir Ian McKellen belatedly upped the ante. An interview from a 2012 press junket resurfaced last week, one in which the British thespian casually outed half of his “Hobbit” castmates. Fielding a question on whether it’s getting better for gay actors in Hollywood, McKellen went right to naming names. “Just look only how many openly gay actors in the ‘Hobbit’ with were: two of the dwarves, to Luke Evans, Stephen Fry, Lee Pace,” McKellen said, in a very rough translation from the original German.

The problem is that only one of those actors is actually out: Stephen Fry. Lee Pace has never commented on his sexuality one way or the other. Queerty describes Pace as “not really out.” On Pace’s sexuality, Queerty’s Daniel Villarreal asked, “If you’re famous, like boys and live openly gay in your personal life, but don’t announce your gayness on a magazine cover or talk show, does that mean you’re closeted?” However, Luke Evans is an odder case, an actor who has been “on-again, off-again gay.” Evans described himself as a “gay man” in a 2002 profile in The Advocate, and in 2004, he told Gaydar Nation what he looks for in gay porn stars: “An enormous big fat cock!” Now Evans is straight with a girlfriend, at least in the press.

The gulf of difference between Lee Pace and Luke Evans shows the changing nature of the closet in 2014. Throughout his career, Pace has been as out as you can be without ever saying it, showing a consistent interest in queer projects. Lee Pace’s breakout role was playing a transgender nightclub singer in “Soldier’s Girl.” Since then, he appeared in Tom Ford’s “A Single Man” (based on the landmark gay novel), “Infamous” (about the making of Truman Capote’s "In Cold Blood") and “Pushing Daisies,” executive produced by the openly gay Bryan Fuller. His career is similar to that of Zachary Quinto, a character actor similarly attracted to smaller projects. Quinto came out in 2012, and although it may have surprised some to learn their favorite Vulcan was gay, it didn’t hurt his career. Quinto’s coming out didn’t even make the headline in his own profile. It wasn’t considered a lead.

However, a Daily Beast article from 2011 looked at the difference between the Zachary Quintos and Lee Paces and guys like Luke Evans. Evans recently starred in "Fast & Furious 6" and is the face of the rebooted "Crow" franchise, a rising star in an action genre in which gay actors are untested. “Do you want a career or do you want to be out?” The Daily Beast’s Tricia Romano asked. “It’s, what kind of career do you want? If you are open, you might not become the next Russell Crowe, but you could have a more interesting path. Quinto and Evans are, in a way, taking a parallel ride; but while the former might be seen more as a character actor; the latter, as [Paris Barclay of The Advocate] put it, ‘might be a Captain Kirk,’ and as he noted: ‘There are different dollar signs on different kinds of roles.’”

With Tom Daley and Maria Bello’s double coming out at the end of 2013, it’s easy to wax lyrical about the changing nature of coming out in Hollywood and say that it’s no longer a big deal. When you see a tidal wave of positive publicity from major media, the feeling is that our media culture is post-queer. However, Evans shows that gay actors still face obstacles to coming out, like a homophobic industry mindset that believes gay leads only have worth if they stay in the closet. If not, every gay actor would be out, and Rupert Everett wouldn’t be openly encouraging young queer men who want a career to stay in the closet. Just because it’s getting better for some doesn’t mean it’s great for everyone.

If you need proof, ask Aaron Rodgers. The Green Bay Packers quarterback has been inundated with rumors about his relationship with Kevin Lanflisi, his former personal assistant and roommate. The speculation is based on a series of photographs of and tweets between the two from recent years, which allegedly surfaced after the pair broke up. After NBA star Jason Brooks opened up about his sexuality this spring, three NFL players were expected to come out over the summer. Rodgers was speculated to be one of them, but this never transpired. As the story goes, this drove a wedge between Rodgers and Lanflisi, who wanted Rodgers to go public with the truth about his life. On September 13, Lanflisi tweeted, “Silence always comes with an expiration date.”

I don’t know if Rodgers is gay. However, I'm sure that speculating about his sexuality is a diverting way to spend your time on the Internet, putting together puzzle pieces that don’t quite fit to pretend you’ve built a castle. The problem is that it’s not a game for Aaron Rodgers. It’s his life. Rodgers isn’t just a celebrity; he’s a person with his own agenda. According to OutSports, Mr. Rodgers’ brother is an anti-gay activist, and his father was none too pleased with allegations around his son’s sexuality, allegedly calling the rumors “disgusting.” In addition to roadblocks in his family life, Aaron Rodgers faces a league that’s extremely hostile to even the idea of homosexuality. Miami Dolphins player Jonathan Martin left the team in 2012 following a series of abusive text messages from a teammate about his race and perceived sexuality, and Vikings kicker Chris Kluwe recently alleged that he lost his job over his outspoken support of LGBT rights.

Outing doesn’t fix the underlying homophobia and the culture of fear that keeps people in the closet in the first place. As Cyd Zeigler argued in OutSports, outing helps absolutely no one. Honesty is only beneficial when you’re ready to live the truth. “We don't know of a single male athlete in the United States who has come out publicly on his own accord and suffered overall negative consequences,” Zeigler wrote. “However, the two male athletes we know were outed -- football players Greg Congdon and Jamie Kuntz -- were both removed from their teams and suffered. Outing is damaging; Convincing someone to come out publicly (which we have done many times) can be powerful.” According to Zeigler, all Rodgers’ public shaming does is make it harder for other players toying with coming out. It makes the problem worse.

If there’s any lesson that Luke Evans and Lee Pace can learn from the Aaron Rodgers controversy, it’s that every person needs to decide what being out means to them -- and what the right time for the truth is. Harvey Milk once encouraged every queer person to come out, in order to show that we’re here. We exist. We are your neighbors, your friends and your football-playing sons. However, the only way to make being out powerful is to let everyone define that for themselves. As Zeigler suggested, we need to focus on making our culture more safe for everyone to be out in the first place, a place where no one can be fired for supporting equality, and dwarves can be as out and proud as they like.