How the young elite rise in Washington, D.C. 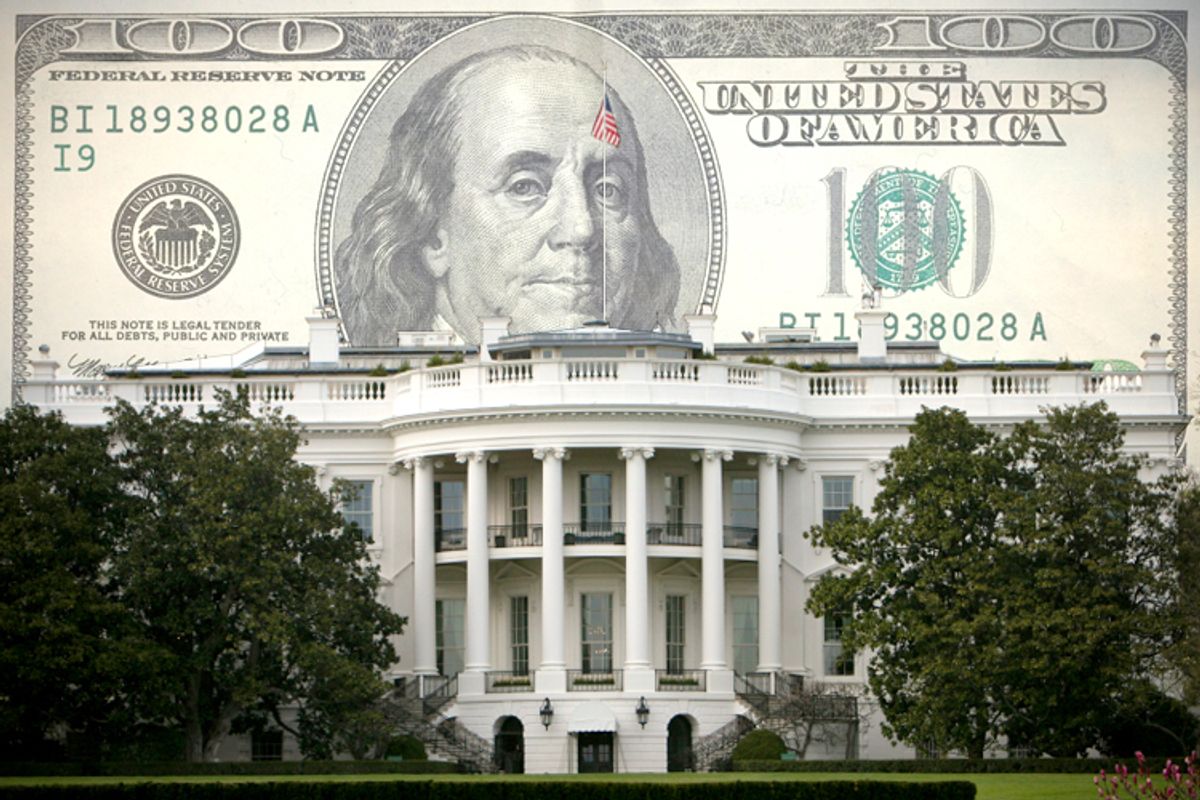 What do you call an employer that refuses to pay its workers any salary at all?  Answer:  The White House.

President Barack Obama has called for an increase in the U.S. minimum wage. And yet his administration expects hundreds of young people each year to work at the White House for an hourly wage of zero.

According to a White House website, White House interns are expected to work “at least Monday-Friday, 9 am-6pm.”  Nice touch — “at least.”

In return for a full week’s worth of work and possible overtime, the White House provides its interns with no pay and no housing help.  The latter is significant, because the Washington, D.C., metro area has among the highest costs in the U.S.

The problem with the unpaid internship program, which Obama inherited from previous Oval Officers and which has continued, is not sweatshop exploitation -- it’s blatant class discrimination.

While colleges and other institutions sometimes fund unpaid internships, their major beneficiaries are rich kids. According to BuzzFeed:

Interns living in Washington, one of America’s most expensive cities, told BuzzFeed they wouldn’t be able to do it without serious financial help from the home front.

One intern working in the executive branch on foreign policy and law-related issues said he pays his bills “through a mix of financial aid and parental support.” (He asked to remain anonymous in case his candor would upset his bosses.) The intern, a 24-year-old third-year law student at UCLA — a school that offers a small stipend to students with public service internships — says he’s enjoying his time in D.C. thanks in large part to checks from his parents.

It gets worse. In many cases, the interns are not only unpaid, but they (or rather their rich parents) are actually subsidizing the White House.

CNN reported on one former White House intern who recounted the costs she paid, in addition to foregone salary income:

As Emily Jane Fox, a former unpaid White House intern herself, reports for CNNMoney, the White House is coming under pressure from groups like the Fair Pay Campaign to pay the college students who work 9-to-6 jobs (at least) for no money.

Fox told me it cost her "a couple thousand dollars" to take a White House internship in 2010.

Plus: She had to buy a suit.

The Obama administration, like previous administrations, allows rich parents in effect to buy résumé-enhancing jobs in the public sector for their upper-class offspring. The sale of public offices to rich families was one of the abuses of the Ancien Régime that helped to inspire the French Revolution. Like that corrupt premodern practice, unpaid internships are an inherently aristocratic institution. If you are in your late teens or early twenties, and you don’t have a personal trust fund or rich parents who can fund your living expenses as an unpaid intern in Washington, D.C., New York or San Francisco, then you are out of luck.

When I say rich kids, I mean really rich kids. We’re talking One Percenters. Even many upper-middle-class parents with professional jobs might not be able to subsidize children with unpaid internships at the White House, Washington think tanks or New York publications and media enterprises.

Because my own parents were not rich, in my twenties I could never have afforded a job as an unpaid or poorly-paid intern at any of the magazines for which I once worked in my thirties as a writer or editor — the New Republic, Harper’s Magazine or the New Yorker.  Indeed, it was my unscientific impression that the interns at these publications were much richer, in their twenties, thanks to family wealth, than most of the middle-aged editors and writers. An intern at one magazine had a party for the magazine staff at her two-story Midtown Manhattan apartment.

Unpaid internships have the effect, if not the intent, of providing the children of the super-rich with major advantages over the children of the lower 99 percent in the job market after college. Imagine what a benefit a White House internship is on a résumé. Too bad that benefit is not available to poor, working-class, middle-class or even upper-middle-class Americans, unless they are lucky enough to find an outside sponsor to pay the wages that the Obama administration refuses to pay.

It’s bad enough that elite institutions like magazines and think tanks ration opportunity by discriminating in favor of the sons and daughters of the One Percent by means of unpaid internships. A president who engages in this practice sends a signal to all other employers in the United States: As long as you call a job an “internship” you are free to discriminate against the majority of Americans who were not born into the upper class.

Mikey Franklin, one of the founders of the Fair Pay Campaign, has called on the White House to end the unpaid internship program:

"If we can get President Obama to start paying his interns, other democrats on Capitol Hill and liberal institutions will have to follow suit," Franklin said. If all goes according to plan, the Fair Campaign has a good chance of success in this regard. As the White House continues to work to raise the minimum wage, Franklin is hoping to tap into the political momentum of this cause to draw attention to the hypocrisy of fighting for a livable wage while hundreds of your employees are completely unpaid.

In the Washington Post back in August 2013, a conservative named Ed Rogers denounced the idea of paying unpaid interns even a minimum wage:

It is ironic on many fronts that some (but surely not all) Obama White House interns are agitating to get paid. Never mind the fact that these interns signed up knowing exactly what the terms were. The point is, they want more and they expect the government to give it to them. Typical. What happens to people when they get in close proximity to a government payroll? Are President Obama’s pro-entitlement policies so powerful they’re affecting even the White House’s own interns?

If you don’t think the opportunity is worth some sacrifice or a little planning to be able to scrape by for a while – even if you have to sleep on a friend’s couch – then you should quit. Go be an intern at your local “Occupy” chapter, put that on your résumé, and see how that works out for you.

Even if you sleep on a friend’s couch, how is a non-rich unpaid White House intern supposed to be able to afford to eat? By begging for food from friends? By going to soup kitchens? By working only a few hours part-time on weekends (the White House says its interns are expected to work five full weekdays and maybe more)?

When I read the Ed Rogers op-ed in the Washington Post, I suspected that it was actually a parody written by a progressive. Ed Rogers sounds suspiciously like “Ed Anger,” the parody-conservative who used to denounce Michael Jackson for turning America’s children into sissies in the pages of the tabloid Weekly World News back in the Reagan era and published the classic "Let’s Pave the Stupid Rainforests & Give School Teachers Stun Guns: And Other Ways to Save America" (1996).

It appears, however, that Ed Rogers is real. He is a Republican lobbyist in Washington, D.C., the co-founder of the BGR Group with former Mississippi Governor Haley Barbour, and he moonlights as a liberal-bashing right-wing pundit with his contributions to the Washington Post’s “Postpartisan” commentary section. This is encouraging news to those of us who would not mind if the Post, under new owner Jeff Bezos, were to morph even further into the Weekly World News: “Liberal Space Aliens Ate Obama’s Brain.”

In any event, Rogers undermines his own case by pointing out what an important career credential a White House internship could be:

And by the way, a White House internship is a distinct honor. It is a credential that will be part of your pitch to the rest of the world for the rest of your life.

The figure assumes Obama would pay his interns $9 an hour, the number he suggested the minimum wage should be raised to during his State of the Union address in January.

The White House has said it employs more than 300 interns each year, with 150 this summer alone, and "more than 100" in the fall and spring semesters. Each intern is expected to work 45 hours per week.

We assumed the White House would be paying 125 interns at $9 per hour for 50 weeks per year.

The figure can be taken two ways. On the one hand, it means the White House is getting $2.5 million of free work each year.

While $2.5 million may sound like a lot, as Emily Jane Fox points out it is the equivalent of the cost of White House tours. Ask any employer you know whether hiring 300 workers — not 30 workers, 300! — at a $9 minimum wage for a mere $2.5 million is exorbitant.

Sometimes there are arguments in which only one side can make a case. This is one. There is simply no argument, other than the nepotistic self-interest of the hereditary upper class in America, for allowing unpaid internships of any kind, anywhere.

And it is hypocrisy of the purest kind for President Barack Obama to call for private-sector employers to pay a higher minimum wage, while he pays 300 workers a year each a minimum wage of zero.

The White House internship program should stop being an exclusive club for the pampered brats of the upper class to which middle-class and working-class young Americans need not apply. President Obama should practice what he preaches by paying all of his employees at least a minimum wage.