"Orfeo": Artist or terrorist -- is there a difference? 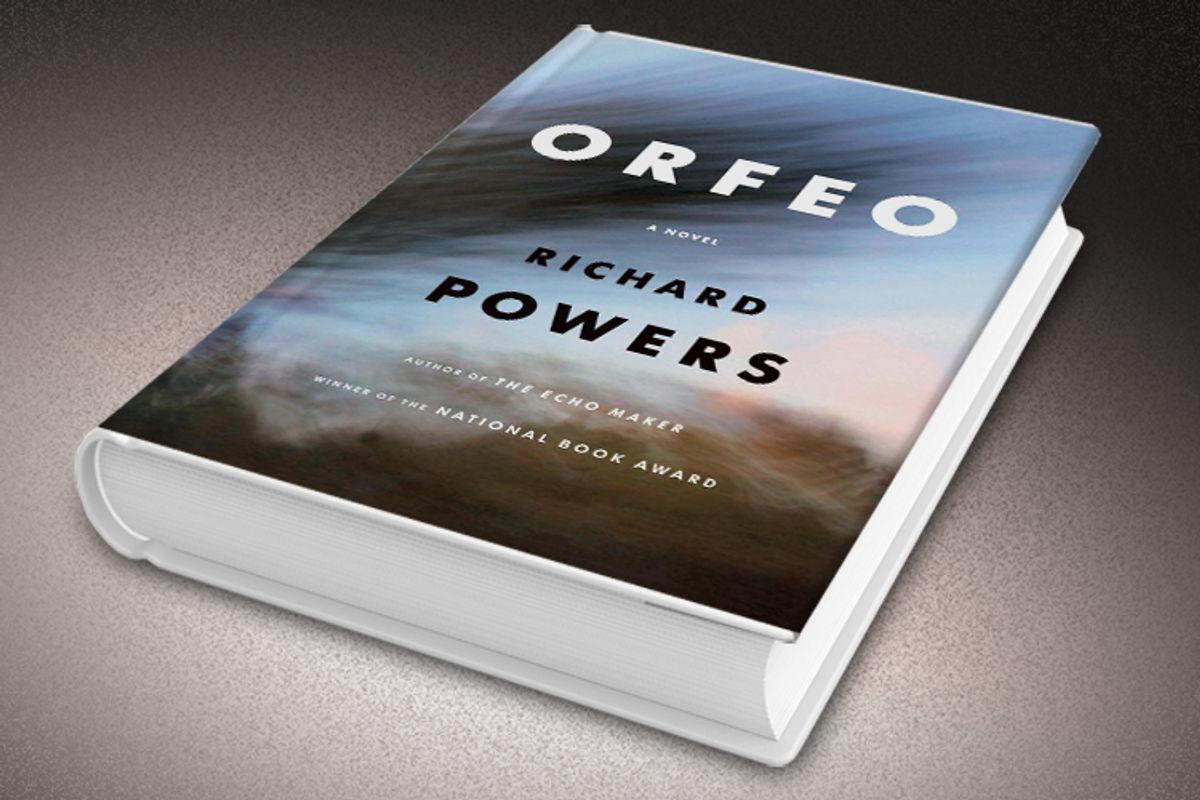 Peter Els, the main character in Richard Powers' new novel, "Orfeo," has spent most of his life composing music that hardly anyone has heard. As an undergraduate, studying chemistry at a Midwestern university, he was redirected (or was it led astray?) by his first love, a classical cellist, who told him, "Pieces pour out of you when you snap your fingers. That's called a vocation. You don't get a choice." Now in his 70s, a retired music professor and one-time avant-garde composer tinkering with mail-ordered lab equipment in rural Pennsylvania, Peter wonders if he hasn't "missed his calling," and "the age's real creative venture": biotechnology and genetic engineering.

"Orfeo" begins with the death of Peter's beloved dog and a visit from emergency services, called in by the bereft pet owner in a moment of confusion. The two officers get an eyeful of Peter's home lab, and a few idle comments made by the "quiet older bohemian in the American Craftsman" spook them. The next day, Peter drives to the park for a morning run and comes back to yellow police tape and guys in hazmat suits disassembling and carting off the contents of his house to be scrutinized by Homeland Security. For reasons not entirely clear until (maybe) much later in the novel, Peter decides to get back in his car and go on the lam, visiting various important people from his past, rather than turning himself in and trying to straighten things out.

This sort of retrospective road trip is far more commonplace among the elderly characters in books and movies than it seems to be among the actually old, but such cavils cannot persist against the abundant charms of "Orfeo" for long. Powers, who once worked as a computer programmer, has specialized in a symphonic form of fiction; an early novel, "Galatea 2.2" juxtaposed the creation of an artificial intelligence with the imaginative insight of both novelists and lovers, while another, "The Goldbug Variations," was underpinned by an extended conceit linking the fractalish iterations of Bach's harpsichord exercise with the ever-mutating code strands of DNA. Storytelling hasn't been Powers' strong suit in the past, but the whirling intellectual energy of his novels has won him many admirers and one National Book Award for fiction ("The Echo Maker").

With "Orfeo," Powers has conclusively cracked the plot problem, fueling the novel with both the question of Peter's future and the enigma of his past: Is he or isn't he a terrorist? Creating a loop in time -- by "predicting" the past and "recollecting" the future -- is one of Peter's persistent fixations. His model is the octave, the interval, universal to all musical systems, that creates a sense of wholeness or completion even his poor deceased pooch could recognize and appreciate: "other species heard the pitches double back on themselves, like a color wheel." Late in life, Peter finds himself in pursuit of "something in music beyond taste, built into the evolved brain." Or, to put it another way, he's trying to answer the question, "How did music trick the body into thinking it had a soul?"

Maybe the answer to this question is all Peter ever wanted, but he's a man fond of summing up his life in terms of a single desire, and the lineaments of that ungratified desire keep shifting. We're told that the sole thing he craved was to "give back something as fine as he'd been given" or to have "a room of grateful listeners" or to "scribble down the tune that would raise everyone he knew from the dead and make them laugh with remembering" or for "music to be the antidote to the familiar" or to "tunnel into forever through the wall of Now." "You're the only person I've ever met who wants more than I do," says his intermittent friend and occasional collaborator, Richard. "Not afraid to torch your entire life. Writing for no one."

That entire life includes not just chemistry but a family: a wife and daughter exasperated and finally driven off by Peter's tendency to disappear into experimental projects that consume a year's worth of work only to evaporate in a single day or performances with "more people on stage than in the audience." The central subject of "Orfeo" is the now-exhausted course of modernism in music, a century's worth of "runaway bonfire," in which composers "burned through all available innovations, each more fleeting than the last. The accelerating vehicle would one day have to hit the wall, and it was Els' luck to be alive at the moment of the smash-up." As a young man at the University of Illinois at Urbana-Champaign during the 1960s, a hotbed of new music, Peter meets Richard at John Cage's cacophonous happening, the Musicircus. The two young firebrands go on to produce a one-day piece in a New York warehouse, then quarrel, then reconcile and collaborate again on an opera about the siege of Munster in 1534, an "ecstatic uprising gone wrong," much like their own.

Now Richard tutors students who write the Neo-romantic music he once -- but no longer -- scorned, and he marvels at the cycles of taste, how absolute they appear and how quickly they crumble. This new generation can't even claim "the pleasure of creative destruction. Nothing to break anymore. Everything already broken and glued back together in a mosaic of pretty bits, too many times to count." Not only is a true avant-garde no longer possible, but technology has made so much music available that, realistically, most works stand to be "heard by almost no one," a realization driven home as Peter watches a jogger flick through track after track on her iPod.

What does it mean to dedicate your life's work to an aesthetic that becomes obsolete (even to yourself), to sacrifice your personal relationships to it, to create in a vacuum, to make art that no one will ever see or hear? Is it worth it? The question applies to more than just experimental composers. "Of the making of many musics," Peter thinks to himself, "there is no end," but the original line, from Ecclesiastes, is "of making many books there is no end." To write literary fiction in an age of what Peter calls "chronic focal difficulty" and the deluge of self-publishing is to wonder if there's a purpose in writing books that may never be read. Even the audience for a writer as accomplished, renowned and rewarding as Powers can be dispiritingly small. And yet, just as Peter reconsiders the merits of musical beauty, Powers, with "Orfeo," also seems to be entertaining a revived respect for storytelling; there's no point in this novel where you feel you have to push yourself through. It's one long express-train ride to the gorgeous.

And the scenery is as sublime as ever. As Peter pings across the country, he encounters and reexperiences several formative musical masterpieces of the modern era. Powers' evocations of these works are ravishing enough to send readers off in search of Oliver Messiaen's "Quartet for the End of Time" (composed and first performed in a Nazi prisoner-of-war camp), Steve Reich's "Proverb" and Harry Partch's "Barstow." Here's how he describes a passage from Reich: "Sopranos again, in unison: tandem seraphim floating through each other's lines, even slower now, at wider intervals, without a single breath. They sail up and above a vibraphone whose dotted rhythms turn the long sustains into a pocket infinity."

How all of this factors into Peter's tinkering with the DNA of microbes emerges only gradually. His home lab is, of course, another kind of loop, a return to those radiant college days when "the pattern language of atoms and orbitals made sense in a way that little else but music did." Peter is an ideal character for Powers because his intoxication with ideas, understanding, the correspondences between seemingly disparate realms of thought and the way such forces come together in a gyre to shape a personality, matches the author's own devouring, yet faintly melancholy enthusiasm. These are ecstasies that can consume a whole life, but to those who hold a book like "Orfeo" in their hands, it certainly seems worth it.