I hosted a plantation retreat. Is it too late to say I’m sorry?

As we reflect on this Martin Luther King holiday, a personal experience that occurred years ago still horrifies me 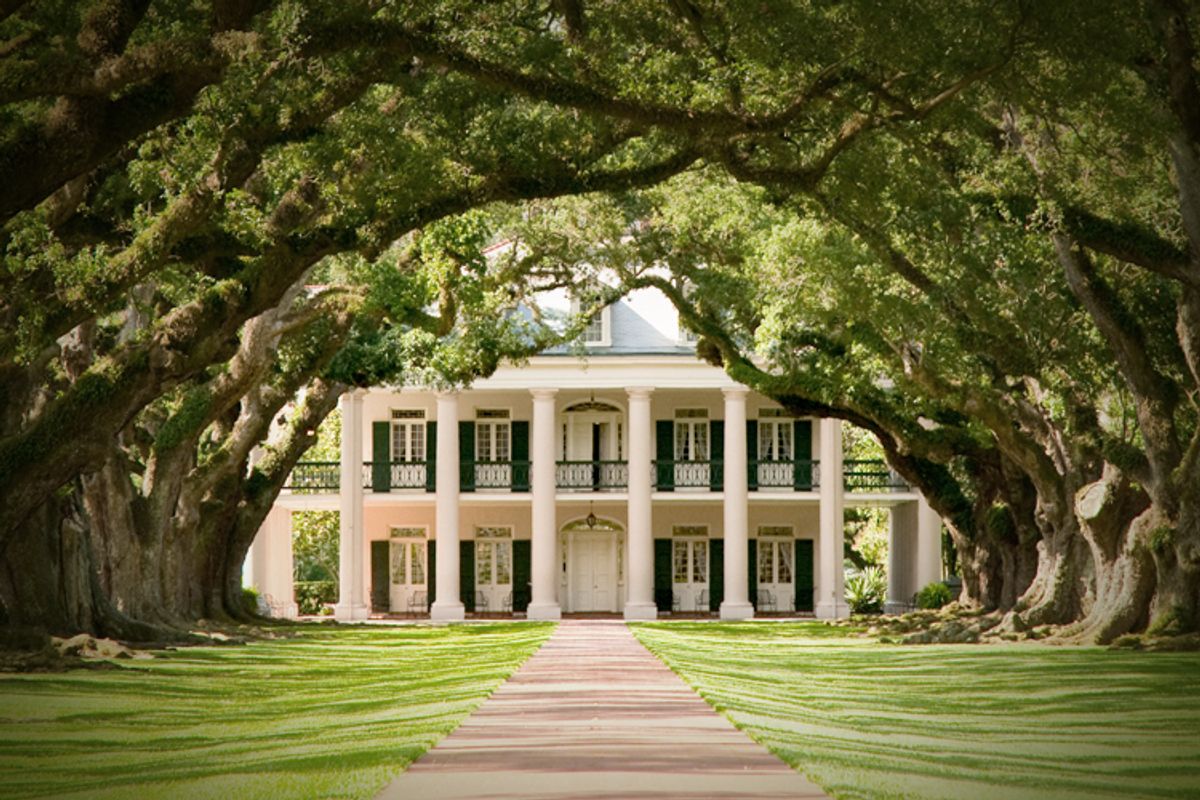 The white guests sipped their drinks on the portico of the manor house as African-American field hands bent to their labors. A tent was being erected on the lawn where, in a few hours’ time, the black servants would feed and entertain the all-white crowd. Someone was extolling the virtues of plantation life in a soft Southern accent as maids polished the silverware in the kitchen.

What’s a Northern leftist doing in a place like this? As one of the hosts of a “client retreat” for my employer, I didn’t feel comfortable coming out with an anti-racist manifesto. But later, when women in caricature headscarves began singing “Sweet Low, Sweet Chariot” to the white crowd, I hated myself for keeping my mouth shut.

It all came back when controversy swirled around Ani DiFranco and her now-canceled “plantation retreat.” Last month, DiFranco, a left-wing singer/activist, finally apologized fully for a weekend retreat she’d been planning to lead at a Louisiana plantation. That followed an initial reaction that Salon’s Brittney Cooper called a “faux-pology,” which Cooper characterized (accurately, in my opinion) as “passive/aggressive.” That first apology also included DiFranco’s asides about “collective outrage” and “high velocity bitterness.”

(Cooper wrestles with the issue of online nastiness pretty courageously in her own condemnation of DiFranco, which is worth reading in full.)

If Ani DiFranco’s apology seems overdue, you won’t think much of my timing: This plantation tour took place a number of years ago, but it’s bothered me ever since.

Many first-time visitors are impressed by the long and rich history of Charleston, S.C. It was already a thriving settlement in 1663 when Charles II gave the city to its “Lords Proprietors” (actually just a few of Charles’ friends), after Cromwell’s defeat and the restoration of the monarchy. The city’s distinctive accent is sometimes attributed to its polyglot history of French Huguenots, English Royalists and Spanish Jews. Charleston began as a seaport and trading center, which became prosperous by dealing in tea, rice, silk, deer hides … and slaves.

Today it’s a popular tourist destination. It has historic architecture, natural beauty, good restaurants, high culture (the Spoleto Festival is held there every year) and great weather. When the travel agents suggested Charleston for our annual “client retreat and getaway,” it seemed like a no-brainer.

I wasn’t the boss, and I wasn’t the one who chose Charleston as a destination. But I certainly thought it sounded like a good idea. Not only was the city attractive, but the prices seemed like a steal to a company that was used to paying Wall Street rates. We celebrated our good financial fortune and left the details to the event planners.

The trouble began when we arrived. We were divided up into small groups, each housed in a different plantation. The accommodations were very comfortable, of course – if you’re not afraid of ghosts.

Especially slavery’s ghosts. I awoke on my first morning to look out on beautifully manicured lawns and gardens, as sunbeams shone on well-polished oak and walnut furniture.  Without exception, the hands doing the manicuring and the polishing were African-American.

I was the “host” of our plantation’s small group. The guests were clients from various companies. Ours was not an especially left-wing line of business (that’s putting it mildly), so I didn’t feel I could safely make political remarks about our temporary home. Breakfast that morning was quiet ...

Until Bill showed up. Bill (we’ll call him that) was the risk manager for a household products company. He was also a left-winger who liked to tell jokes. (We had visited a number of cities together on a project, after which he liked to say we “qualified for domestic-partner benefits in several major jurisdictions.”)

For the remainder of the trip, Bill would also serve as my id, expressing those things I felt unable to say.

The white hostess stopped by our table as we were reviewing the menus and waved her hand to indicate the black women serving the food. “My girls will get you whatever you want,” she said. A pause. “Is there anything I can explain for you?”

Bill nodded. “Can you remind us what manumission means?”

During the course of the weekend we saw a number of tourist attractions, most of which came with at least one spoken or written defense of the city’s antebellum past. Then came that “Gone With the Wind” tour of the neighboring plantations, each with its opulent Big House, fertile fields and flamboyant landscaping.

“In 1743,” read one brochure, “the son of Major John Boone planted live oak trees, arranging them in two evenly spaced rows.” I’m going to hazard a guess and say that the slaves of John Boone’s son planted those trees. But their names don’t appear in the brochure.

That plantation’s slave’s quarters, which if anything have been “prettified,” were spartan brick structures which must have reached oven-like temperatures during the hot and humid Southern summers. Here there were presentations from the descendants of slaves, including descriptions of the Gullah language of their forebears (and still in use today). But this small acknowledgment of slavery’s existence didn’t begin to touch on the horrors of everyday life under slavery – or the barbarity of a society in which one human being is owned by another.

The trees that John Boone’s slaves planted have now grown over the road, meeting overhead and forming a living tunnel through the South Carolina landscape. Years later I was to stand at the “Door of No Return” in Ghana, West Africa, and consider another long and shadowed passage.

The people who walked through that door were not my ancestors. And, while I am not descended from slaveholders, I have enjoyed white privilege in ways both visible and invisible to me. Should I have raised my voice in protest on that trip? To do so, I felt, was to jeopardize my job.

Bill didn’t feel the same way. As our tour bus moved on to the next plantation, our guide resumed her talk. “People criticize slavery,” she said, “but how else are you going to run an operation that requires four thousand field hands?”

Bill’s hand shot up. “I have some ideas,” he said with feigned enthusiasm as the guide looked puzzled. “Collective farming. Subdivision. A union-managed pool of laborers earning the minimum wage, each living in a Levittown-style house.” He stopped for a breath.

“Or perhaps a commune?”

Only momentarily nonplussed, the guide continued her presentation – this many hands were working at any given time, this much planning and organization was required to run the operation, a single plantation-owning family had this much wealth and influence. The phrase “our way of life” was used more than once.

Although I was raised in the North, I’d seen this kind of support for the antebellum South before, and had always spoken up – for example, when I lived in Washington, D.C., and took my children to see the site of John Brown’s uprising at Harpers Ferry, W.V. “Now some say John Brown was on the right side,” our tour guide had said, “and some say he was on the wrong side …”

“Who says slavery was the right side?”

Or when the Southern-born bass player, my partner in a country-western band, kept saying, “The South really will rise again” and I asked: “And do what, exactly?” Silence. Then, “Huh?”

“You think the South will rise again?” A nod. “And do what? Secede? Form its own country? Make its own trade deals with Paraguay and Libya? What will it do when it rises?”

He studied the beer in his hand, then looked up. “You know,” he said with a tone of revelation, “I never really thought about it.”

I’d spoken up then, but I wasn’t speaking now. Was it moral cowardice? I found a couple of other clients who felt as Bill and I did, and we discussed it among ourselves. But that brings me to another admission: Ours was an all-white group. In fact, our entire industry was pretty much all-white at the executive level.

While I’d been identifying segregation and racism with the culture and geographies of South Africa or the Southern United States, I was overlooking their traces much closer to home. I would wager that our entire group felt uncomfortable with the heritage of the antebellum South. But, consciously or not, we were also benefiting from the American legacy of white privilege.

The finale for our retreat was a big dinner at one of the plantations. We were brought to a large tent erected in the fields, where we were served fried chicken by white-gloved black men dressed as house servants and black women dressed as mammies. Afterward a group of women came out to sing gospel songs a cappella in their headscarves. To escape my own discomfort at being served and entertained this way, I asked them if I could sing with them. After a couple of numbers I was invited to lead a song. I chose "Standing in the Safety Zone" by the Swan Silvertone Singers, perhaps unconsciously seeking refuge from my own unease.

I tried to speak with some of the singers afterward, but they seemed uncomfortable talking with me. I suppose they felt their jobs might be in jeopardy.

Maybe it’s just as well. I might have embarrassed myself, and them. Had I said anything, it probably would have come out as the usual hackneyed and self-serving blend of white liberal guilt. What could I say to make up for generations of slavery and oppression?

I still regret my silence. I’ve thought about that trip a lot since then. If Ani DiFranco had asked my advice, I suppose I would’ve told her: When the descendants of slaves tell white people that slavery is still painful, believe them. Just believe them.