The usual process where Democrats want immigration reform, proposals are made and then they die, has a new twist 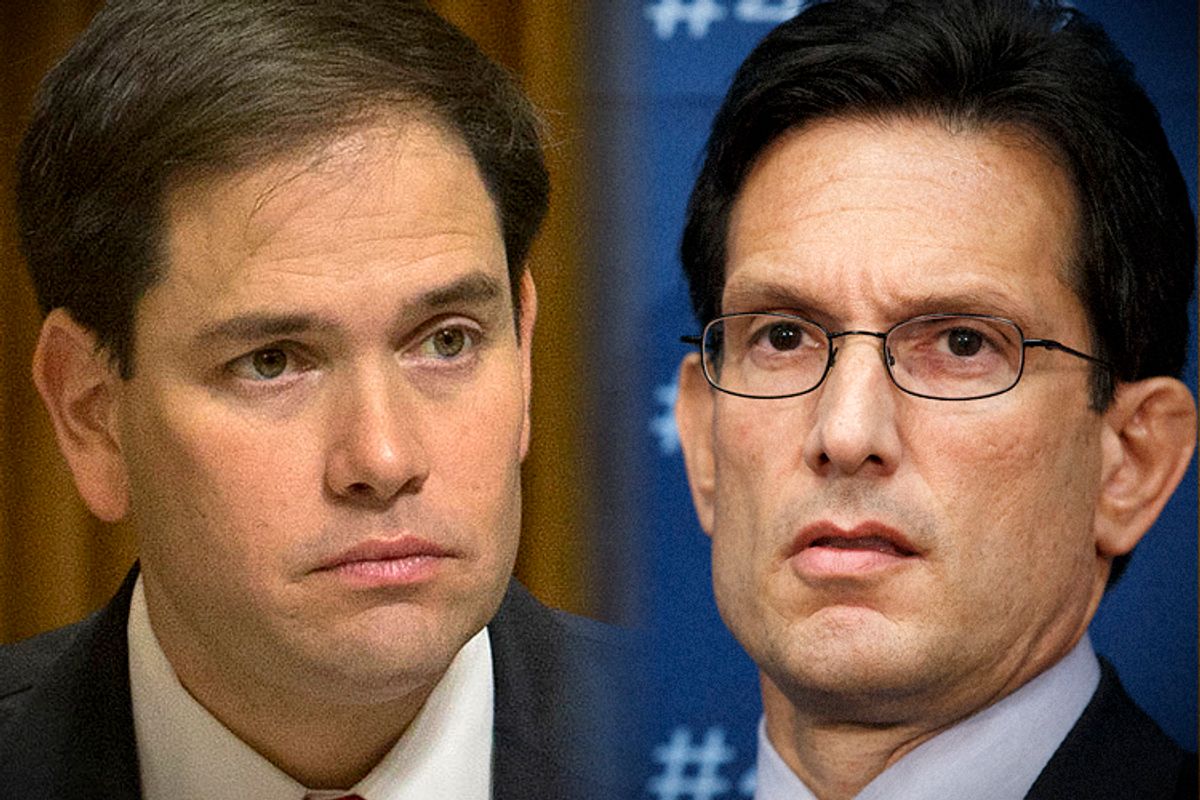 If you'll recall the recent legislative history of "comprehensive immigration reform," this has been the cycle: Democrats and senior Republicans all agree that we should do it, some proposals are proposed, and then it dies, usually in the House, because conservatives are very opposed to comprehensive immigration reform. Some time passes, and then we all try again. There will be another doomed-to-fail attempt this year, according to Democrats and senior Republicans. As usual, Republicans have preemptively assigned blame for its failure to President Obama.

Before his 2012 reelection, Republicans frequently argued that Barack Obama wanted immigration reform to fail, so that he could make Republicans look bad to Hispanics and use that to win reelection. After his reelection, when Obama decided to make another push for reform, under the assumption that a chastened GOP would play along, it eventually became clear that no immigration bill that provided an opportunity for citizenship for currently undocumented residents could pass the House. The end, for Immigration Reform 2013. On to Immigration Reform 2014.

Here's the latest: Speaker of the House John Boehner will "unveil a set of Republican principles for immigration reform before Obama’s Jan. 28 State of the Union address." He and Majority Leader Eric Cantor told fellow Republicans that reform would be a priority this year. Barack Obama has been described by Senator Chuck Schumer as "cautiously optimistic" that the House would pass something this year. It's all finally happening!

Or what is happening, at least, is that John Boehner has decided that Republicans once again need to appear open to the idea of creating a more humane immigration process.

This Politico piece basically explains Boehner's strategy. His list of principles will include "beefed-up border security and interior enforcement," and "earned legal status," presumably instead of "citizenship," for undocumented immigrants. Plus, it won't be one big bill, because Republicans have spent the entire Obama administration decrying long bills, for their length.

The draft principles will also include a promise that immigration reform will be done on a step-by-step basis and will foreclose the possibility of entering into conference negotiations using the Senate’s comprehensive package — pledges that could soothe some Republicans.

Mm-hmm. Soothe some Republicans, and also allow those Republicans to vote for more border security without voting to legalize anyone. That's always been the point of passing reform "step-by-step." Not that anyone even actually expects this limited, piecemeal proposal to pass!

The secret talks are taking place even as leaders doubt that such efforts will be fruitful, in part because of opposition from conservatives who sank the prospects for reform last year. That dynamic hasn’t changed. But Republicans think stating their position is important and could help chart a path forward for reform in 2015 after the midterm elections.

And that's the paragraph that should end all 2014 "could this be the year comprehensive immigration reform passes" pieces. (We finished early this year, everyone!) Republicans think "stating their position" -- a position they will state by claiming it is their position, not by voting to make their ostensible position law -- is important, for branding reasons, but the House is still full of conservatives, so there's still no hope for reform.

That's why this year, just like last year and the year before, immigration reform won't happen: There aren't enough votes for it in the House, because conservatives oppose it and Boehner won't try to pass it with mostly Democratic votes.

There is an alternative explanation, though. One that, conveniently, makes the failure of immigration reform the fault of people other than the ones who explicitly don't support it. This is the explanation Andrew Stiles takes for a test drive at the National Review. Maybe immigration won't happen because ... Obamacare!

A number of House Republicans, including Majority Leader Eric Cantor (R., Va.), have argued that the Obamacare fiasco is to blame for their reluctance to tackle immigration reform.

Other Republicans, including Senator Marco Rubio (R., Fla.), one of the architects of the Senate bill, have suggested that President Obama cannot be trusted to properly implement a large-scale immigration reform, given the countless waivers and exemptions he has handed out with respect to Obamacare. Conservative skeptics have long argued that there would be little stopping the administration from fully implementing aspects of the new law it likes, such as legalization and citizenship for illegal immigrants, while completely ignoring the provisions it doesn’t like, such as increased border security and interior enforcement. As Rubio told conservative radio host Laura Ingraham yesterday, “even people that would like to do something on [immigration reform] are finding it hard to argue against that.”

This is not a terribly surprising message from Rubio, who began trashing comprehensive immigration reform about 10 minutes after the bill he helped craft passed the Senate with his support, but it is a fun new variation on the classic Senate "I can't support this thing I support because of this unrelated thing" argument. It certainly is strange that conservatives opposed immigration reform before the botched Healthcare.gov website rollout, if that botched rollout is why they can't pass reform, isn't it?

"Obamacare" is a great excuse to avoid ever doing anything. How can we trust this administration to go to war against Iran if it can't build a website? We should probably destroy our nuclear arsenal, before the Obungler bungles his way into armageddon. And don't get me started on the NSA! I didn't do my homework because I cannot trust this administration to grade it correctly.

"We can't pass reform because we don't trust the president" isn't really a better or more convincing argument than the last one ("the president doesn't want us to pass reform because he wants us to look bad"), and I don't expect it to make the Republican Party look more compassionate or appealing to people who currently (correctly) think conservatives are excessively hostile to immigrants in general and Latinos specifically. But the point isn't really to make an immediate play for the Latino vote in 2014. It's sort of light legislative extortion: If you want reform to pass, you'd better elect a Republican president. It would almost be convincing -- a pro-reform Republican president would be more likely to convince or force congressional Republicans to vote for reform than a hated Democratic president has been -- if it weren't for the fact that Congress already tried this under President George W. Bush, and it failed. Because conservatives control the GOP and most conservatives oppose granting undocumented immigrants legal status. It's that simple.

As the ACLU notes, there is still one thing that could upend the entire immigration debate: the potential deportation of pop superstar Justin Bieber. We can only hope that mere possibility will finally spur Congress to act.