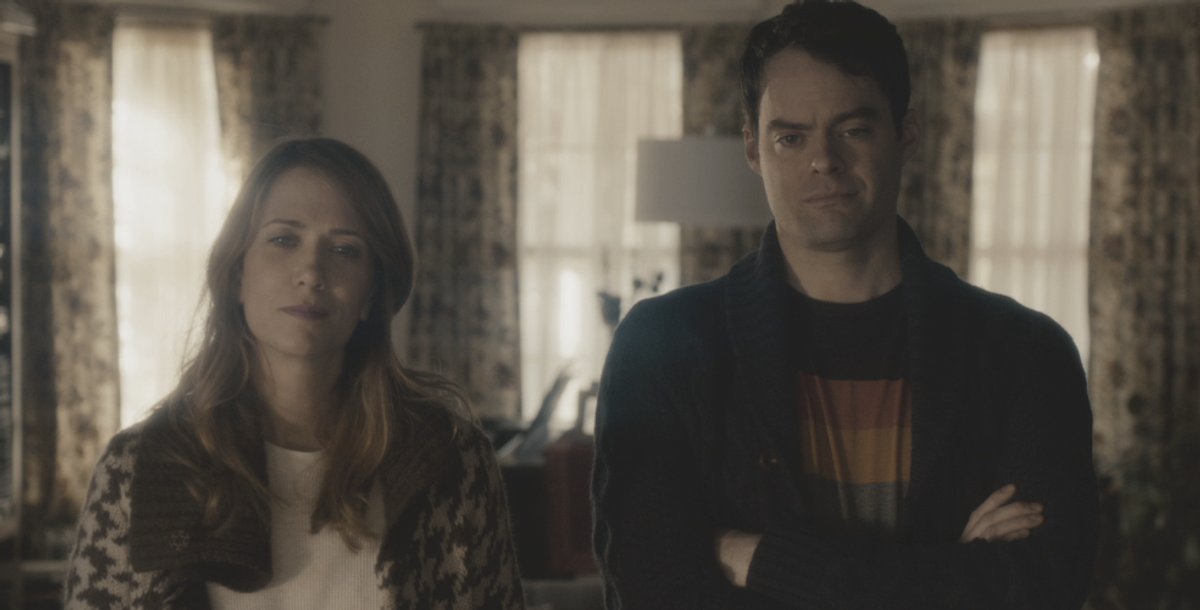 When it's released in theaters, audiences will be stunned by the emotional power of "The Skeleton Twins," director Craig Johnson's sophomore film that stars "SNL" alumn Bill Hader in his most serious, emotionally complex role yet.

Milo and Maggie, played by Hader and fellow "SNL" alumn Kristen Wiig, are estranged adult siblings brought together when Milo attempts suicide. When the sensitive, cynical Milo moves in with his uptight, volatile sister and her sweet, uncomplicated husband, Lance (Luke Wilson), the siblings are forced to confront the personal traumas that have kept them apart for so long.

Despite its darkness, "The Skeleton Twins" is funny and honest and bittersweet. Hader and Wiig transform from comics to full dramatic actors with a wide range and depth, building on their on-screen chemistry from "SNL." In an interview with Salon, director Craig Johnson discussed his vision for the film, the role that comedy and improv played in it and how Hader and Wiig joined the cast.

You mentioned that your family didn't have the same types of issues as Maggie and Milo. So then -- where did you get the idea and source material? (Warning: spoiler alert ahead!)

Well, you know, we all have-- every family is weird, you know, on some level. And I think that, you know, I like my family a lot but it doesn’t mean we don’t have our own quirks and idiosyncrasies and struggles and all of that but you know, the idea just came...My co-writer Mark Heyman and I were in film school actually and a lot of these Sundance movies were coming out at the time -- “The Squid and the Whale,” “Me, You, and Everyone We Know,” -- that were really inspiring us and we just sat down one day and we want to write a movie and we want it to be funny, we want it to be a little sad, sometimes at the same time, like these movies we love. But what do we want to write about? We just sort of threw around ideas and subject matter, and one of the things that Mark talked about was a student-teacher relationship that went down at his high school that he went to, and he knew the teacher who was very beloved, and he knew the student, and it was a real kind of complex sort of issue. That sort of a student-teacher relationship is very black-and-white, not cool, everyone knows that-- but we were very interested in exploring that idea of a student-teacher relationship that had some nuance and complexity to it. Then we kind of built it out from there and the character of the student just kind of-- we gave him a sister, and then we made that whole thing backstory, basically, and we became more interested in the sibling relationship.

In this movie, there are so many traumatic things that happen to these people that it could have easily become manufactured or melodramatic. Instead, the tragedies felt real. How did you keep that from happening?

Yeah, totally. Well, there’s two things: I think these tragic events create a domino-effect and one thing leads to another, and I think it doesn’t feel like too much or feel like it’s overwhelming you with melodrama because it just sort of parsed out incrementally, what happened and what went on.

I feel like the whole theme of the movie is dealing with dark shit with a sense of humor. That’s how I get through dark stuff...I laugh at things that scare me. My sister does, too. I have a sister who is two years younger than me and we’re very very close and we connect with this weird off-beat sense of humor, and when we’re going through dark times, that still can kind of connect us. And that was a major element to the movie, to explore the relationship between siblings who go through really dark stuff.

Comedy is often used as a way to talk about tragedy -- something that comedians like Louis C.K. and Tig Notaro do so well, for example, and what made them so popular.

That’s kind of what the movie’s about, honestly. I think it works so well because people relate to it. Everyone deals with dark stuff in their lives. And I think that if you don’t laugh in the face of darkness, you’re just done for. To talk more just about the tone of the movie -- the tightrope between the funny and the sad -- I think that’s just how life is. I wanted the movie to feel like real life and real life is never split into genres. It’s never a tragedy and it’s never a comedy; it’s often both, sometimes in the same day, sometimes within the same argument with people. I love that. You bring up Louis C.K. and Tig Notaro, and I think that they’re so effective because they give you a release mechanism. It’s like, “It’s okay now." It makes you able to deal with the darkness and the sadness because I’m going to talk about it in this funny way that rings true to people.

Did you have comedians in mind when you were writing the script?

I did! I don’t know if did when I was writing the script so much, but I when I really sort of think about casting I always gravitate towards comedians. I don’t know why! I like comedians. I like funny people, and I also think funny people are smart, and I think often funny people are very honest and they take everything in, including the sadness. It’s a common thread through stand-up comedians and comedians that they struggle with a lot of sadness and depression and I think it’s cause they’re smart. There’s a character in the movie, Kristen Wiig’s character is married to Luke Wilson’s character [Lance]. Luke Wilson is the opposite. He’s really this sweet, honest, sincere, happy-go-lucky dude. He’s maybe not the smartest tool in the shed, but he is just rockin’ it through life, maybe because he’s not a deep thinker.

Was anything improvised in the movie?

Yeah, oh yeah, definitely. I could never do a fully improvised movie -- there’s some filmmakers that do that, they just write an 8-page treatment and go off and do it. That would freak me out too much, so I always have a script that’s really specifically written, but then once we get on set I love it when actors riff on the lines and ad-lib things and put things into their own words. I encourage them to do that whenever they want, and if it doesn’t work, I’ll pull them back onto the script, or sometimes, there’s a few instances where I say I’d like to do this just on-book, as it’s written. But I find that improv, when working with such world-class improvisers--it just makes everything better. It makes everything more real, natural, and really a lot more funny. I mean, some of the funniest stuff, for me, in “Skeleton Twins,” is some of the improvised stuff.

Oh my gosh, little, subtle things. There’s a scene where they’re in the kitchen and Luke Wilson is wearing those foot-glove shoes [Vibrams] and Kristen is like, “Are those shoes?” Well in the script, it’s just written that she’s wearing those shoes and she kind of gives him a look and kind of shakes her head...but at some point Kristen’s just looking at those shoes and is like, “Are those shoes?” and Luke hit back with, “Yeah, they’re a hybrid.” And this whole conversation erupted where she’s like, “A hybrid of what?” “A hybrid of a shoe and a foot! A human foot.” And I just thought, you can’t write that. It was so perfectly that character of Lance. It’s one of my favorite lines in the whole movie and was totally improvised.

How did Bill Hader and Kristen Wiig get involved with the project?

We had a killer casting director, Avy Kaufman, who is in New York and she has access to all these folks...so we were able to make a wish list of all these actors that we wanted, and it was actually Avy who suggested Bill. I loved Bill on “SNL,” but, you know, this is a subtle, heartbreaking, but funny comedic drama -- so is Bill really right for this? But she had seen him in actually a dramatic reading of a script, a table reading, opposite Kate Winslet and Paul Dano and Bradley Cooper. And she was like, “Bill struck me as the most subtle and moving and heartbreaking out of that group.” So I met him for a drink and just instantly talking to him, I had a whole new take on Milo that was Bill -- you know, this kind of sweet, sensitive, nerdy kind of guy, which is more kind of the real Bill Hader which you don’t get so much when he’s doing character sketches.

And then Kristen came on later in the game and Bill was attached first -- they weren’t brought in together. There were other people we were talking about for Maggie, but in the back of my mind I really did have Kristen, and I was a little wary of pairing the two because I didn’t want it feel like a gimmick...but then when I thought about it -- this isn’t a gimmick at all, it’s really going to re-contextualize and sort of, I think, reshape this relationship that’s already in the public’s mind, I think in a cool way. Especially because they’re brother and sister. The familiarity that the audience has with them together, and that they have together, and that they work together, I think gives them chemistry.

"The Skeleton Twins," which debuted at the Sundance Film Festival in January, is currently looking for a distributor. Johnson says he has several other projects in the works, including "a throwback to 'Gremlins' from the 80s" and a high-school comedic drama.