Aussie post-punk legend plays a solo gig after the Sundance premiere of the dazzling doc "20,000 Days on Earth" 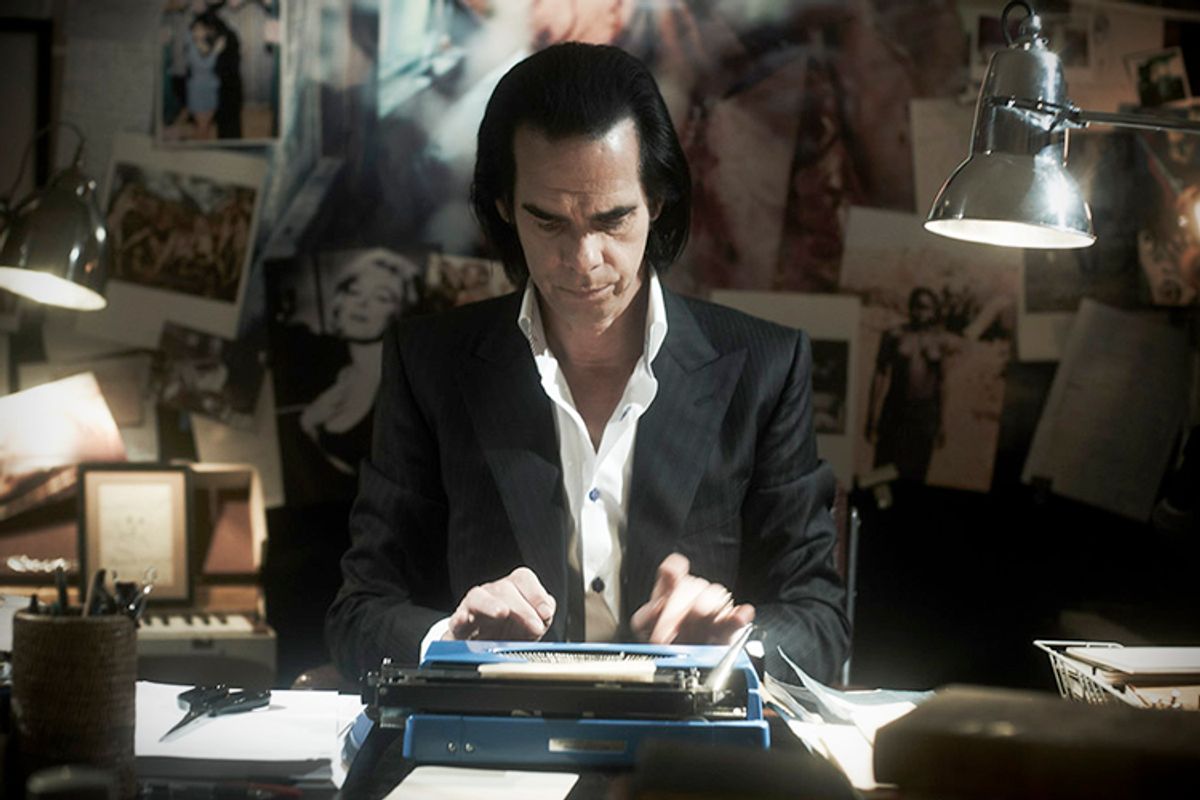 PARK CITY, Utah — If it’s freezing and dumping polar-vortex snow wherever you are, may I suggest a trip to the freakishly warm Wasatch Range, where we’ve had brilliant blue skies and daytime highs in the 40s all week. My day of false spring at the Sundance Film Festival began with an impassioned conversation with a New York colleague about the Armond White scandal, conducted in a shopping mall parking lot outside the Coldstone Creamery. (I didn’t get any ice cream, but I was sure tempted.) It ended in a basement nightclub on Park City’s Main Street, where post-punk legend Nick Cave slid behind the piano, after perfunctory protests (“I am so fucking jet-lagged”) to do a brief solo set for 40 or so onlookers. If you’re as much of a geek as I am, you’ll need to know: “God Is in the House” and “People Just Ain’t No Good,” bracketing a fantastic dirge-tempo version of Cave’s execution-day classic “The Mercy Seat.” Yes, it was awesome, and no, I’m never laundering those clothes again.

This was at the party following the premiere of “20,000 Days on Earth,” an unclassifiable and frequently spectacular documentary made by British visual artists and videomakers Iain Forsyth and Jane Pollard, in close collaboration with Cave. Although it’s in no way a standard biographical picture or music documentary, the film is extremely intimate and revealing. In one sequence, literally a fictionalized therapy session, Cave discusses his first sexual experience (which he primarily recalls in aesthetic terms), his loving relationship with his father (who died when he was 19), and his parental anxiety that his twin sons are having too sheltered and privileged an upbringing. He remembers, he says, playing chicken with oncoming trains on a railroad bridge near his Australian hometown, and cheating death by jumping into the river below. Doesn’t that anecdote explain nearly everything about Cave’s worldview, and the mythological universe he creates in his songs?

Cave worked the crowd genially after the screening, but wasn’t in a mood to talk seriously. “I’m sick to death of hearing my own voice” after all the talking in the film, he said. “Let’s hear from those guys” — meaning Forsyth and Pollard, an appealingly nerdy couple dressed entirely in middle-aged Goth black. Asked whether he thought the movie was biography, fiction or psychodrama, Cave responded to the last word: “That. Psychodrama, except without the ‘drama’ bit.” A woman leaned in to tell him he was her favorite performer and storyteller, and wondered whether she might get to feel his heartbeat (a reference to a lyric from the recent, terrific “Higgs Boson Blues”). He seemed to deliberate a moment about allowing this interaction to go there, then said: “Sure. Form a queue.”

Impressionistic and nonlinear, driven by many striking moments of visual and thematic juxtaposition, “20,000 Days on Earth” also sometimes calms itself into a more familiar documentary mode. We see Cave and his band, the Bad Seeds, recording the recent album “Push the Sky Away” in the studio, and Cave and bandmate Warren Ellis lunching on home-cooked pasta and eel and reminiscing about long-ago gigs. (The story about Nina Simone that involves the phrase “Champagne, cocaine and sausages” is especially hilarious, and also enlightening.) There are also passages drawn from Cave’s “weather diary,” documenting the changing skies over Brighton, his adopted home on the south coast of England; archival images from his famously nihilistic early band the Birthday Party; and mysterious, often wistful road-trip conversations with actor Ray Winstone, former bandmate and German noise-rock pioneer Blixa Bargeld and pop chanteuse Kylie Minogue, who helped engineer Cave’s one and only trip to the top of the charts, nearly 20 years ago.

Forsyth and Pollard said after the premiere that they had been inspired by several flawed and ambitious non-narrative films of the ‘60s and ‘70s, including Jean-Luc Godard’s Rolling Stones documentary “Sympathy for the Devil” (aka "One Plus One"), the loopy and half-fictionalized Led Zeppelin doc “The Song Remains the Same” and Lindsay Anderson’s deranged allegorical fantasy “O Lucky Man!” So that’s the world we’re in here, and if you’re impatient with a certain amount of willful artistic randomness, this might not be the movie for you. On the other hand, you’re probably not a Nick Cave fan either, and this movie is first and foremost a must-see for Cave devotees and admirers of ‘70s auteurist cinema.

One thing “20,000 Days on Earth” shares with those ancestors, beyond a repeated willingness to violate the so-called boundaries between truth and fiction, is an evident passion and enthusiasm for the subject matter. You can feel the trust between Cave and the filmmakers, as when he discusses the years he lost to heroin addiction or his fears of losing his memory as he grows older. He has spent his life creating a world in his songs, he tells the therapist — an absurd and violent world of heroes, villains and doomed romance in which God is not only real but an Old Testament presence, watching over everyone and keeping score. In the outside world, the real world, Cave does not believe in God. But this dense, puzzling and often gorgeous film —itself something like a melancholy and doom-haunted Nick Cave song, or like a delicious chocolate with an insect center — reminds us that God and reality and the world are all things we make up as we travel the mysterious road from birth to death.