Big Brother on your iPad: The video game that's taking on the surveillance state 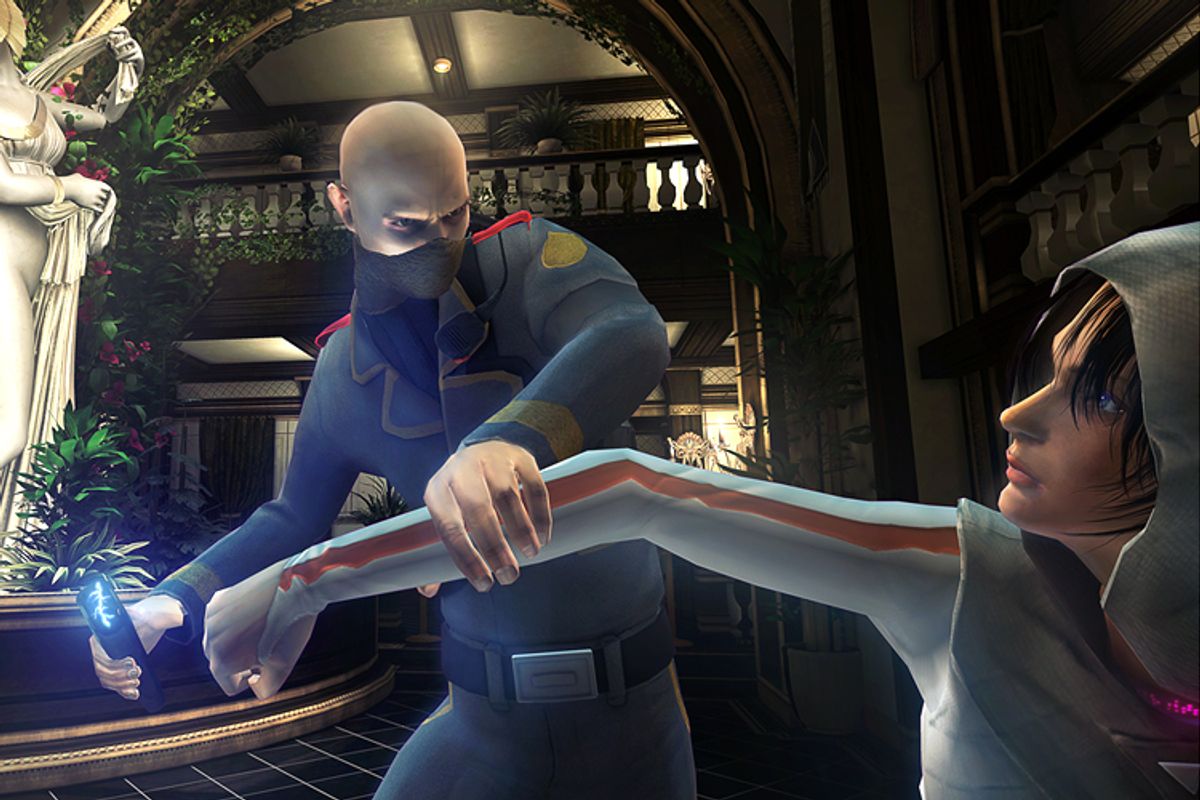 I’m sitting in a cramped conference room inside an aging office building that’s supposedly over a year and half overdue for demolition, its lot a disused holdout in the middle of otherwise-thriving downtown Bellevue, Wash. This is, as of mid-December, anyway, the current home of Camouflaj, a tiny independent video game studio that’s been working here on its paranoia-infused debut title “République” since late 2011. Studio head Ryan Payton calls his company “scrappy,” which doesn’t feel inaccurate given the threadbare state of the space – the two-story construction’s sad exterior face practically sags in the presence of one of Microsoft’s posh, glittering towers a few blocks opposite.

Despite the lot’s numbered days, the team at Camouflaj isn’t occupying their office under the radar, though tenancy here seems to appropriately echo the studio’s rebellious anti-establishment philosophy. “République” does feel unorthodox for its medium: A featured download on iOS’ App Store since its debut last month, it contradicts the broader strokes of mainstream industry logic by offering an intellectually dense narrative adventure that is simple enough to play with one finger, further bolstered by triple-A-quality production values that bely the team’s size and shatter expectations of what is possible on a mobile platform.

Payton says the game’s inherently difficult subject matter -- the global trend toward surveillance and invasions of privacy -- would have doomed it to cancellation a thousand times over in a big-budget corporate environment. But even more fascinating is that “République” is a direct translation of Payton’s actual worldview.

Behind me in the conference room, a quote from Thomas Jefferson is tacked to the wall. "I believe that banking institutions are more dangerous towards liberties than standing armies," it reads.

This strikes me as particularly apt -- the many non-military dangers to our liberties are something Payton cares deeply about.

2013 was something of a banner year for privacy issues. Former National Security Agency analyst Edward Snowden’s revelations to the Guardian last June drew back the curtain on long practiced state surveillance. Following the scandal, sales of Orwell’s prophetic “1984” soared; later that summer, Chelsea Manning was sentenced to 35 years in prison for providing WikiLeaks with well over a half a million classified government documents, a sentence she is now attempting to have commuted through a presidential pardon.

In the last month alone, Washington, D.C., Federal District Court Judge Richard Leon criticized the NSA’s spying program as “almost Orwellian,” even as President Obama’s planned reforms are being questioned and corporations from Coca-Cola to Facebook are receiving significant scrutiny for data collection practices. Payton believes this is all par for the course.

He laughs when I bring up the fact that he's changed his phone number at least twice in the handful of months I’ve known him.

“I’m going to change it again too,” he says, explaining how often he revises various types of personal online data. “It's just an inherent mistrust of technology and the culmination of personal information [collection] that's taking place.”

In talking with Payton, it’s easy to see the origins of the episodic “République.” The game follows Hope, a female prisoner attempting to escape Metamorphosis, a dystopian state where omnipresent surveillance is law. The first episode, “Exordium,” opens with Hope, accused of reading a “contaminated” manifesto not unlike Goldstein’s in “1984,” making a desperate call to you, the player, an intentional metatextual irony that is perhaps best enjoyed on an iPhone.

“You have to help me,” she pleads, the panic clear in her voice. “They’re going to hurt me. Recalibrate me.” To assist, you’re given the ability to hack into Metamorphosis’ vast network of security cameras (“You’re just another pair of eyes watching me,” Hope says), moving from one to the next, becoming a kind of touchscreen deus ex machina through a user interface system echoing the Freemasons' pyramidal Eye of Providence as you guide Hope to safety.

Unlike most video games, which tend to approach totalitarian issues through the muzzle flash of an assault rifle, “République” is also primarily a stealth affair. Its focus is on voyeuristically scouting what’s down the next corridor, watching and waiting for a clean break so that the civilian Hope can sneak past Metamorphosis’ security forces.

“I'm more of a fan of art that makes you think,” Payton says. “I think in part I want people around the world to play our game and start thinking more critically about what's going on in the world [so] they can form their own opinions.”

Unsurprisingly, Payton’s personal history making video games heavily informed the design and themes of “République.” Before starting Camouflaj – which ran a Kickstarter that netted the burgeoning studio over $500,000 in 2012 – he served as creative director on the multimillion-dollar Xbox exclusive “Halo 4,”though he credits a five year stint in Japan and working at Konami, a top-tier Japanese developer, as maybe among his most eye-opening experiences.

Working at Konami, where Payton was hired in 2005 as an assistant producer on “Metal Gear Solid 4,” then the latest in director Hideo Kojima’s flagship stealth series (you can easily see the “Metal Gear” influence on “République” in its strains of sociopolitical paranoia as well as its design), was distressing, Payton says. Long before WikiLeaks brought government secrets back into the public eye, Japanese corporations were ahead of the curve in employee security measures.

“They basically had this official virus installed on everybody's computer that would block websites – they would block Gmail and Hotmail from your Web browser, and would randomly take screenshots of your screen and send them to the HR department,” he says. “I just felt so violated and upset and angry that I was just being treated almost like a prisoner within this company.”

Now that the surveillance state has developed into a hot-button issue worldwide, Payton says the lack of privacy is only going to get worse.

“I think we're just getting started in terms of people's civil liberties being challenged,” he says.

“République” may be an important entry for an industry long languishing in adolescent arrested development, but Payton freely admits it's hard to tell a story about the dangers of surveillance in a video game format.

“I think what freaks people like me out is when we start to watch the trends and start to imagine what's going to happen,” he says. “Whether you're a screenwriter or you're a game creator, actually demonstrating through a narrative how privacy invading systems can really harm you is really difficult – it's more of a cerebral type of paranoia.”

One of the core problems is the complexity – and moreover the lack of tangible impact – present in these systems.

“’Dr. Strangelove’ didn't have a problem demonstrating why nuclear weapons are dangerous. It's very clear – you can easily show [it],” Payton says. “Showing why the NSA listening in to your phone conversations is a life-threatening or a serious thing is really difficult. Especially if you think about what's actually occurring today in society.”

It is entirely possible to play “République” without thinking about its larger themes. But there is plenty to mine within its design for those that seek it out. Payton teases that the game’s as yet unimplemented social media integration is just the groundwork for future ideas, for one.

Similarly, scattered throughout Metamorphosis are banned books like “Lady’s Chatterly’s Lover” and “Naked Lunch,” which provide a glimpse into the mind of the facility's tyrannical Overseer, explicating why each is a danger to the state. It’s a clever design implementation that will hopefully inspire some players to actually seek out and read these classics.

Camouflaj went as far as releasing the Overseer’s own manifesto, which reads like a midcentury technocrat’s “Leviathan,” as a 200-page supplemental. Payton says the manifesto was inspired largely by Tim Wu’s 2010 book “The Master Switch,” which essentially argues that information technology is gradually getting funneled into one pipeline and controlled by one entity, a dangerous idea that in turn has affected his personal data-changing habits online. He admits his attempts to stay ahead of surveillance probably won't help in the long run.

“I think they have won,” Payton says, extrapolating. “Children these days, they are born into a society and a country and they’re already registered whether they volunteered or not. They’re part of that system. In the future it’s going to be extremely hard to escape.”

Still, Payton says the overall advancement of information technology does have its benefits, among them the very existence of more widespread communication where and when it matters.

“Technology as a whole is actually a net positive for society because it’s actually giving people a lot more liberties and opportunities to expose wrongdoings,” he says. “But people like me who think about this sort of stuff every day – I think that we just get worried and try to protect what’s still good about it.”

While the democratization of video games by smaller developers has become a huge trend in its own right over the past few years, Payton doesn’t really see Camouflaj as a typical “indie” studio. “République” seems to exist in a place outside of either the commercial action tropes of the triple-A or the stylistic arthouse-to-arcade gamut of the more hipster indie-chic, and Payton wouldn’t have it any other way.

“I see a very different kind of independent game development studio [with Camouflaj],” he says. “Not only do I not feel like it fits in with the indie crowd of the games industry, but I also know that nobody ever refers to us as an indie studio – and I think it has to do with the subject matter and the type of games that we create, and our ambitions.”

Payton’s vision for “République” spans five episodes; he remains tight-lipped on the direction of the narrative, but does tell me the game has grown significantly since its initial concept, and that players should expect things to get progressively weirder beyond the relatively straightforward introduction.

“We introduce so many questions and we don't answer many of them in episode one,” he adds. “And very much intentionally.”

It is anyone’s guess how exactly that will play out.

“I really want to take full advantage of the fact that we're independent,” Payton says. “We don't have a publisher. The arrangement we have with Apple is just like what Apple has with tens of thousands of other developers – there is no arrangement. We can say whatever we want.”

The studio is, above all, about taking risks, he tells me.

And though I learn on my way out that the presence of the Jefferson quote is more of a funny coincidence than a guiding principle, Camouflaj nevertheless seems sufficiently suffused with its character.

“I feel like our country was born out of these ideals, that you have a choice to a certain degree, but I think it’s maybe just a false choice,” Payton says. “Maybe we never had a choice.”

Steve Haske is a Seattle, WA-based journalist and culture critic with Wired, Medium, Paste and other outlets. Follow him on Twitter @afraidtomerge.