How did this get published? A straight critic slags gay men for not being stereotypes 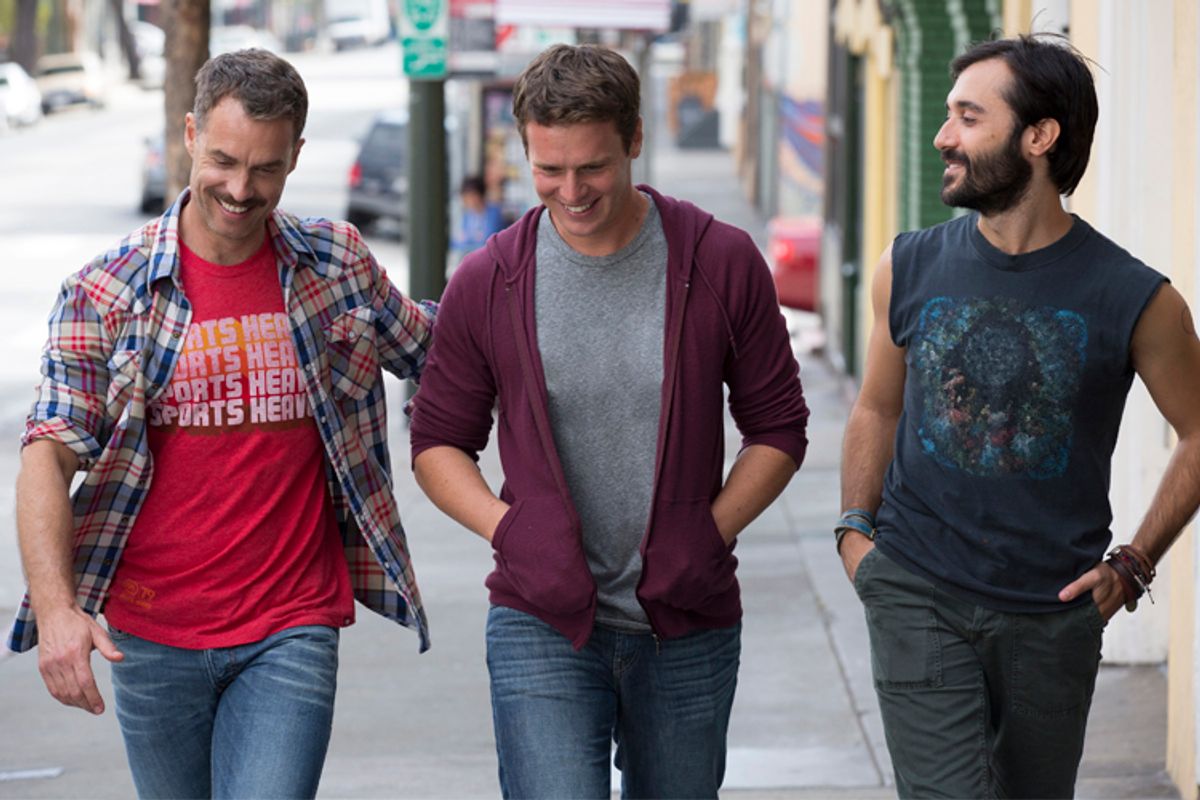 HBO's "Looking," which debuted over the weekend, was extremely unusual -- a program about and created by gay men. The show, even before it's found its creative footing, exists as a document of a segment of human experience not often on TV. In terms of representation, it's a good thing. So of course a writer for a major publication had to write a piece for a straight male audience dismissing the show entirely.

One Mick Stingley published a piece on Esquire's website titled "The Straight Man's Guide to HBO's 'Looking'" -- a piece that avails itself of casual homophobia and actually incorrect facts. It's deeply typical of the sort of work produced by straight men who walk into unfamiliar rooms and, rather than listening and seeking to learn, reframe the entire conversation around their own experience and limited worldview. From the jump, the piece fundamentally misunderstands what it's about:

"HBO has a new show called Looking that's about three gay guys in San Francisco who are single and looking to hook up. Get it?"

Well, the thing is, most gay men would and do get it, because "looking" is common slang among that community. Making a snarky joke about how a show's title is unimaginative, when in fact it's part of an argot a community other than Stingley's own shares, is an inauspicious start. But at least it seems to have passed by an editor, unlike:

"People will be talking about it for a while wherever you get your coffee, in the media and probably a lot of women, too. So there are a few things you should know while you're waiting for Mad Men to start up again."

Yes: As you wait impatiently for a show about heterosexual couplings to return, you may as well occupy your attention with this gay show so as to keep up with "the media" and "women," two groups that necessarily are obsessed with gay men and will cover them even if, as Stingley goes on to allege, they don't deserve the attention.

Because Stingley was bored by "Looking"! Yes:

"It's a big deal because it features gay men being gay and doing whatever without resorting to stereotypes. But instead of, say, funny, mincing guys with witty one-liners and put-downs, Looking introduces three ho-hum characters you wouldn't hang around with if they were on SportsCenter."

Leaving aside the sympathetic magic by which Stingley imagines himself a friend to sportscasters inside his television, the idea that "funny, mincing guys" are somehow better is ludicrous on two counts: one, that gay people ought to exist for straight men's entertainment even when Stingley himself acknowledges that that entertainment generally relies on stereotypes, and two, the use of the incredibly coded word "mincing." The term is a nasty, homophobic put-down when used onstage at the Golden Globes by Michael Douglas, and is one, too, when used in the pages of a magazine that needs to reassure itself about its heterosexual bona fides even though they run pictures of Chris Hemsworth on the cover.

The piece draws out comparisons to "Sex and the City," a broad comedy that bears no similarity to "Looking" except for its ability to discomfit straight men by being frank about the fact that other people enjoy having sex. "Sex and the City" gets called "occasionally funny" by Stingley, while "Looking" is, to his mind, boring:

"Guys hook up without fear of STDs yet no one looks like they're having any fun. It commits the heinous sin of being gay and boring. You'll be praying for a car chase and checking your phone a lot watching this."

Stingley's writing commits the heinous sin of being factually untrue and ideologically repulsive. On a date in the first episode, one fellow asks our protagonist if he's been tested for sexually transmitted diseases, shocked by the admission of public cruising. And why is being "gay and boring" a sin? Ought gay people to be de rigueur delightfully entertaining, forbidden from expressing any shades of emotion short of campy glee? Or must gay people clear a special bar to be worthy of Stingley's consideration?

The craziest thing of all is that only one episode has aired. And yet Stingley feels free to dismiss the show as not worthy of existing, noting that it neither depicts gay men as "extremely fun and funny" or "starkly sad and depressing," two modes with which he is comfortable.

Why should any of us be surprised? This sort of thing just keeps happening. Heterosexual men, confronted with something they don't understand, bellow. Bill Keller, in the New York Times, is unconcerned with factual accuracy as he slags a cancer patient as somehow undignified. Michael Douglas has expressed disdain for gay people every time he's picked up an award for being brave enough to play one. A trans woman and private citizen trying to keep her status to herself is treated as half-charlatan, half-wonder of science by the good people at ESPN.

There are -- still! -- very few programs on the air featuring gay characters in any capacity, and those that exist tend either to mindlessly indulge stereotypes (as does the work of Ryan Murphy, when he indulges his worst tendencies) or to winkingly announce that this gay guy is different because he's not a queen (as did the departed, and very good, "Happy Endings"). "Looking" is not for Mick Stingley or for Esquire readers. It's for a group of people who almost never see themselves on television allowed to simply be people. Why he felt the need to put the show down is befuddling; I don't write Op-Eds about how boring I find "Pardon the Interruption." Indeed, I don't watch it. If Stingley were to watch "Looking" with an open mind, he might discover that a series about how quotidian and melancholy the lives of gay men can be would actually be enlightening. But, one week in, that ship has evidently sailed.

Esquire has, like a surly child, apologized if you got mad, appending to their piece:

"UPDATE: We apologize to anyone offended by our attempt at humor in this piece. It reflects one man's viewing experience. He does not think all gay people are boring. Just this show, a little."

Right. He doesn't think gay people are boring. He thinks they're fabulous, and he doesn't want to hear anything that complicates that! That's exactly the problem.