Members of the Pixies talk to Salon about the perks of being veteran artists, and the downsides of social media 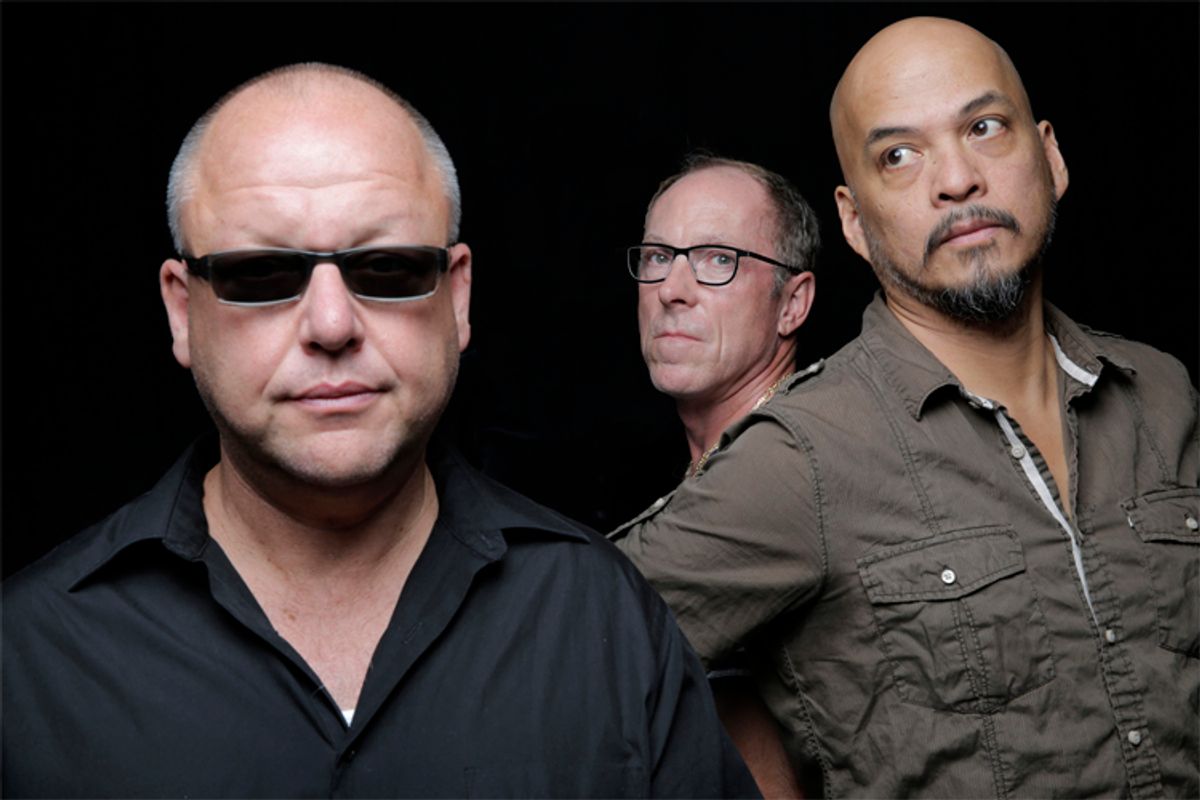 Goodbye, 2013, which marked the 20th anniversary of Black Francis bidding bitter goodbye to his influential Pixies -- my favorite fucking band of all time -- a summary dissolution that included a kiss-off to bassist Kim Deal by crappy fax machine, no less. Hello digitally reconstituted Pixies X.0, soldiering forward with a rotating arsenal of socially networked superfans and capitalizing no longer on earned nostalgia but on self-released new music calling the shots on a cratered music industry.

Its newest move, "EP-2," arrived Jan. 3, courtesy of the official Pixies site, which is where the defiant '80s quartet now markets and distributes the art and commerce it makes as a self-employed '10s power trio. Like its predecessor "EP-1's" scorching lyrical beatdown "Bagboy" and self-aware rehab "Another Toe in the Ocean," "EP-2's" post-ironic sex anthem "Blue Eyed Hexe" and narcotized astro-groove "Magdalena 318" prove the rebooted Pixies are fully under the power of indefatigable rockbot Black Francis, who has barely met a year or two within the last 30 in which he hasn't released one if not two albums. Even the new stumbles in the unsigned (!) Pixies' digitally sliced and diced downloads -- and there are a few -- remain in even the lamest geek argument a fine example of an indie, alternative, whatever, nevermind band (and brand) fighting to remain vital (and visible) in an internetworked age of accelerating white noise.

"It's not that we don't want to be signed," said Black Francis, real name Charles Michael Kittridge Thompson IV, whose post-Pixies inversion Frank Black worked tirelessly beneath the shadow of his more timeless alter ego. "It's just that there aren't a lot of places that you want to be signed right now. It's more hassle than it's worth. If you have a brand name, you can sidestep some and go directly to customers. But it's a pain in the ass if you're just starting out nowadays, because how do you get noticed? Where? On the Internet, the biggest bathroom wall in the universe? It's hard. You need a freaking logo to get noticed now, you know? It's hard."

"I feel bad for people just starting out now," he added in a riotous holiday phoner between nonstop Pixies tours, the newest of which boots up Jan. 15 in torrid Toronto. "Well, I don't feel bad for them, but it's great if you've been around for a while. You're not going to sell a lot of records, but you can do a lot of other stuff and get rid of middlemen. And when you do make a deal with a record company, you can call the shots more than you used to. We used to have contracts and we were at their mercy. We were pretty uncompromising in a creative aspect, but the financial aspect? Shit, you used to have to take what they gave you, and you couldn't really do anything about it. But now, it's the other way around: They're desperate. If you've got a name for yourself, they're desperate to do business with you. [They're like] 'Whatever you want, man! You can have 99 percent, we'll take one!' And I'm not saying that with happiness, because it's not easy running a record company. I'm also not saying that they aren't scumbags a lot of the time, because they are. "

But technology can buzzkill the alterna-star too: Crowdfunding the Pixies via fandom also brings a swarm of social networking irritations and/or privacy invasions. Interpersonal tensions decoupled Black Francis and bassist Kim Deal for a decade after that depressing fax. After another decade of reunion touring with Black Francis, guitarist Joey Santiago and drummer David Lovering, Deal decoupled again from Pixies 2.0 by abruptly bailing on recording sessions for the 14 new songs that comprise "EP-1," "EP-2" and others to come.

Tensions returned last month with Deal's replacement, the Muff's' well-received Kim Shattuck, after she scooped the band on Facebook by reporting she had been unceremoniously fired. Pixies 2.0's reinvigorating Kim 2.0 has since been replaced by another bassist -- A Perfect Circle, Zwan and Entrance Band bassist Paz Lenchantin, "a fan" who "knew all the songs" from first count, according to Santiago. "She's a quick learner," he told me by phone. "That first day, she just nailed it. She knew everything."

Black Francis is the first to admit that few will feel sorry for a rock star suffering fandom blowback after replacing one charismatic Kim with another. They will likely heckle him just as hard in the blogosphere if Paz is replaced down the line. (Even Santiago joked about being "replaceable.") It's all part of the new new new economy. That said, it's probably not surprising that the artist who screamed, "Do you have another opinion!?" on Doolittle's masterful "Mr. Grieves" is far from comfortable with the lightspeed immediacy of our oversharing new normal. He was disappointed that Kim Shattuck announced her surprising departure on Facebook, but it was on Twitter (via direct message) that she professed to me her love for the Pixies, despite the communication breakdown.

"I'm a fan of good songs," she wrote, mentioning the crossover antipop of "Here Comes Your Man" and the sci-fi lovesick "Velouria" as favorites. "When I like a song, I like it forever. Getting fired from the Pixies for no reason won't change that."

"The problem is, and I include myself in this, is that a lot of people get caught up in the social networking," Black Francis, itinerant confessional songwriter, told me days after Shattuck's unscheduled newsbreaking. "They got Facebook accounts, they got Twitter accounts. My God, everyone is expressing everything that is happening to them as the day goes on. But we didn't feel like it was necessary to say anything. It's not like we had a big fistfight onstage or something like that. We didn't really feel the need to say anything about it, or at least say anything yet about it. We were in Christmas mode, not really so caught up in the band stuff. We've been caught up in the band stuff all fucking year. We're on vacation."

Although he vented for many hilarious minutes about the back-and-forth with Kims Deal and Shattuck, Black Francis openly conceded that it is these emotional connections to the Pixies that have, as the decades pass, elevated the band to the upper echelons with influentials like Pink Floyd -- who taught us how the personal and the political can fracture music legends. But his worries that online clusterfucking can turn uglier in accelerated time are superseded by his admission that the Pixies wouldn't be where they are today without these existential tensions in the first place.

"I guess I should consider myself lucky we're that kind of band," he said. "There's a lot of emotional attachment. I think when there is a woman involved, there is more emotion involved. I don't know about you, but I feel more emotional about women, know what I mean? I went and saw 'Gravity,' and I probably couldn't pick Sandra Bullock out of a photograph but I'm emotionally attached to everything going on with her in that movie. What can I say? I don't know. People feel emotional about our band and its magical lineup, Kim Deal especially."

"Kim Deal only has to play one fucking note," he laughs. "She walks out there puffing a cigarette and everyone goes, 'Yeah! I wanna marry you!' That's the reaction, you know? I can scream my brains out, lay out all this pathos, expunge my soul in front of everybody, but they just go, 'Yeah right, that's a pretty good trick but where's Kim Deal?' I'm just saying."

Lately, Deal has been touring her own band the Breeders, the mostly female alternative to the (still) masculine alternative, whose foundational debut Pod grew out of her limited creative role in the Pixies. Deal's Breeders recently concluded full-album 20th anniversary performances of Pod's lasting follow-up "Last Splash," a crossover success the Pixies never achieved with their own generational classics. The superfan I am -- who followed Pixies 1.0 across California when they were a best-kept secret, who met his future wife at a Pixies concert -- hopes the less productive but always compelling Deal manages more new music of her own. Especially if she's going to pass up a unique opportunity, however complicated, to bend the Pixies' newer music to her defiant but catchy will.

Nevertheless, the Pixies are moving forward without her, and probably whoever else ends up on the wrong side of their new millennium's best-laid plans. Which is a wonderful thing. Fandom's ace card is longevity, and nothing the Pixies will ever make will diminish everything they have ever made. Those of us who were around in the earlier days, where there was no Wikipedia, Twitter and Facebook to track, follow and stalk anyone they talked to and everything they did, we fans desperately wanted to, and did, share the Pixies with an increasingly uncool world getting lost in hyperreal circularity ("picked up from dead things that you licked," Black Francis snaps sharply in "Bagboy") and environmental catastrophe. And if the ground's not cold, everything is going to burn/We'll all take turns, I'll get mine too, Black Francis prophesied in Doolittle's prescient "Monkey Gone to Heaven," and lo, it was.

After finally getting that recognition and power, we should be stoked that the Pixies care at all about trying to make new music together. "It's just silly not to be grateful," Santiago said. "It's the best fucking job in the world. Shut the fuck up. No one who's building a bridge is going to feel sorry for you, know what I mean? It sounds silly. You know, you got white people problems, but this is like rock star problems. Shut up. Know what I mean? Shut the fuck up."