San Franciscans assail a plan to charge private shuttle companies a small fee as a travesty. But it moved forward 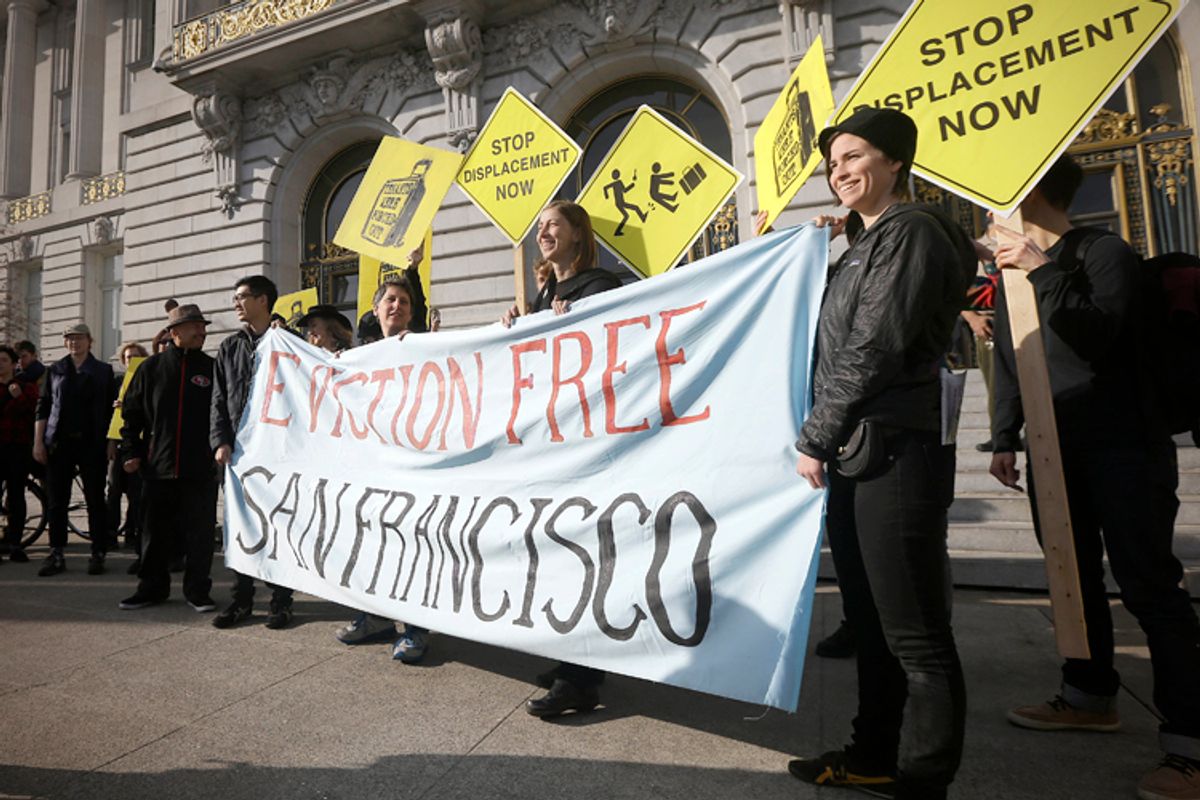 Activists protest outside of City Hall in San Francisco, Jan. 21, 2014. San Francisco officials are set to vote on a plan to start regulating employee shuttles for companies like Google, Facebook and Apple, charging a fee for those that use public bus stops and controlling where they load and unload. (AP/Jeff Chiu)
--

"This is class warfare," roared a representative of organized labor. "This is the privatization of public space!" And the people cheered. And the TV cameras rolled. And a thousand live-tweeters jolted into action.

And then the Board of Directors of the San Francisco Municipal Transportation Authority did what the smart money had assumed from the beginning it would do. The board voted to approve an 18-month pilot program that would test out charging fees to private commuter shuttles for the use of city bus stops. Henceforth, Google and all the rest will be paying one dollar per bus per stop. (For a company like Google, estimated MTA's Carli Paine, who presented the plan, the fee could add up to $100,000 annually.)

One might be tempted to say that only in San Francisco could a government vote on a parking permit program spur two hours of passionate public comment, complete with calls for the people to rise up, and repeated assaults on politicians for serving the corporate interest at the expense of the public warfare. (But Berkeley would probably get mad -- Berkeley could do six hours on parking, easy.)

The fact is that the Google bus public hearing circus was entirely predictable. The television cameras and the city supervisors and the full-court-media press and the scores of attendees -- the main hearing room was standing room only and the overflow room was also packed to capacity -- converged on City Hall Tuesday afternoon because Google's buses have become a proxy for fear and loathing of the tech-driven transformation of San Francisco. Because make no mistake -- the real target of ire for most of the speakers at City Hall was tech-driven gentrification, and not the particular method of transport employed to get workers to their jobs.

Of course, the political reality on the ground meant there was an obvious disjunction between the goals of the protesters and the mandate of the MTA. The people wanted justice. The MTA was trying to figure out the much narrower question of how to solve the technical problem of sharing city infrastructure with private transportation companies. The MTA also believes that state law permits it only to recoup the cost of operating a any parking program in fees, so there was no question about arriving at a correctly-sized pound of flesh to be extracted from the tech companies that might compensate for the negative economic impacts of the tech boom (even if such a thing were possible.)

Two city supervisors appeared at the meeting, presumably attracted by the magnetic lure of the television cameras. Supervisor Scott Weiner supported the pilot program, and declared that "blaming tech workers is not a solution to our housing problems." Supervisor David Campos expressed support for "not vilifying tech workers" but said "that does not mean not having a real conversation about the impact of Google buses."

The pilot program, said Campos, is "a proposal that simply does not go far enough."

Campos' message received more supportive hoots and hollers than Weiner's but it's hard to say what that means for the larger political climate in the city. Activists are drawn to hearings like these. Many of those who came to spoke were clearly experienced advocates on a wide variety of social issues. The handful of Googlers who showed up did not display the same expertise.

Indeed, Google may know how to organize the world's information, but the company isn't so great at getting dirty in politically fraught culture wars. The handful of voices of Googlers defending the pragmatic value of commuter shuttles fell flat. In several cases their testimony boiled down to basically begging the city not to force them to drive to work. In some cases, they embarrassingly repeated talking points from a leaked Google memo advising employees on how to support the commuter shuttle program.

Of course, it's possible that Google's presence was limited by the fact that there was little doubt as to how the MTA board's vote would go, so why waste time and resources showing up? There's your vaunted tech economy efficiency right there. One dollar per stop per bus is a price Google is fully willing to pay and the city's political establishment, for the most part, isn't willing to extract a higher price.

So there's your San Francisco tech culture war status up date. The critics are making a lot of noise, but it's not bothering the politicians, yet.