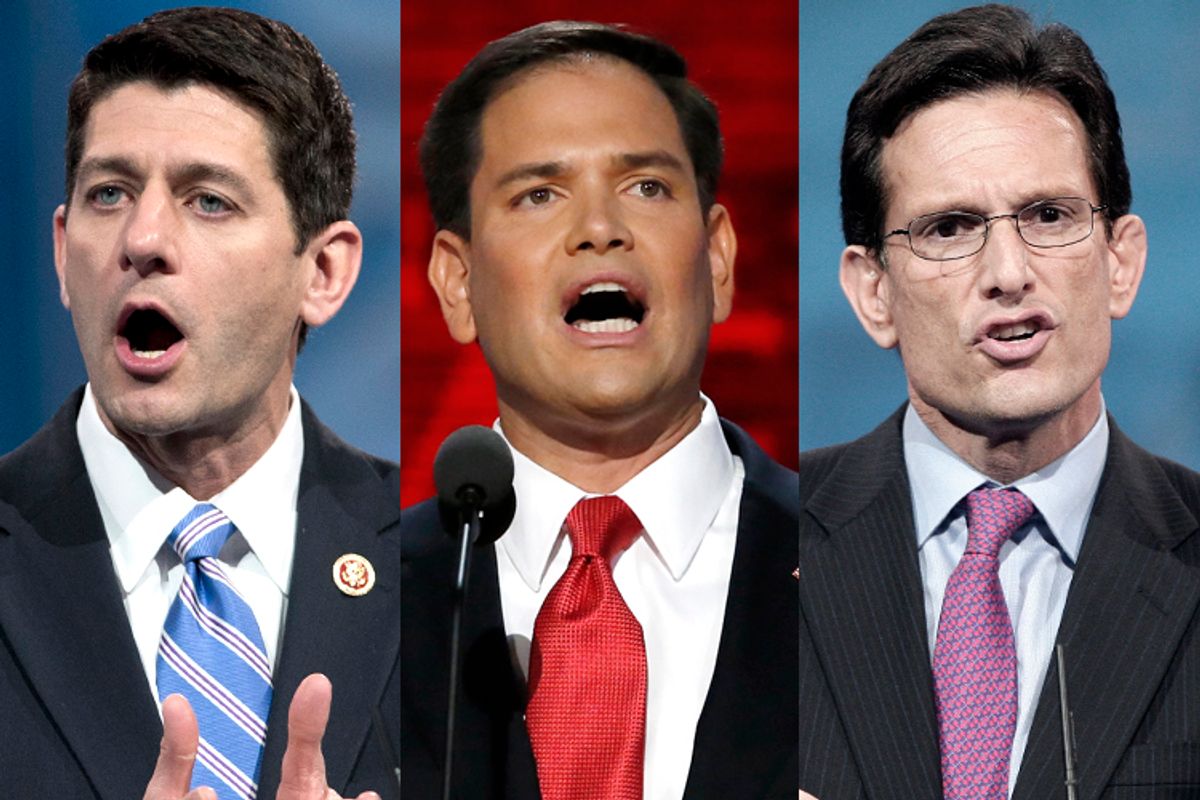 Back in December, just two months after the previous debt limit deadline forced Republicans to end their government shutdown without extracting any unreciprocated concessions from Democrats Rep. Paul Ryan, R-Wis., and Senate Minority Leader Mitch McConnell became the first two leading Republicans to predict that the GOP will stage yet another debt limit hostage drama.

McConnell's perfunctory assessment -- "I doubt if the House or, for that matter, the Senate is willing to give the president a clean debt ceiling increase" -- was particularly eye-roll inducing given how forcefully he declared an end to manufactured brinkmanship when the government reopened in October. "We’re not going to do this again in connection with the debt ceiling or with a government shutdown.”

It's been tempting to write off these recent expressions of denial as the defensive mantras of parents protecting their children from the truth about the Easter Bunny. After Republicans increased the debt limit twice last year without pocketing any ransoms it's pretty obvious that these fights have become heavily scripted Kabuki ensembles. Republicans say they want concessions in exchange for a debt limit increase, angle for said concessions until the deadline's just in the foreground, then relent at the last moment, while forcing Democrats to provide most of the votes.

I'm pretty confident the pattern will hold this time around, too -- but with one very important difference. Last time around Republicans entered the combined shutdown and debt limit fights completely clueless about what they hoped to extort, other than that they knew it should come out of the hides of Obama and his supporters. They floated a laughably comprehensive list of demands -- the entire roster of Obama accomplishments in exchange for a temporary increase in borrowing authority -- but then let it dwindle and dwindle until it disappeared altogether.

This time around, a shutdown is off the table -- the government is funded through September. Which means the fight will be centered entirely around the much more dangerous, but much less politically black-and-white debt limit deadline. And this time, I think Republicans will have a single, concrete ransom demand.

When Obamacare first launched and Healthcare.gov's initial failure delayed millions of enrollments, conservatives celebrated, because they believed worse-than-expected enrollment to be synonymous with an actuarial "death spiral" and the law's rapid collapse. Not so fast, the law's supporters cautioned. First, don't forget that the open enrollment period is six months. But then keep in mind that the law outfits the exchanges with shock absorbers -- known as reinsurance, and risk corridors -- so that if first- and second-year enrollments lag behind expectations, insurers will be insulated from unexpected losses and the need to jack up premiums.

This came as a tremendous disappointment to conservatives, most of whom had never heard of reinsurance and risk corridors -- and who, worse, had blithely convinced themselves that Obamacare was already collapsing because its authors had been too inept to backstop their own creation.

But they regrouped quickly. The right's basic approach to fighting Obamacare is pretty simple: Since full repeal is impossible conservatives take aim at the embedded provisions that make the law viable. This explains their obsession with delaying the individual mandate. And it explains their new obsession with repealing the risk corridors. But the individual mandate is and always has been unpopular, whereas nobody's ever heard of risk corridors. So to make the risk corridors just as unpopular as the mandate, conservatives agreed, in an unusually brazen and public way, that they would lie about that provision and dub it an "Obamacare bailout." Linking the word "Obamacare" to the word "bailout" serves approximately the same role in building support for the fight against Obamacare as the insinuation of an alliance between Saddam Hussein and Osama bin Laden served in building support for the Iraq War. And it's only slightly less dishonest.

Risk corridors are a bit complicated in design, but essentially reflect an agreement between the government and insurance companies participating in the exchanges that the government will share in unexpectedly large losses, but that the government will also recoup large insurance company windfalls. It is for that reason an inducement against insurers setting premiums too high or too low and against cherry-picking healthy customers. In a very bad year for all insurers -- if Healthcare.gov had failed entirely, or if a plague sweeps the country this spring -- the government would be on the hook for a fair amount of money. Under normal conditions, risk corridors function as a transfer from carriers with healthier clients to carriers with sicker clients. But in an unexpectedly good year for insurers, the government would recoup its losses. Government analysts thus expect the risk corridor program to be budget neutral over its three-year lifespan.

It's thus only a bailout in the same way that possessing a bottle of Advil is a catastrophic drug overdose. But that hasn't stopped conservatives from plotting in broad daylight to frame it as a bailout anyhow, in a cynical campaign to build support for its repeal and, as Ramesh Ponnuru wrote, in mustache-twiddling prose, "raise premiums [making insurance] plans even more unattractive than they already are … Obamacare would, in other words, become even less likely to succeed than it already is."

He might as well have said conservatives won't abandon their Obamacare sabotage campaign unless George Soros gives them one zillion, fafillion dollars.

But Ponnuru's relatively late to the party. This idea really morphed from a secret plot to wreck Obamacare into a Bond villain audition on Jan. 2, when, after finally discovering these dreaded risk corridors, Charles Krauthammer advised: "Attach the anti-bailout bill to the debt ceiling. That and nothing else. Dare the president to stand up and say: 'I’m willing to let the country default in order to preserve a massive bailout for insurance companies.'"

Which is exactly what I think Republicans will do. Treasury Secretary Jack Lew announced on Wednesday that Congress will need to increase the debt limit before the end of February, weeks earlier than expected. House Speaker John Boehner, who declined to demand any debt limit ransoms just last week, sent his spokesman Michael Steel out to announce in response to Lew that "a 'clean' debt limit increase simply won’t pass in the House."

So it's pretty clear where Republicans are headed. Sen. Marco Rubio, R-Fla., even authored a "bailout" repeal bill last year. And they'll probably get their talking point. But for anyone reading who isn't in the business of laying fraudulent intellectual groundwork for partisan campaigners, you can be absolutely secure in the conclusion that this is a huge scam -- indeed that almost everyone who crashed the bailout rhetoric party knows they're lying.

Why? Because they've since learned that Medicare Part D has a risk corridor program as well! And it's dawning on them that they must now square their apocalyptic bailout rhetoric with the fact that some of them helped design that very entitlement a decade ago.