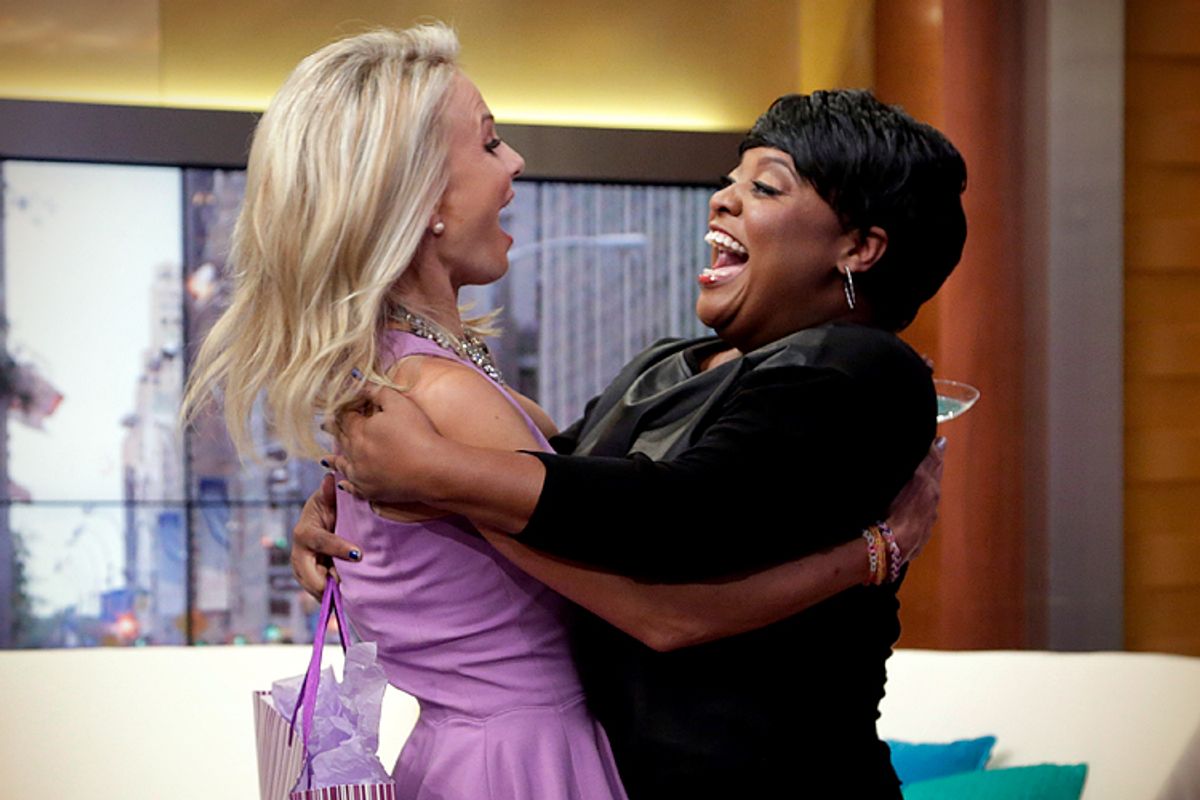 Sherri Shepherd, the co-host of ABC's talk show "The View," apologized yesterday for her remarks in an interview on the Fusion network in which she had claimed to be labeled anti-gay unfairly. "I might not agree with your lifestyle, but I love you," Shepherd said in the interview, which is available on video here.

She also asked, in the interview, that people "respect how I feel" without going into detail about how she feels today, but noting that she had been raised to believe "you're going to hell if you're a homosexual." The disingenuousness of her apology was enough to make one nostalgic for the relative openness and purposefulness of arch-conservative former co-host Elisabeth Hasselbeck.

Here's the thing: What Shepherd said was not on its face offensive -- the language in her Fusion interview was mystifyingly coded and weirdly legalistic enough that her apology, which explains that she was relating her personal history and evolution of her faith, is substantively difficult to contradict. She claimed in an apology, which she made no attempt to hide was being read from a Teleprompter, that her "beliefs have evolved significantly as my own personal relationship with Christ has increased." That's all well and good; she has the right to her beliefs and her faith. But it's remarkable that she gave an interview, and then apologized for that interview, all the while saying nothing at all.

What is the takeaway from l'affaire Shepherd? The talk-show host either does or does not think gay people are going to hell, and she feels either more or less fervently that gay people are sinners as her religious faith has deepened with time. She's learned valuable information over the course of her "View" tenure, it would seem, as early on she'd been pilloried for her flawed reasoning in her support of Proposition 8 and her remarks on transgender issues ("Not in my house! My son isn't putting on dresses!"). This was also the period during which Shepherd famously said she didn't know whether the Earth was round or flat.

After Hasselbeck's departure, last year, for Fox News, Shepherd is the only remaining conservative on "The View" -- and proof positive that the show has outlived its usefulness. Like Barbara Walters, who will cut short a conversation on the supposed free exchange of ideas if it threatens to alienate a potential guest, Shepherd has an instinct for self-preservation. Unlike Walters, this leaves her with nothing to say. "I might not agree with your lifestyle" is a weak hypothetical -- no one can accuse Shepherd of not agreeing with the gay "lifestyle," let alone not having a heart full of love for all. She made no policy recommendations and expressed nothing but a desire to be understood in a hypothetical disagreement she's unwilling to actually engage. She signals disagreement without indulging it.

Hasselbeck didn't play these sort of semantic games. Admirably (in a sense), Hasselbeck put a smiling face on conservative talking points -- she was actually willing to get into it over the details. Her details were often fudged or wrong, but first Rosie O'Donnell and then an emboldened Joy Behar were there to actually debate. The biggest fight Hasselbeck ever found herself in on "The View" was sparked by Hasselbeck's refusal to defend O'Donnell in a debate over whether O'Donnell had called American troops terrorists. That was ugly, but it was also deeply real: There were stakes for the show (O'Donnell never returned) and in the issues at play.

"Defend your own insinuations! Defend your own thoughts!" Hasselbeck told O'Donnell. Shepherd refuses to do that, or even to acknowledge she's insinuated anything at all. All of her cohosts defended her, and the conversation, a closed sign connected to nothing actually important in the culture, rolled on. The best thing that could happen to a show whose hosts seem alternately checked out or strenuously avoiding talking about anything would be to bring in a host who is actually willing to go there, to say why she might disagree with the gay "lifestyle" rather than just hint at it.

On "The View," Jenny McCarthy won't even really indulge her fatal anti-vaccine beliefs, because that would mean a debate; she whiles away the 11 a.m. hour  talking about sex and relationships. There's no debate at all. Who is watching this, and why? In the era of polarization on the left and right sides of the cable dial -- to which Behar, briefly, and Hasselbeck, permanently for now, migrated -- "The View" has chosen sunny, meaningless amity.