A soldier's exorcism: "He could feel hot Jesus blood coming down over his face"

Caleb lost eight friends in Iraq. When he returned home, they haunted him -- as did a demon he called the Destroyer 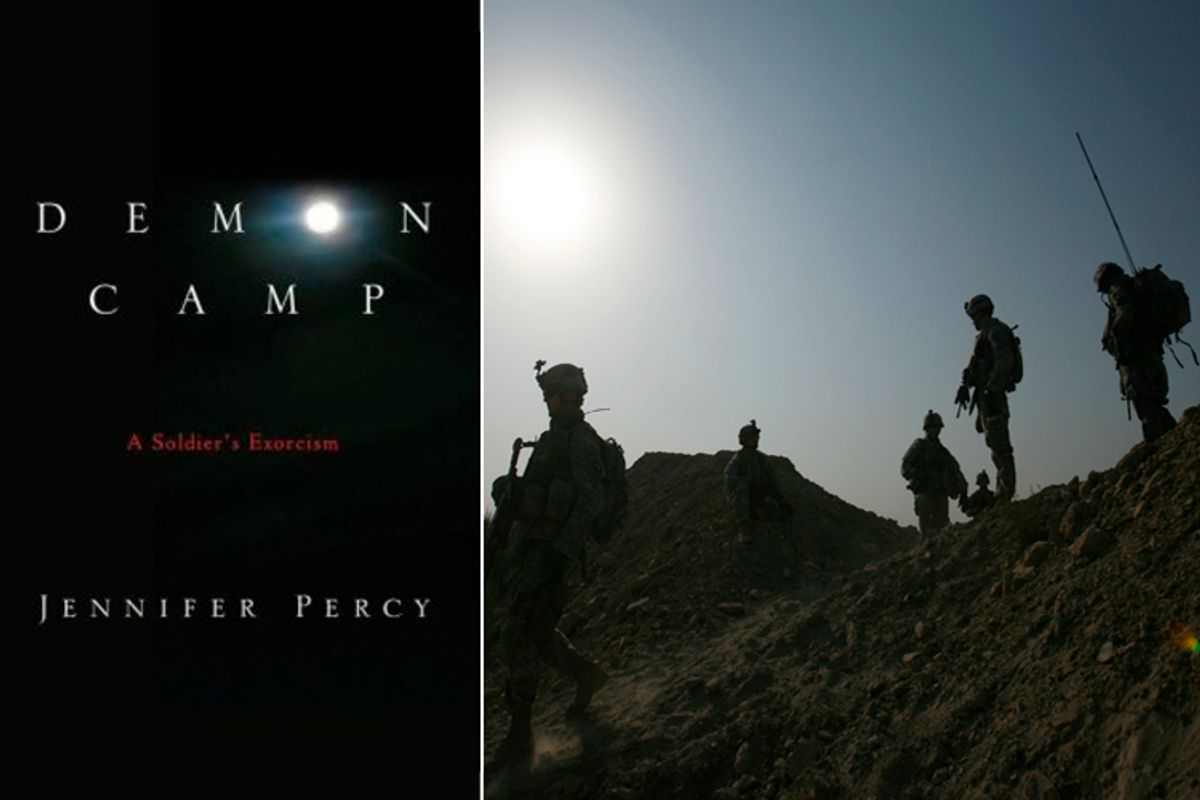 Before he met Eden, Caleb’s time with Wombly gave him headspace enough to hire eight men from flyers stapled to telephone poles. He started a construction company that served rich people in the Atlanta suburb of Buckhead, fixing unnecessary technology like voice-automated torchlights for driveways, refrigerated wine cellars with video security. He was running a profit until one of the workers stole all the money and ran away. It wasn’t much, but it was everything. He worked three months with no pay so that he could give paychecks to the rest of his men.

Once again, he’d lost everything.

Caleb quit the construction job and started work at Canton Chevrolet. Quit that too. Started work at Meineke. The cement there was always cool and he liked the way it felt on his skin when he pressed his hands on the ground to lower himself beneath a truck. He knew the inside of a truck as he knew a body; he kept it alive, seeing the complicated map of silver pipes and wires as a delicate surgical task. Sometimes, when the rain would start with the quick, static sound of an electric fuse, he’d push himself from under the truck, rising to watch the rain fall on all four sides of him, enclosing him in a soft blue world where he felt safe. He worked long hours until the sky turned orange and he returned home, still renting a room from his buddy Ryan.

On a Thursday, a man stepped into his office at Meineke. He told Caleb to shut up because he had some things to say. Caleb folded his arms, leaned back in his chair. “Do I owe you money? Did one of my guys screw you over?” The man told Caleb he wasn’t there about his business. “Your business is a piece of shit,” he said. Instead the man offered Caleb enough money to take a flight to Rhode Island the following week to attend a conference on theophostics—god (theo) and light (phostics)—where people came to be delivered from phobias, addictions, disorders, post-traumatic stress.

Caleb told the man he didn’t want his money. The man left it anyway. An envelope of cash. The man told Caleb he needed help. Many years later, Caleb would say that this man was sent by God.

At the time, Caleb owed money for rent but he did what the man said and traveled to Rhode Island anyway. At a session, the leader fluttered her hands around Caleb and told him he was holding on to darkness. She brought Caleb to the center of the room. He stood under fluorescent lights, bowed his head. “Have you ever heard anyone pray in tongues?” the woman said.

She prayed in tongues, under her breath, reminding Caleb of those languages he’d never understood in the Middle East and Afghanistan. “Now, Caleb, do you believe in Jesus Christ?”

“Well, sure.” He was born into a family who spoke of God at warm meals.

“Close your eyes and tell me what you see.”

“I see the back of my eyelids.”

“Father, show him what he needs to see!”

And he could see all the way back to when he was thirteen years old. It started with the guys burning in the helicopter, and the flesh coming off their skin. The day his ex-wife, Allyson, called him a murderer. The Black Thing telling Caleb he needed to die. All the horrible things that had happened in his life.

“Do you want to keep all those memories?”

Everything went black. He could remember what happened— he knew his friends had burned and died—but he couldn’t feel it. The emotion was gone.

Caleb looked at the silent, weeping crowd. A gathering of people also seeking help in this world. “I’m only twenty-five years old,” Caleb told them, “but I feel like an old man.” He wept too. Something he’d never done in public view.

The group’s leader encouraged Caleb to talk in detail about the war, his dead buddies, and the apparitions that followed. A Vietnam veteran named Troy was in the audience, listening. When it was over, Troy introduced himself as a healer who sees and speaks healing to the deep hurts in the hearts of men. He had small, dark eyes. After Vietnam, he served twenty years as a firefighter and nineteen months as a trauma paramedic on combat posts in Afghanistan.

“Theophostics gets the little thing,” he said, “but it’s not going to make the big things go away.”

Troy said he knew how to get rid of the big thing. The thing that was following Caleb home from the war.

Troy described a place in South Georgia where the layer between heaven and earth is very thin. He’d traveled there two years ago to get rid of the Black Thing. He wished he’d done it earlier. “It’s called deliverance,” he said. “It works wonders.” Troy offered to stop by Caleb’s home and drive him to Portal. He’d take him through deliverance.

“Other veterans had done it,” he said. “More are going to do it.”

Troy showed up at Caleb’s house the next day and unloaded a bundle of stakes from the trunk of his car. He wrote Scripture on their sides. Longhand with a permanent marker.

And he drove the stakes into the ground. “Now,” he said, “nothing demonic can come on this property.”

A week later, they drove together to Portal. Two hundred miles of night road while Troy spoke quietly of demons.

The town was no town at all really. A region of pine and dust and a violent history where turpentine hunters once distilled resin, and woodriders with bush knives hacked at undisciplined workers until they bled like hogs.

Off Highway 26, down a long washboard dirt road, Troy pulled up to a trailer where a minister and his wife lived alone.

They sat Caleb down in a room and all these Christian people surrounded him in foldout chairs. No one said anything. They were writing things down on pieces of paper.

The minister saw an angel fighting the Destroyer. The angel was worn out and tired and all the hair had been ripped out of its head.

Caleb felt a burning sore rip open on the back of his neck. It felt as if the flesh was coming off and something was being pulled up his spine toward the burning. They prayed for the blood of Jesus. He could feel hot Jesus blood coming down over his face. Everyone in the room started freaking out. A glowing thing moved down his legs. They said they’d never seen that before.

The minister reached his hands into the air and closed his eyes. “Caleb,” he said, “you have a reason to be alive.”