Football's glaring inequity: Feelings are for fans, not for players

We're allowed to yell, get drunk and break furniture, but athletes can't talk about being the best 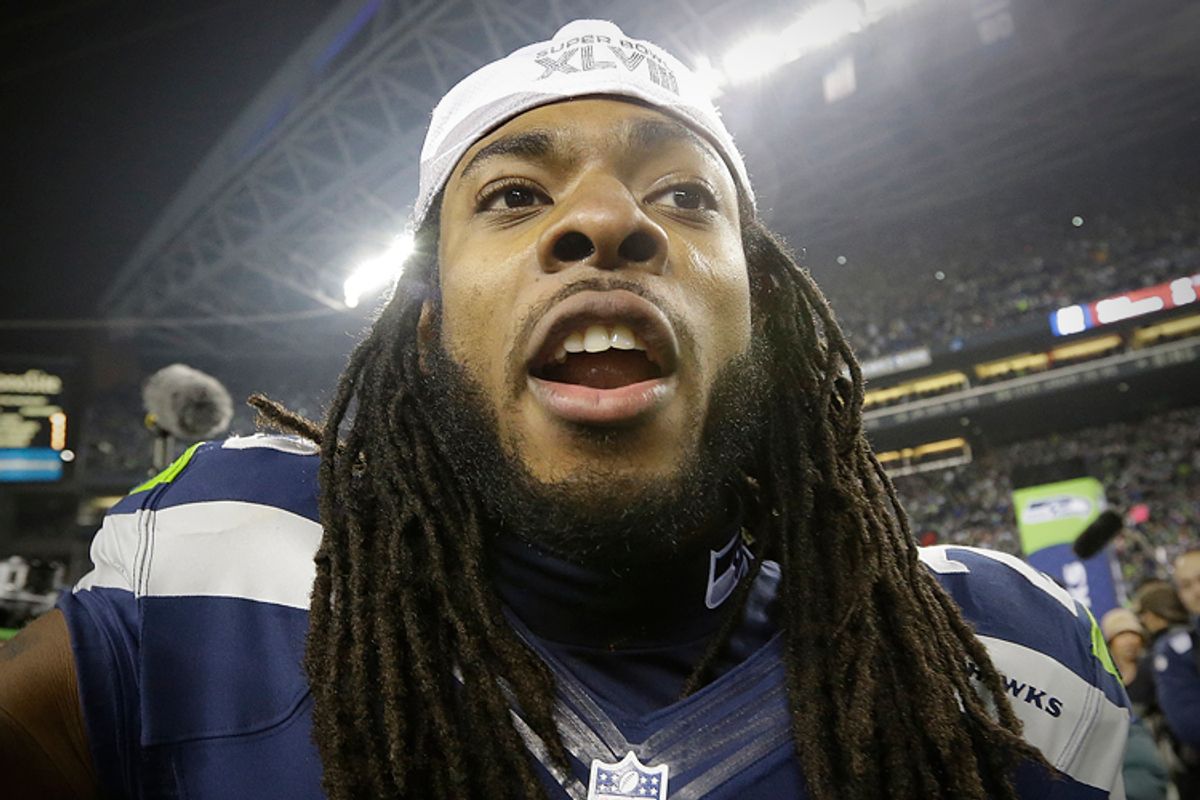 For the record, Richard Sherman doesn’t need my defense. His many accomplishments would exist whether I validated them or not. As he so eloquently dictated last year to Skip Bayless on Bayless’ own show, ESPN’s "First Take," he is “better at life than you.” I believe him.

By now, the infamous Erin Andrews interview has been talked about at length, much more than Sherman's dazzling game-saving defensive play against the San Francisco 49ers’ Michael Crabtree to punch his team’s ticket to the Super Bowl. I’m not really interested in rehashing what has been said about the video other than to say the Twitter backlash — the bantering and bullying — seemed on par with just about every swell of trending Internet fodder that rises and crests on an almost daily basis. If you are looking for some good stuff that has been written already, you can check it out here, here and here. Also, if you are interested in reading Sherman’s own thoughts on what transpired, go here. He also held a press conference on Wednesday that's worth watching. There is a method to his madness (though I would hardly call him “mad” or any derivative thereof). I can’t say the same for his legion of trolls.

I watched the game at a bar in New York where nearly everyone was from the Bay Area (California). It felt like home: belligerent fans belched obscenities toward the television screen, patrons flaunted their red and gold around the bar and high-fived following every 49er first down. After each 49er score the bar erupted with joy; every Seahawks conversion deflated the high in the room. I cheered only enough to remain unnoticed and blend in with the crowd. I drank my beer. Then I drank more and more, like any good American football fan. I was consumed by the game. Even more so when you consider I was watching with more than those inside the bar.

Since I grew up in Northern California, in and around the Bay Area, you might guess whose side I leaned toward. You might also imagine the barrage of posts I encountered before, during and after the NFC Championship on my social feeds. Though I tend to refrain from scrolling endlessly through my timeline — and, in many instances, I go so far as to unsubscribe to posts that congest my feed — Sunday’s game was impossible to escape.

Following the epic Sherman interview, many at the bar became infuriated: I watched a fan rip the red cap from his head, walk outside, and hurl it into the intersection, only to follow up that emotional release by sparring with the side of a brick wall; his friends let it ride. The rest of the dejected and downtrodden took to social media. I simply watched the carnage, the same way I watched NaVorro Bowman’s knee disassemble moments earlier (ad nauseam).

An incoming text message shed more inglorious wisdom on the night’s events: “Congratulations Richard Sherman, everyone in America outside of Washington wants to see you lose. Not that they care.”

The text came from a person whom I’ve never had a reason to believe walks around with malice in his heart, the kind that we believe is ingrained in the DNA of all racists, bigots and assholes.  He is about as stereotypically “square” (as we used to call it in high school) as they come. He goes to school. He loves his wife and his family. His personality can light up the room. Hence, his text seemed a bit out of character for the person I know and love. My guess is he blacked out, and his blind faith in his squad was in control of his iPhone. He's just a fan. Still, those two sentences were a depressingly accurate snapshot of the effect an institution like the National Football League can have over its followers and the American consciousness. The NFL dictates the rules of decorum and defines values, sportsmanship and acceptable behavior. We love the politics of respectability.

I read the message and dismissed it. What a hater, I thought. Ironically, that spirit of dismissal, of apathetic disregard for others, is the exact opposite of what Richard Sherman embodies. He zealously applies effort in his endeavors on the field and in his community. His upbringing and the odds he overcame to escape Compton (which he hasn’t forgotten), graduating second in his high school class, earning a bachelor's degree from Stanford (he's currently working on a master's), and becoming the best corner in the league are well-documented (Google, seriously). Yet, we care about how he packages all of this. If his actions don’t measure up to an objective set of established acceptable decorum, we eagerly dismiss it all. The rest of us don’t understand — or even try to comprehend, for that matter — what drives the hate. I am not immune.

I, too, am a fan. My team, the Baltimore Ravens, failed to make the playoffs this year despite having won the Super Bowl a season ago. I’ve been known to yell at the television, talk smack at parties and gloat from time to time. I may have even broken a chair, WWE-style. Furniture doesn’t stand a chance against a fucking lunatic fan supercharged with adrenaline. Something must have come over me because that’s not the “real” me.

And yet it seems reacting to a game is only the right of those on the outside peering in, not for those on the inside gazing out. The rules governing the game are limited to its employees, not its patrons. Which is to say, I am allowed to act like a human being with feelings, and Richard Sherman is not. Cheer the gladiator, but don’t let him taste victory. That is a violation of the fan/player contract. We love watching Maximus.

What the reaction to Richard Sherman showed me is that rooting is a fan’s privilege. And it's a benefit players will never get to see.