America's chicken-wing disgrace: Why you should skip this snack on Super Bowl Sunday 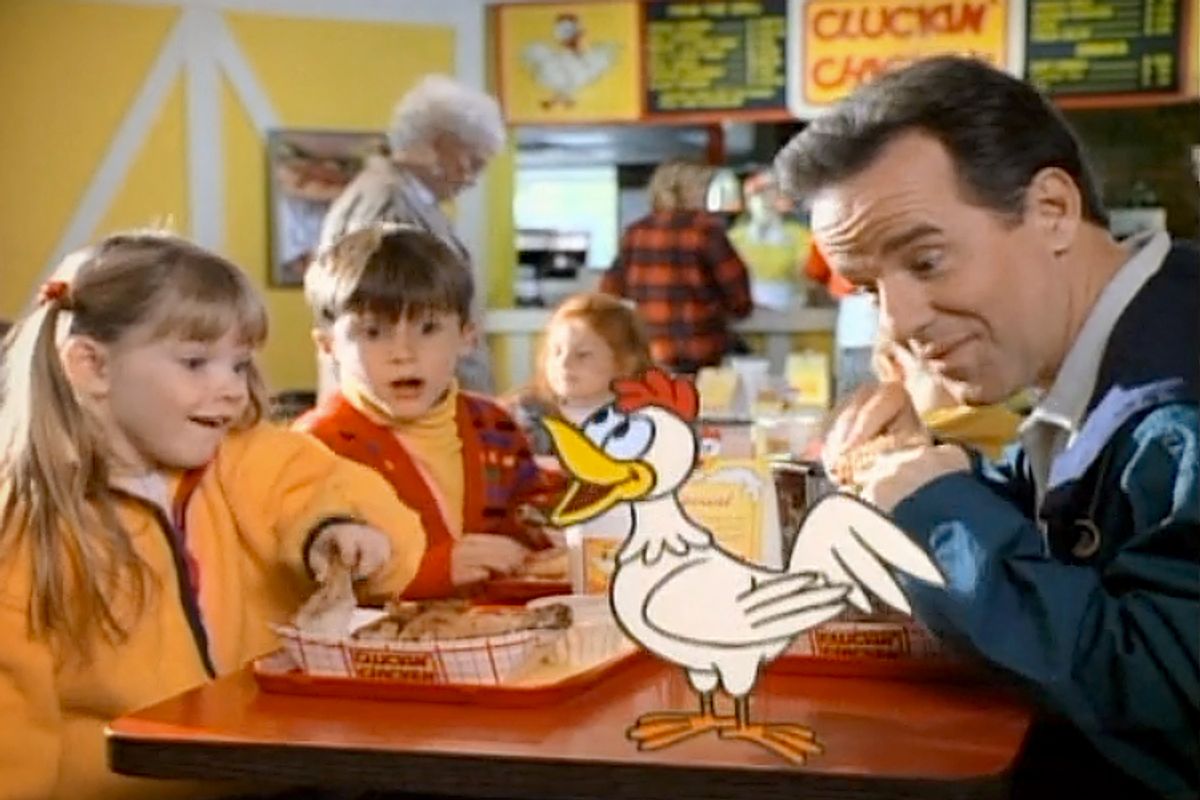 Just in time for Superbowl XLVIII – that high holiday of chicken wing consumption – the National Chicken Council has come out with its 2014 Wing Report. Among its many exciting findings (51 percent of wing-consuming adults prefer ranch dressing over blue cheese; women are just as likely as men to prefer Buffalo-style flavoring), the report touts this mind-boggling stat: During the course of Sunday’s game, American consumers will devour a total of 1.25 billions wings. That’s up from last year’s estimate, of 1.23 billion, and evidence that “The Great Chicken Wing Shortage of 2013” is officially over.

Ironically, all this industry-promoted fuss is being made over what used to be one of the least desirable parts of the chicken. Wings, the unwanted byproduct of poultry’s choice cuts, began to appear on bar menus precisely because they were so cheap and readily available. Now, according to the NCC, they’re second in price only to the boneless, skinless meat of the breast. In the United States, the chicken wing franchise industry is growing at a faster rate than frozen yogurt chains. At some point in the past 50 years, chicken wings became synonymous not just with Super Bowl Sunday, but with American food culture as a whole.

That should be our first warning sign. Chicken wings don’t just represent a quintessentially American way of eating. In many ways, they epitomize the ways in which American eating is broken.

To begin with, some basic math: Chicken wings are divided into three parts, two of which we consume as “wings” -- the “drummette,” a mini-drumstick that attaches the wing to the body, and the flat, two-boned middle segment. The wing tips, unpopular in the U.S., are usually shipped to Asia. Every four wings in your typical bucket, then, are equivalent to one fully grown chicken.

Those in the wing industry like to quip that, until science finds a way to invent a six-winged chicken, that’s all we’ll be able to get out of them. Wings are, however, getting bigger – the result of efforts to raise fatter, more profitable birds. This ends up being problematic for sellers, who are suddenly serving more meat on the same number of wings. In some cases, restaurants have begun serving wings by size instead of by number in order to keep the price down. But until that becomes common practice, more wing consumption will require more dead chickens -- a particularly cringe-worthy calculation for those for advocate abstaining from meat altogether (and who, when contacted by Salon, were quick to recommend vegan substitutes).

Even those who are OK with eating some meat might want to pay attention to just how many dead animals Sunday’s wing binge requires: about 312.5 million dead chickens, if the NCC’s figures are correct. The rest of the bird will be eaten or otherwise put to use, too (more on that later), but animal rights advocates argue that thinking of chickens only in terms of their parts obscures that massive death toll. Andrew Gunther, the program director for Animal Welfare Approved, an NGO that independently audits and certifies family farms that meet its high standards for animal welfare and environmental sustainability, put it this way: “We’re almost at a tipping point where we use an animal for its bits and forget, in theory, the whole animal.”

So when the NCC boasts that the number of wings eaten this year will be “enough to put 572 wings on every seat in all 32 NFL stadiums,” we could easily adapt their example and visualize, instead, 143 chickens crammed onto each and every one of those seats. Contrast that to all that can be done with the purchase of one, whole chicken: Its prime cuts can be enjoyed as the centerpiece of a meal (and its four wing segments eaten while the game plays); the less-great parts can be added to dishes that require chicken; and the rest can be tossed in a pot to make stock.

In order to meet the rabid demand touted by the NCC, poultry plants need to be extremely efficient. And efficiency, for the meat industry, often comes at a tremendous cost to human health, the environment and animal welfare. Antibiotic resistance, arising in part from the widespread use of the drugs in commercial livestock, is a growing problem that’s yet to be properly addressed. The USDA’s plans to roll out a new, sped-up poultry inspection process is only the most recent example of what can end up being missed in the interest of speeding up processing lines by 20 percent: namely, “tremendous” chunks of feces left on the meat headed to grocery stores, and birds inadvertently boiled alive.

Selling chickens by the wing -- or the breast, or the drumstick -- only magnifies the worst aspects of these bad practices, said Gunther. There are a number of factors increasing the odds that a chicken will be unsuitable to being sold whole, and all stem from the nasty practices associated with factory farms. Improper catching and handling methods lead to broken legs and wings; lesions and pustules develop from the birds’ being crammed into tiny cages; and crowded conditions promote the spread of disease.

When farmers slow down their production enough to ensure animal welfare, downgrades are far less likely to occur -- meaning any wings you buy on game day are unlikely to have come from such a place. Will Harris, the president of White Oaks, a fifth-generation farm certified by AWA, boasts that it slaughters only 500 chickens per day, instead of the hundreds of thousands that pass through industrial facilities. And raising the birds to size without the benefit of selective breeding or the use of hormones also takes longer. When the industry is at its most efficient, it can raise a 5-pound broiler in just five weeks. In contrast, Harris said, “it consistently takes us 12 weeks to raise a 3- to 4-pound bird.” He explained to Salon that the farm only sells whole birds, both because it’s more profitable, and also because their slowed-down practices enable them to.

“I would go broke trying to raise enough birds to just sell the wings to everybody that wanted them,” Harris added. “What would I do with all of those legs?” Wings from White Oaks, and other farms like it, therefore are very unlikely to end up in buckets on game day.

Industrial farms, of course, aren’t just raising birds for their wings and then throwing out the rest. “We like to say nothing of a chicken is wasted except for the cock-a-doodle-doo,” NCC economist William Roegnik told Salon. Bones are sent to plants that separate off the remaining flesh; that “mechanically separated chicken” goes on to fill hotdogs. Chicken feet used to be sent to rendering; more recently, the industry has discovered a market for them, also in Asia. But this kind of waste-not distribution only works for the big guys.

The NCC also has its own set of animal welfare guidelines for poultry processors, but they’re completely voluntary. Roegnik explained that the council relies on consumers interested in best practices to demand that companies adhere to them. But those demands -- for both more wings and more sustainable practices -- seem irrevocably at odds with one another. Creating a market in which the individual parts are prized over whole birds, Gunther worries, destroys the economic incentive for not allowing such things to happen.

Perhaps Super Bowl Sunday isn’t the best opportunity to point out the wholly unsustainable nature of this type of consumption. We are, after all, talking about a free-for-all feast of excess rivaled only by Thanksgiving, and an event during which advertisers are willing to pay $4 million for 30 seconds of consumers’ attention. But those 1.25 billion wings should make anyone who cares about creating a more ethical, sustainable meat system take pause.

And those vegan wings? They’re really not so bad.