"My Life in Middlemarch": How great books shape us 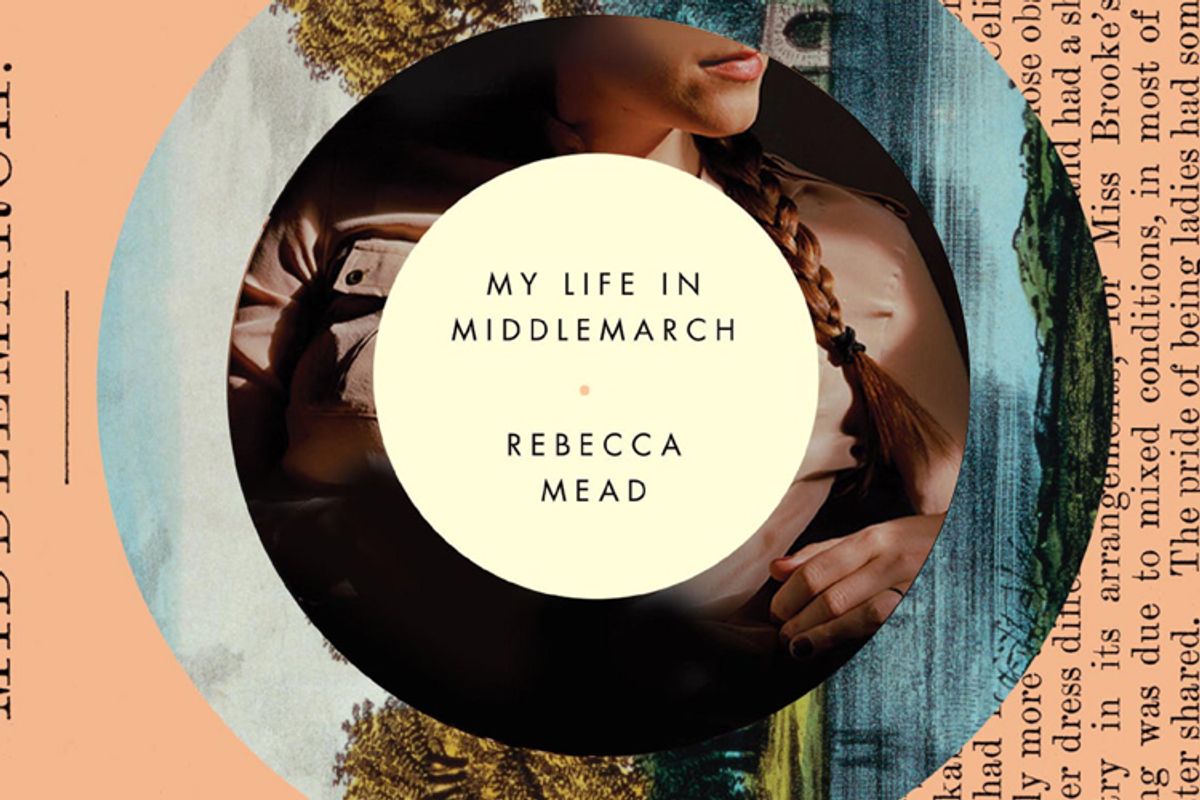 But then there are the novels, and if I can't quite agree with Rebecca Mead, who in her new book "My Life in Middlemarch," characterizes Eliot's landscape descriptions as "sensually precise," there are nevertheless few writers so masterly at describing how landscapes and experiences and other people make us think and feel. Eliot is the Rembrandt of our interior lives, and there have been few novelists since who equal her in that.

Mead first read "Middlemarch" as a restless 17-year-old coming up in a provincial seaside town in southwest England. Her mind was ravenous for books and ideas and the wide world outside, which she hoped to reach by way of Oxford. Thirty years later, a staff writer for the New Yorker, a stepmother of three boys and the mother of a son of her own, Mead returned to Eliot's masterpiece, not for the first time, to consider how her understanding of it has changed over the years and how the novel has changed her.

"Middlemarch," unlike most novels of its time, begins with a marriage -- of the idealistic young Dorothea Brooke to Edward Casaubon, a scholar some 20 years her senior -- and also concerns itself with a second marriage, that of the ambitious doctor Tertius Lydgate to the town beauty, Rosamond Vincy. The town in question, Middlemarch, is as provincial as the one Mead grew up in, and is undergoing profound changes caused by a political reform bill enacted in 1832.

Both Dorothea and Lydgate want nothing more than to make a difference, to use the modern parlance. He intends to modernize medicine, a purpose that would certainly save lives, while she believes that she can help her husband in writing a great work (a tome to be called "The Key to All Mythologies") and in the process learn from him. Both marriages are disasters; Mr. Causabon turns out to be a stalled, dried-up pedant, and Rosamond, whom Lydgate imagined as the Victorian ideal of the "Angel in the House" -- decorative, "docile" and comfortably incapable of comprehending his own "high musing and momentous labors" -- is both superficial and phenomenally stubborn, insisting on a standard of living her husband cannot afford unless he becomes a trivial society physician.

There's a lot more going on in "Middlemarch" than that, but the two bad marriages are what you notice if, like Mead, you're a brainy young woman who wants to make something of herself and whose knowledge of life comes mostly from books. Eliot herself -- born Mary Ann Evans, the daughter of a Midlands estate manager -- was once just such a girl, and many readers first encounter "Middlemarch" when they're making the same sort of life decisions that confront Dorothea and Lydgate. "My Life in Middlemarch" follows both Eliot and Mead as they obtain their educations and take their hard knocks from the world, while Mead explores which parts of Eliot's life and social circle may have inspired parts of the novel.

Despite coming of age when a formal university education was forbidden to women, Eliot became a distinguished journalist, intellectual, translator and general woman of letters in London. She lived for a while in the rather scandalous household of her employer at the Westminster Review, John Chapman, along with his wife, children and mistress, the children's governess. With the philosopher Herbert Spencer she engaged in what Mead calls a "quasicourtship"; the two were close friends until Spencer rather tactlessly informed Eliot that he could never be in love with her. "Physical beauty is a sine qua non with me," Spencer later wrote in an apparent reference to the affair; "as was once unhappily proved where the intellectual traits and the emotional traits were of the highest."

"I can't pretend to be above caring about Eliot's physical features," Mead admits with an engaging frankness. A writer's looks may make no difference in the appreciation of his or her work, but when the writer is a woman living in a society where women have few vocations beyond marriage, her looks can certainly have a significant effect on her life. Nevertheless, I can recall a college lecture in which Eliot's homeliness was presented as the shaping factor in the writing of "Middlemarch." This despite the fact that by the time Eliot began the novel, she had found an ideal partner in George Henry Lewes and had been living with him for over a decade. They were unable to marry (Lewes' legal wife had abandoned him and his three sons), and their cohabitation caused several of their more respectable acquaintances and relatives to shun them, but Lewes and Eliot adored and supported each other for 24 years, forming what the poet Robert Lowell called "Victorian England's one true marriage."

If Eliot had been pretty, she might have married the selfish and persnickety Spencer, in which case we might not have "Middlemarch," as it took Lewes' loving encouragement to persuade the wary Eliot to try her hand at fiction. In that respect, I suppose Eliot's looks did have a determining effect on the novel, but not in the way my college professor meant. As Mead frames it, Spencer was part of Eliot's "education" and their relationship "informed her understanding," an understanding whose full depth and breadth were deployed to write "Middlemarch."

Each of the chapters in "My Life in Middlemarch" take up an aspect of the novel, an aspect of Eliot's life and an aspect of Mead's life to illustrate the way these three things interpenetrate each other. This method achieves its most exquisite effects in the later chapters. In one, Mead decides to read through all the letters sent to Eliot by a sycophantic, even "stalker-like" young Scotsman who later became the editor of a volume titled "Wise, Witty and Tender Sayings, in Prose and Verse, Selected from the Works of George Eliot." Mead uses this incident to gently dissect the unfortunate tendency (as common now as it was in Victorian times) to view fiction as a source of life lessons and inspirational advice.

As Mead points out, this is just about the worst way to approach Eliot and her work. If Eliot had a "credo," Mead explains, it might be best expressed as "If I really care for you -- if I try to think myself into your position and orientation -- then the world is bettered by my effort at understanding and comprehension." Eliot's novels are meant to extend her readers' sympathetic imagination and invite them into the skins of her characters, something that can't be achieved by cherry-picking mottos. By committing herself to sit down in a Scottish library and read all of the young fan's many letters to Eliot, Mead made herself exercise her own sympathetic imagination, extending and expanding it until she recognized the lonely, yearning spirit inside this initially "repellent" person. This, in turn, enabled her to grasp why Eliot patiently indulged him.

Best of all is the chapter where Mead reconsiders what she once found the least interesting relationship in "Middlemarch": that between Rosamund's rather feckless brother Fred and his childhood sweetheart, Mary Garth. When Mead first read the novel, "I had only vague notions of what I wanted from romantic love," she recalls, "but I felt sure it involved passionate struggle on exotic frontiers." The idea of wanting to marry someone you'd known all your life and then to live in the same small town where you grew up was inconceivable to her.

Yet Mary and Fred's story much resembles that of Mead's own parents, and it is only as an adult, who will never experience a "love rooted in a single place, for a life's length," that Mead is able to view the "accomplishment of early-dawning, long-lasting love with something like awe." One of the closing notes of "Middlemarch" is an image of Mary and Fred, decades later, "in white-haired placidity," savoring just such a bond. "This passage had no particular resonance for me when I was young," Mead writes, "but now it thrills with depth and suggestion," especially since "nearly sixty years after their wedding day, my father died with my mother by his side, holding his hand and speaking softly to him of sweet memories in common."

The observation that we read the same novel differently at different points in our lives -- that in a way it becomes a different novel with each reading -- is far from new. But it would be difficult to find a novel more likely to reward multiple rereadings than Eliot's -- or a richer, more complete or more moving demonstration of its lasting power than "My Life in Middlemarch."