Desensitized to horror: When mass shootings stop shocking us

Whether it happens in a suburban mall or on an inner-city street, we can't afford to get hardened to gun violence 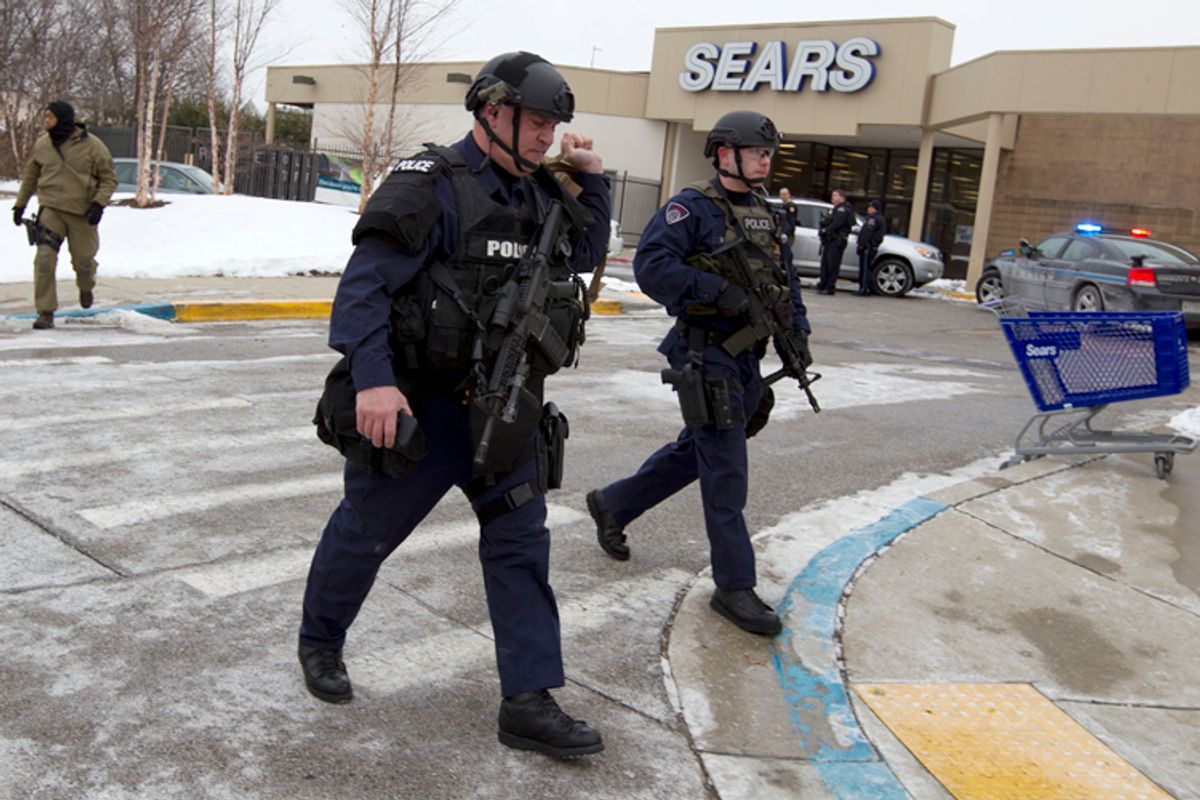 Police move in from a parking lot to the Mall in Columbia after reports of a multiple shooting, Saturday Jan. 25, 2014 Howard County, Md. (AP/Jose Luis Magana)
--

The Mall in Columbia is a massive, 200-store structure with a carousel just inside one of its many entrances. That entrance, near Sears and Starbucks on the mall’s second level, is the one that my 3-year-old likes best. We never leave without her riding that carousel, and she has already come to associate Columbia with safety, a break from our usual harried routine at our Baltimore home, 20 minutes north of the mall.

She isn’t alone. Many Baltimoreans and D.C. residents associate Columbia, Md., with serenity. A well-heeled suburb equidistant from our urban hubs, it boasts luxury townhomes and street names inspired by J.R.R. Tolkien and Robert Frost. It is home to one of the state’s most popular concert venues and is known for its rustic Wine in the Woods festivals.

Waking up this Saturday to find that Zumiez, an athletic apparel store not too far from the mall’s carousel, had become the site of three fatal shootings was disconcerting, to say the least. It triggered the instant refrain we always hear following mass shootings in suburbs: “Columbia is the last place you’d expect something like this to happen.”

For bystanders, this is what always seems to make these kinds of murders remarkable; they infiltrate the spaces that have been carefully cultivated -- through high property cost and limited mass transit accessibility -- to keep the violent crime more commonly associated with urban communities at bay.

Suburban mass shootings disabuse us of our faith in that cultivation. If gun violence can breach even our most Arcadian man-made boundaries, what hopes for suburban public safety can we hold?

Meanwhile, residents of Baltimore’s inner city saw a 7.3 percent rise in homicides last year and have already weathered 19 homicides in 25 days this year. We are all equally entitled to safety -- and every loss of life should evoke within us the same shock, public outcry and call to justice. But inner cities like Baltimore’s have long accepted that the killings regularly occurring in their close-knit communities no longer register more than mild alarm, when reported to the residents of their surrounding suburbs.

Victims of violent crime in inner cities often feel abandoned. There exists no emotional coalition against open fire on the unsuspecting citizens of these communities, no country-wide outrage when they are slain.

Suburban desensitization to urban violence isn’t acknowledged much, but it’s hard to ignore when crimes like the Mall in Columbia shootings occur. In cases where media cannot separate its surprise that such a horror could befall “this community” from its reporting of the crime itself, there’s a tacit suggestion that residents and patrons of affluent enclaves should be insulated from gun violence, in ways that members of their lower-income neighboring communities are not.

How we report and discuss gun violence matters. As mass shootings spike at grade schools, universities, movie theaters and malls, we run the risk of becoming desensitized to them, as well. If we treat suburban mass shootings as isolated incidents and frequent inner-city homicides as a separate problem, to be handled within those communities alone, we are forging a very dangerous future path.

The way society regards communities where gun violence is already concentrated serves as a model for how we may eventually begin to treat mass shootings. The latter are no longer quite so “isolated,” and their increased frequency is beginning to affect our level of surprise when they’re reported.

In the past two years there have been three shootings in malls alone. The Washington Navy Yard has been the site of a massacre. In the last week, gun violence and threats have cut through the tranquility of high schools and colleges in Indiana, Oklahoma, Colorado, South Carolina and Pennsylvania. More and more often, the well-rated elementary and middle schools to which we entrust our children are becoming sites of gun violence.

Had you heard about each of these incidents? Did you follow their reporting well enough to register how frightening they must’ve been for the students and parents, workers and patrons in their proximity? Can you recall the names of the victims? Do you believe any of us can afford to be dismissive when the killer’s motives are revealed as seemingly obscure?

We can’t let go of the victims. Find something memorable or relatable in what you learn about every life lost. I will remember Brianna Benlolo as a mother of a son who is still a baby. If she ever brought him with her to the mall, he likely lit up when he saw the carousel, too. Benlolo was 21 and an employee at Zumiez. Tyler Johnson, 25, was her co-worker. I will remember his Facebook page and how it reveals his travel to Paris. You should remember them, too.

But also remember Frank and Anthony Turner, the 48-year-old father and 21-year-old son who were gunned down on New Year’s Day, becoming Baltimore’s first homicide victims of 2014. Remember Oluremi Thomas, 36, and Keyonna Proctor, 24, who were shot in D.C. on Jan. 20. Call the names of every child and teacher lost at Sandy Hook Elementary. Understand that grief keeps no record of where shootings “shouldn’t ever happen” and that for the sake of grieving families and of our own humanity, we can’t continue making such distinctions, either.

There isn’t a single community left in this country whose residents can honestly claim that they “never” thought gun violence would directly impact them. As the myth of suburban safety breaks down, our generation finds itself at a moral crossroads. We can accept that, given the current state of firearm laws, there is no “us” and “them” when it comes to who is at risk of being shot in any U.S. neighborhood. Or we can start to blame the mall patrons or the school students or the military personnel who “allowed” the shooter to follow through on his or her plan. We can glance at the reports as they flash across news screens and, upon realizing that the crime was targeted and not random, breathe a sigh of relief and continue believing our neighborhoods aren’t at risk. Considering how this latter course has played out for inner-city communities, we stand to lose more than lives if this becomes our tack. Indifference to any gun death, whether far or very near, will mean a slow erosion of our souls.