GOP's hot new craze: Why everyone wants to give a State of the Union response this year

After the president, Americans will hear from the Republican Party, the Tea Party and also Rand Paul 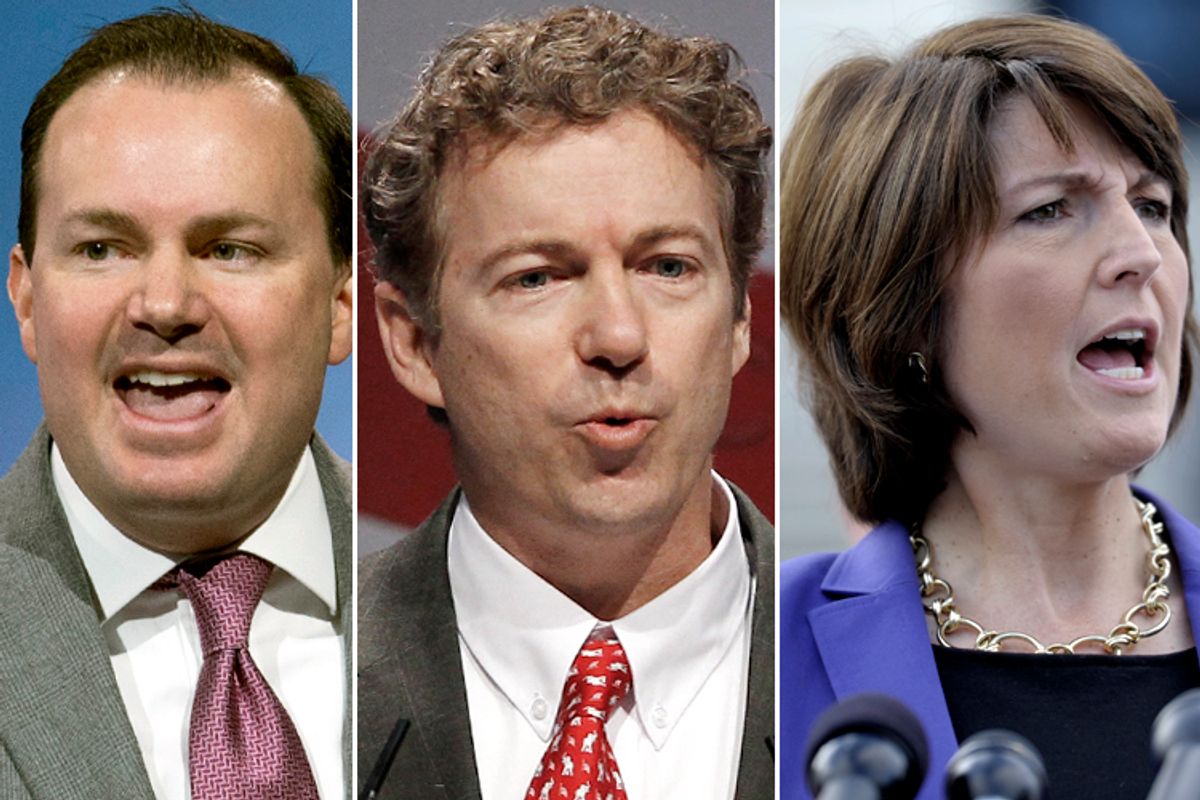 Are you ready for the television event of the year? That's right: It's almost time for the annual State of the Union address and its rapidly multiplying responses. Tomorrow, following the president's address, Americans will also (if they choose to) hear from three separate elected Republicans. Because if there's anything Americans love more than lengthy speeches from politicians, it's three successive lengthy speeches from politicians. Maybe this year my pitch for C-SPAN Redzone will finally catch on?

Last year, the official Republican response to the president's State of the Union address was delivered by a famously parched Sen. Marco Rubio. Then there was another response, from Sen. Rand Paul, representing the Tea Party. This year, Rep. Cathy McMorris Rogers will deliver the official Republican response, followed by a Tea Party response from Sen. Mike Lee. And then Rand Paul will also deliver a response, representing ... himself.

When Michele Bachmann delivered her "Tea Party" response to the State of the Union in 2011, it seemed unlikely to become a tradition. But the next year, presidential candidate and pizza magnate Herman Cain delivered his own Tea Party response. Then came Paul, who apparently enjoyed it so much that he decided to deliver his own totally unaffiliated response speech Tuesday, to be posted on YouTube and sent out directly to his followers and fans via his email list.

Traditionally, the official opposition party response to the State of the Union was an opportunity to take advantage of free airtime to deliver the party's official platform and message to a captive national audience (back when the speech was the only thing on TV). The response was sometimes used to showcase a party's rising stars, but it was also common to have it delivered by recognized and respected senior members of Congress.

But the official response is a thankless, largely pointless assignment. The responder doesn't have the benefit of the president's large audience and impressive backdrop, they have little advance knowledge of what they are responding to, and, let's be real, no one's paying attention. Official responses have done next to nothing for opposition parties. (Not that the track record of State of the Union addresses is so hot either. Let's just go back to making it a brief letter delivered whenever a president feels like it, and save all the political bloggers the trouble of liveblogging it.)

But what if the responder wasn't hemmed in by the requirement that they represent their entire party, and appeal to as broad an audience as possible? What if the response could be used purely for naked self-promotion, and narrowcast solely to the true believers? Then the response morphs from a mostly thankless burden to a canny campaigning and fundraising opportunity.

Rand Paul's response won't be on the networks, because Rand Paul's audience isn't everyone, and his intention isn't necessarily to persuade the median voter. He will sit for cable news interviews after the speech, and hit up the Sunday show circuit a few days later, because he's still campaigning for 2016 and needs as much free media as possible, but a YouTube response sent directly to people who already support Paul is mainly about energizing and expanding his list.

And that's sort of the problem the Republican Party faces right now: For Paul, there's not really any reason not to distract from the "official" party response with a nakedly self-serving bit of early campaigning. There's nothing stopping whomever wants to declare themselves "the Tea Party" from delivering a response too, because part of identifying with the Tea Party is rejecting the "Washington" leadership of the GOP. (The percentage of Americans identifying as "independents" is at a 25-year high, and many of those "independents" are partisan Republicans rejecting the label for various reasons.) It's good for building up your list, and a good list is what makes a successful modern politician.

Giving an unsanctioned State of the Union response isn't quite the same level of leadership-defiance as, say, launching an unsanctioned, time-wasting stunt "filibuster" (speaking of which, why, exactly, isn't Ted Cruz also responding to the State of the Union?), but the responses are multiplying for the same reason phony talking filibusters suddenly caught on among Senate Republicans last year: because the GOP is effectively leaderless and acting like a rebel insurgent is the only way to win over grass-roots conservative voters.

In other words, expect even more responses in 2015.