On Grammy night, no one in the music industry knows what works

Beyoncé is the only pop star who\'s broken free of the old model -- can the Katy Perrys of the world figure it out? 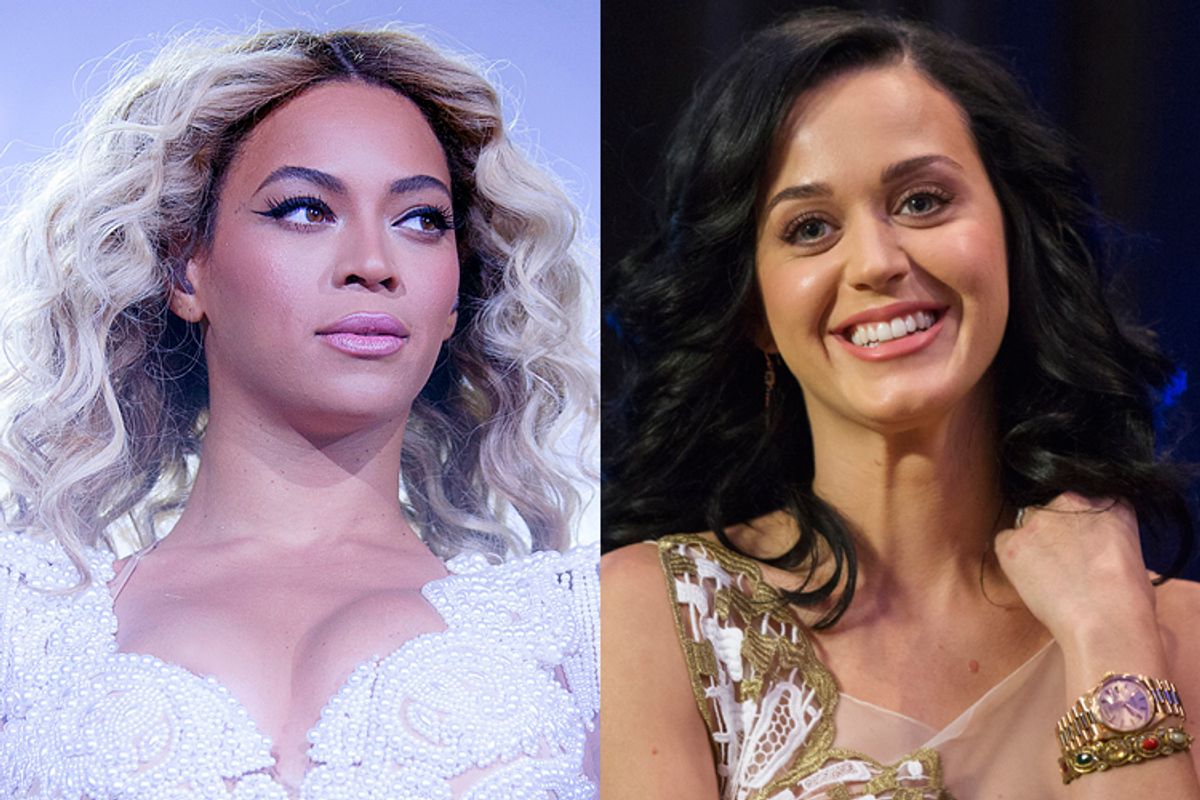 The Grammys tonight will feature performances by two musicians who had radically different 2013s. Beyoncé spent the year on a lengthy tour with anticipation mounting for an album she had never acknowledged she was working on, trying out different songs in commercials before -- surprise! -- dropping a self-titled album onto iTunes in the middle of the night. It had seemed that a burst of promotion she'd done at the very beginning of the year had been wasted effort; instead, it became clear her new record didn't need the promotion in the first place. She's since released two songs off the record as singles, but the album was designed to be bought all in one piece -- all without a single track getting previewed on a live performance or on the radio.

Katy Perry, by contrast, went through the paces in the run-up to the release of her album "Prism"; covers of Vogue and Entertainment Weekly, talk-show appearances, a performance at the end of August's Video Music Awards, set up in opposition to putative rival Lady Gaga's number at the show's start. And though "Prism" debuted at number one on the charts and lead single "Roar" was huge, the follow-up "Unconditionally" wasn't nearly as strong a chart performer as any of Perry's nine singles since 2010, peaking at 14 on the Billboard Hot 100. Her label had invested significant resources into "Prism," and Perry seemed at least temporarily against the ropes.

Particularly among female pop stars, the perception of rivalry has become the coin of the realm. "Roar" and Lady Gaga's "Applause" were put into a perceived "chart battle" that Perry won, but it was a pyrrhic victory; with her widely-remarked-upon performance, Miley Cyrus consumed all the oxygen at the Video Music Awards and had a number-one single by early fall. (The awards ceremony, designed as it was to be bookended by established stars on lengthy promo cycles, thus provided one of the year's many surprises.) A New York magazine cover on Taylor Swift pointedly noted in its headline that she was a bigger pop star than Perry, Cyrus or Gaga. Around that time, the writing was on the wall about Gaga's luxuriantly promoted album "Artpop" -- its lengthy roll-out, complete with Jeff Koons album cover and two-day release party, came to seem utterly vexed, with misinformation about the cost of the album's promotion seeming credible enough to end up reprinted in major news outlets. Young star Lorde found herself the subject of controversy, time and again, for seemingly insulting remarks about Taylor Swift and Selena Gomez, inadvertently playing into a public appetite for female artists fighting over slices of a smaller and smaller pie. At the end of the year, pop culture provocateur Perez Hilton posted a GIF of Beyoncé pushing albums by Lorde, Perry, Cyrus, Gaga and Britney Spears off a table. It really was, in ways Hilton couldn't have known, the GIF of the year.

The problem was that not every fixed idea at the end of 2013 was accurate. "Artpop," relative to its performance, seemed vastly more like a "flop" than it had been. That perception came thanks to a series of unlucky turns (the fate of single "Do What U Want," whose R. Kelly feature seemed in poor taste once allegations of his sexual impropriety resurfaced, among them) and a general market correction from Gaga's onetime most-famous-singer-on-earth status. "The idea that it's hard to sustain that frenzied level of engaged popularity that Lady Gaga had when she was on top of the world with 'Just Dance,' 'Poker Face,' and 'Bad Romance' -- that can't necessarily last at that level forever. Every artist has ebbs and flows and I think that it's hard to sustain that momentum," said Keith Caulfield, the associate director of charts at Billboard. "These comparisons that people try to make from one album to another -- it's just not that easy sometimes."

Similar comparisons between Perry singles, Caulfield said, were equally ineffective: "Unconditionally" "certainly was not not a hit, it was still a top 20 record! It performed quite respectably."

So why are pop fans so eager for a narrative whereby an artist either unequivocally succeeds or utterly fails? It was easy, in media-saturated 2013, to view an artist's traditional promotional cycle as exhausting. Longtime pop-world observer Maura Johnston, Journalism Fellow at Boston College's Institute for the Liberal Arts and editor of Maura Magazine, noted the particular case of "Artpop"'s drawn-out release cycle: "The genesis of it was so long -- the period after [prior album] 'Born This Way''s release was two years, which five years ago would not have been too long. But in the era of hyper-compressed promotional cycles, it seemed like a lot for not a lot of payoff. It got to the point of 'Release this damn record already!'"

No wonder bloggers (including Salon's) didn't give Perry a pass for her cloying, racially tone-deaf geisha performance of "Unconditionally" at the American Music Awards, one that failed to push the song into the top ten even though race shtick had helped Gwen Stefani back in the 2000s. "There's an idea that the public, the people leading the discussion, bloggers who have to cover every move of a pop star, get bored of feeling things play out over a long period. You see resistance creep in to covering publicity stunts that would've been par for the course two years ago."

And yet it's difficult to figure out a different way to roll out a record. As "I Want My MTV" co-author Rob Tannenbaum told Salon, "One of my pet theories is that 98 percent of the music business is predicated on imitation -- the music business doesn't seem to believe that old ad that says 'Past results are no indicator of future performance' -- but if you go back to the Beatles, the acts that made the biggest impact, they didn't sound like anyone else when they came out, like the Eagles, Madonna, Metallica. The safe and easy thing to do is to sign a band that already sounds like a successful band" -- and to market that music in the same way. So where does this leave pop stars looking to excel who do not sound radically different? They can either, as in the case of Cyrus, take the utmost advantage of every opportunity to shock -- but it has begun to seem as if the only difference between the world-beating Cyrus and derided Gaga is the former's novelty. How long will it be before the music press falls out of love with covering Cyrus's every outfit and stunt-y performance? Cyrus herself acknowledged in an interview with the New York Times that "two years from now" there would be styles of provocation she wouldn't recognize.

The only other option is to literally be Beyoncé. Though many musicians -- including Daft Punk, Jay-Z and David Bowie -- released albums in an unconventional manner in 2013, Beyoncé's method was incredibly particular to her level of fame and to her work habits. "It doesn't mean we can't learn something from what she did," said Billboard's Caulfield. "Artists can ask: What can we take from this and apply to our situation? U2 has a new record -- they may be asking, What can we do that has the gloss of this? Madonna, too -- people of that nature."

The Perrys and Gagas of the word, though, not quite at Beyoncé's level of success and locked into a rigid single-album-further-singles-then-tour model whose only constant is fluctuating returns, have more to worry about -- at least until they, too, figure out a new way. "There are certain consistencies in the music business. There's a thing called an album, a thing called a single, and a tour. But all those things can all be wildly different in terms of how they're promoted and created," said Caulfield, citing the uncertain prospect of the streaming service Beats Music as an example of something that might wildly change the music industry -- or might not. "Things change so much, things are changing on a daily basis. Whatever seems like a brilliant idea today may not be three months from now." We have no idea what will be happening to Beyoncé in three months. Perry's tour to promote the successful but old-school "Prism" begins in May.