The handbook implies that if cheerleaders are lied to or sexually assaulted by players, it's their own fault 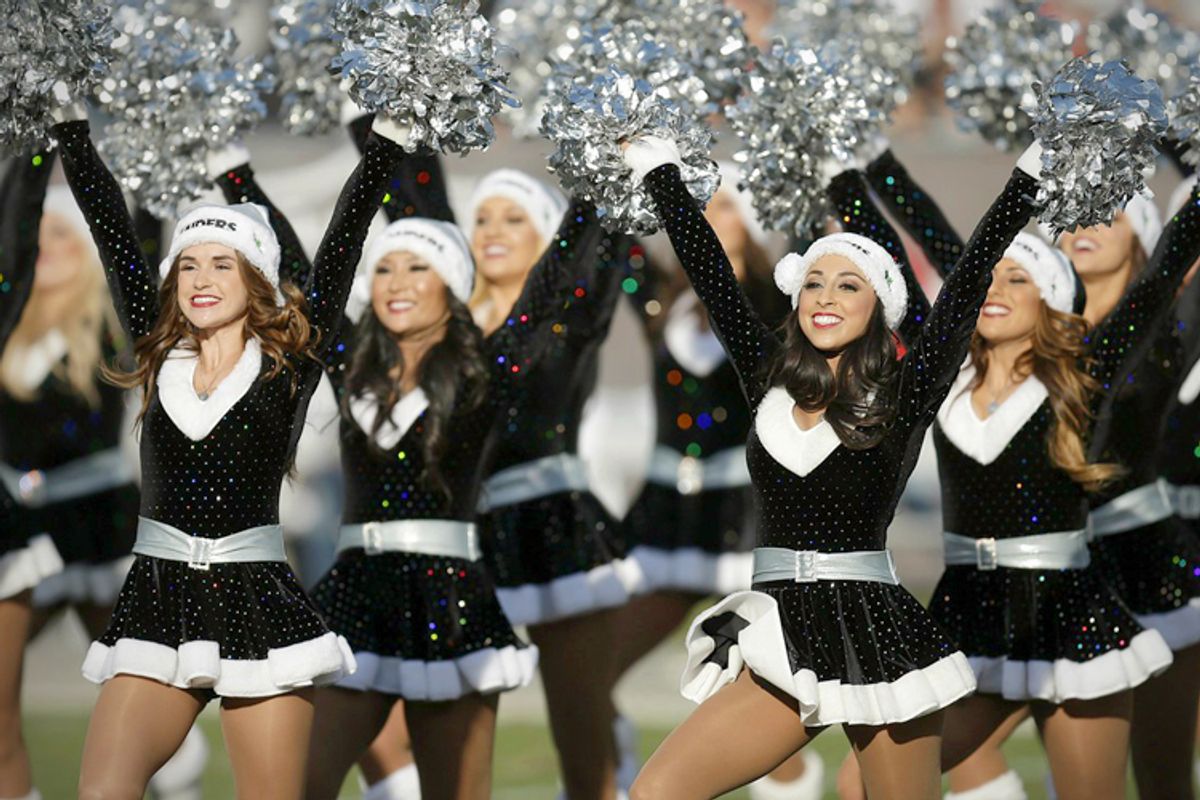 The Oakland Raiders organization wants its cheerleaders to behave like ladies. It has, according to a Monday report in the L.A. Times by Robin Abcarian, a "super-secret official" handbook for its Raiderettes, which includes advice like "Keep nail polish pads in your car for emergencies. Smile, shake hands with everyone," and "If you don’t like your meal, try a little of everything and strategically move the rest around your plate."

And try not to get raped by any of the players, because that really looks bad.

In a section of the book about fraternization, it acknowledges, "There have been a few relationships between the two groups that have resulted in a few happy marriages and lovely children," but goes on to warn, "HOWEVER, we have also had more situations where, quite frankly, the Raider organization and the Raiderettes narrowly escaped ruined reputations." It goes on to elaborate: "One such example concerns a player who gave Halloween parties every year and many of the Raiderettes attended. This same player was suspended from the team for drug use but also arrested for date rape. For you on the squad who have attended those parties, just think how narrowly you missed having your photo in all the local papers and/or being assaulted." And/or. Whatever. But mostly, think upon how you might have sullied the team's good name by getting in the papers. For being raped. Oh and by the way, the definition of date rape is rape. It's even in the state penal code!

The team, which last week was also hit with a lawsuit accusing it of violating California labor laws "by failing to pay [the cheerleaders] adequately or on time," does not name the player. But the handbook may be alluding to the late defensive tackle Darrell Russell, who in 2002 was accused, along with two other men, of drugging and raping a woman Russell had been "casually dating." The case was eventually dropped because it couldn't be proved beyond reasonable doubt.

After explaining that you might wind up being assaulted, the handbook goes on to explain, "For this reason, RAIDERETTES ARE NOT ALLOWED TO ATTEND PARTIES AT PLAYERS’ HOMES…FOR THOSE OF YOU WHO DATE A PLAYER OR FORMER PLAYER, MAKE SURE HE UNDERSTANDS THAT PLAYER PARTIES ARE OFF LIMITS TO YOU." There's also advice to "Make a point to find out if a player is married. In most cases, he won’t tell you! You can call the Raider office with questions about marital status and I encourage you to do so. Again, he will not tell you he’s married!" Because men lie! It's your job to find that out! And it concludes, "There’s not a female alive (or male either) who doesn’t like attention. But you need to learn to deal with attention you receive from the public (and especially the players) without it getting out of hand and going to your head…. Some teams who previously had cheerleaders do not now have them (Chicago Bears). Because of morality problems with their squads, they decided cheerleaders were too much trouble to deal with."

So let's assume that the Raiders might also have some super-secret guidebook that tells its athletes stuff like, hey, don't rape the cheerleaders, and don't cheat on your wife. It could happen. But let's just boggle over its advice to its cheerleaders for a moment or two anyway. It demands they look good, but "deal with the attention" without letting it go to their heads. It mentions sexual violence as something they have to prevent, something that, if it happens to them, will bring shame to them and inconvenience to their employer. And it says that if you've got men who lie and cheat, there's a "morality problem." And it's you, lady, who are expendable. It's you who are "too much trouble." It's an alleged handbook for cheerleaders, but sadly, it's a playbook for how our culture talks to women in general.