GOP is melting down: The real SOTU story

The president's speech was a conciliatory, modest affair. But with enemies like these, it's hard not to be a winner 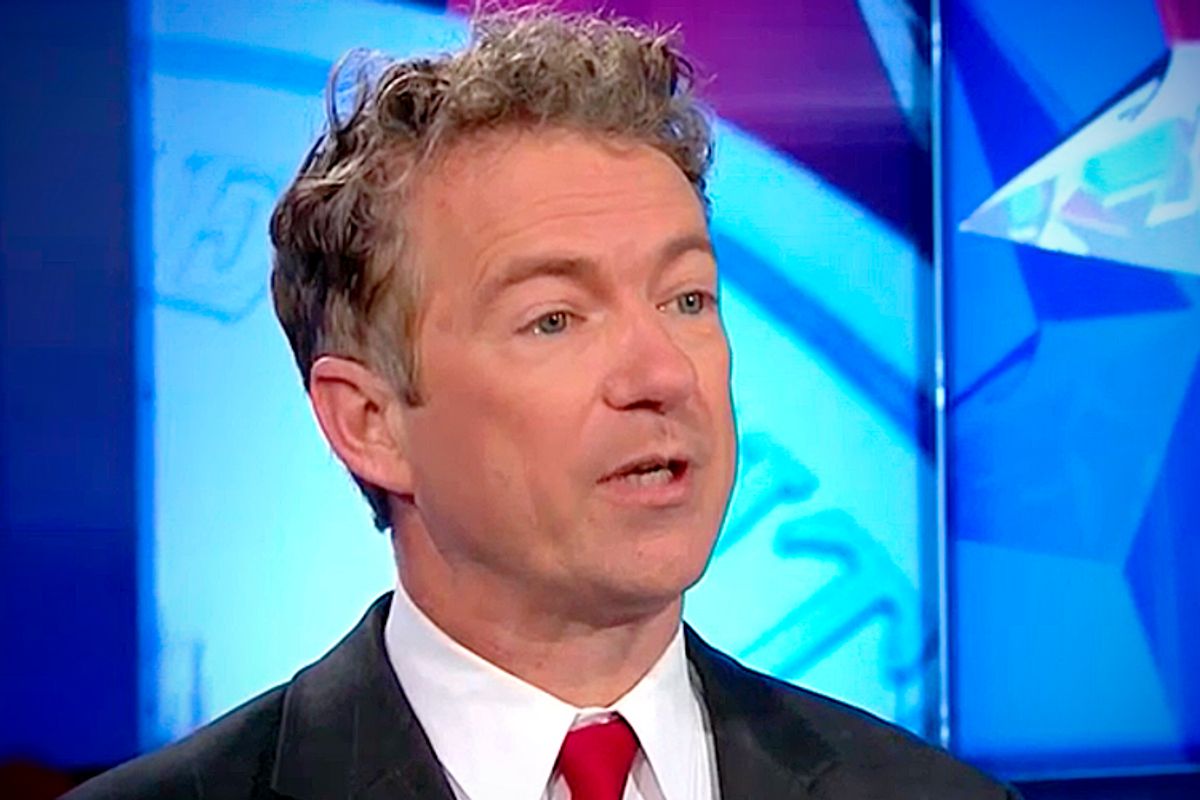 President Obama’s staff hyped his State of the Union address as promising a bold new reliance on executive action, and really, who could blame the guy? Tuesday came the bizarre news that there were going to be four – four -- different GOP replies to the State of the Union address. To work with Republicans Obama would need actual Republican leaders, and instead he’s dealing with hundreds of freelance potentates and kooks.

The GOP is splintering in real time, and that’s a bigger story than anything the president said in his 70-minute address. Sen. Rand Paul even gave what was billed as “the Rand Paul response” -- as though he’s his own political party, and maybe he is -- in which he billed African-American GOP columnist Star Parker as the answer to poverty. (More on that in a second.) Meanwhile, waiting for the president on the floor, Rep. Joe “You lie” Wilson snapped pictures of Duck Dynasty’s Willie Robertson, who also frolicked with Rep. Paul Ryan.

Still, there was a strange disconnect between what the president’s advance people advanced, and what he actually said. Obama did announce one bold decision that will actually change lives: an executive order to increase the minimum wage for federal contract workers. But for a speech that was promoted by staff as a bold take-charge moment for a president tired of being thwarted by the GOP, and derided in advance as the equivalent of a martial law declaration by the right, it was unexpectedly conciliatory and short on concrete action.

Apart from the minimum wage order, Obama mostly outlined a bully-pulpit approach to the next year: He’s “pulling together” all sorts of “new partnerships” and “summits” and “calling on Congress” and “cutting red tape” and proposing a new federally backed type of IRA called, yes, myRa. Obama may have talked toughest to his fellow Democrats in the Senate when he promised, appropriately, to veto a bill that would tighten sanctions on Iran.

Another SOTU leak revealed an internal split over whether Obama should stress “income inequality” or “opportunity,” and revealed that “opportunity” won because apparently income inequality is a big downer and sounds like class warfare. In the end, the president did mention income inequality while stressing “ladders of opportunity,” but the preliminary hype made me more sensitive to his disappointing storytelling: Obama blamed the decline of opportunity and the rise of inequality on “massive shifts in technology and global competition,” but left out the deliberate shift of wealth and power from the majority to the top 1 percent, and the deliberate dismantling of “ladders of opportunity” that began under Ronald Reagan and continue through today.

Overall, it was a well-delivered but tepid and still disappointingly cautious speech. He made a great joke about “Mad Men” policies toward women, but given the way Republicans have escalated the War on Women just this week thanks to Mike Huckabee and Rand Paul, he missed opportunities to highlight his party’s superiority, especially given the House voting for more restrictions on abortion just hours earlier.

Once again, though, as throughout his career, the president is blessed by having lame enemies. In her SOTU response, Rep. Cathy McMorris Rodgers ironically decried government "controlling" our healthcare while of course ignoring her role in the earlier House vote on controlling women’s bodies. Rand Paul avoided craziness about Monica Lewinsky but he advanced warmed-over enterprise rhetoric from the 1980s in his straight-to-YouTube extravaganza. Its highlight was a bizarre tribute to Star Parker, who by her own account went from welfare fraud to Republican stardom. "I want Star Parker’s story to be the rule, not the exception," Paul said bizarrely. Also "Federal Reserve," "Milton Friedman" and "Solyndra."

The four random GOP rebuttals and the party’s shrill response only made Obama’s speech seem better as the minutes pass.